Donate Now
In Greece, a recent high-profile court ruling and policy change mark momentous human rights victories for migrants and children. On October 7, an Athens court ruled that the country’s far-right xenophobic political party, Golden Dawn, whose members had seats in Parliament, was operating as a criminal organization. It also convicted some of its members of beating and even killing migrants, asylum seekers, and activists. Then, on December 10, Greece’s parliament abolished the harmful practice of detaining asylum-seeking and migrant children who arrived in Greece without their parents or a guardian, in place since 2001. Amy Braunschweiger speaks with researcher Eva Cosse, who has tirelessly advocated on these issues for a decade, about this hard-won impact and what happens next.

When did you start working on these issues?

I began working on racist violence in Greece, together with my colleague Jude Sunderland, back in 2011. Racist violence was widespread. I’m Greek, and I would go to my village and discuss my work with people, and no one was feeling the way I was feeling, horrified by the fact that people with a different skin color, women, children, were walking on the streets of Athens and getting beaten for the way they looked. Then, in 2012, Golden Dawn, a neo-Nazi anti-immigrant party won 6.92 percent of the votes and entered parliament for the first time. It was shocking. I felt ashamed – this was happening in my country.

What happened after you published your first report on racist violence in Greece in 2012?

Initially, the government turned a blind eye to what was happening, saying “Greece is known for its hospitality.” But during a hearing in the Greek parliament in November 2012, where we presented findings on xenophobic violence, one ruling party parliamentarian called foreigners coming to Greece “cockroaches”. Also, people who went to report such violence were arrested or intimidated by authorities, or even threatened with deportation.

But the release of our report coincided with the time Golden Dawn entered parliament, and suddenly all European and international media wanted to talk about it.

We spent much of the next year advocating for change. We published something on every development on racist violence I was able to investigate and sent briefings to European decision-makers visiting Greece. I did media interviews. I met with people in Brussels, and in Greece had meeting after meeting with ministers and police. 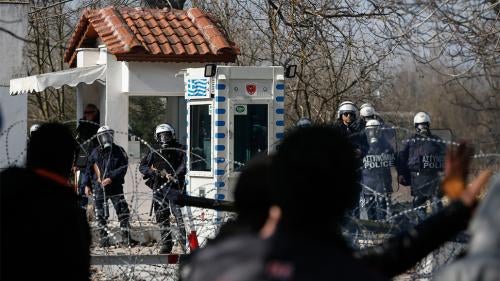 One of the first changes was reform within the police. They created special anti-racism units to investigate racist violence. Then we saw the appointment of specialized prosecutors for hate crimes. In 2013 we started seeing the very first arrests and prosecutions for racist violence, and in 2014, a law was passed that made it easier to prosecute people for hate crimes. This sent the message to perpetrators that racist violence is not tolerated, and attacks started decreasing.

These changes gave me hope. Even with an anti-immigrant government, because they cared about what we said. With the 2014 anti-racism bill, our then advocacy director and I literally sat with the minister of justice for three hours, going through the bill word-by-word, telling them how to improve it, what we didn’t agree with, what should change.

Tell me about the trials that followed.

The case of Ali Rahimi, an Afghan asylum seeker who was stabbed 5 times in central Athens in 2011, was the very first prosecution of its kind. At the trial, it was mostly Golden Dawn supporters outside the courthouse, supporting the defendants. It seemed to us as if officials weren’t taking his trial seriously, and it was postponed many times.

At one of the hearings, one of the defendants accused of attacking Rahimi actually spat on me and Rahimi’s lawyers. That was the climate back then.

His attackers were finally convicted in 2017. Because of the legislative changes we pushed by then, people started going to prison for racist attacks.

How did the Golden Dawn case, which drew on a number of different crimes, come together?

The landmark moment was the killing of Pavlos Fyssas, a Greek antiracist rapper and activist. He was stabbed to death by a Golden Dawn member in September 2013, roughly a year from the publication of our report Hate on the Streets. In Greece we say, “it’s the drop of water that made the glass overflow.”

There was a huge public outcry. And suddenly, with a push from the government, prosecutors brought all the cases they had against Golden Dawn together under one file, and that’s how the Golden Dawn leaders, who were also members of Greek Parliament, were arrested in 2013. We’re talking about serious attacks against migrants, unionists, activists, and other serious offenses.

What was it like the day the Court convicted and sentenced the Golden Dawn leaders last October?

Despite Covid, there were maybe 20,000 people waiting outside of the courthouse for the verdict, Greeks, migrants, from all parts of society. Golden Dawn’s popularity had sunk. Groups like Golden Dawn Watch did social media campaigns, and a few weeks before the trial, many of my friends on Facebook changed their profile picture to one that said, “They Are Not Innocent” – even people I didn’t expect to see there. It was a huge moment of solidarity towards the victims and against Golden Dawn and their crimes.

That doesn’t mean that racism or xenophobia does not exist in Greek society anymore. Still, I saw an important change. When we saw the waves of refugees reaching Greece’s shores in 2015, the government that was in power then used words like “refugee” to describe these people, not “illegal migrants.” In turn, you saw the media talking about women and children, publishing stories that humanized them.

In my village, the same people who were talking to me before about illegal immigrants, started talking about refugees. They started asking me questions about who are these people, what are their problems, what do they need? People at this time started volunteering and opening up their houses.

This shift has reversed course as a new, anti-immigrant government is in power. And while we are seeing attacks against migrants again, there is a huge difference now. There are anti-racist police units, specialized prosecutors, a strong legal framework against hate crimes, and convictions that send the message that there is accountability for such acts. 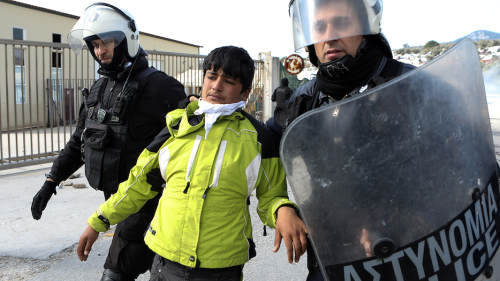 You’ve also been working for years on how children who arrive in Greece alone, without parents or guardians are treated, how they’re often held for months in jail cells with adults.

We published reports in 2008 and 2016 on the detention of unaccompanied children in Greece. In 2019, when the US held children in cages on its Mexico border, there was a huge public outcry in Europe against it. Yet Greece had been detaining children in terrible conditions in police custody for almost two decades and there was no outcry from European officials. Given the pushback we saw on migrant issues with Greek and European decision-makers, we decided we needed to frame this problem as a children’s rights issue. We launched a public campaign in April 2020 that did just that.

We did a lot of work on social media. We sent a letter to Greece’s prime minister and requested a meeting with the special secretary for unaccompanied children, telling them that they needed to release all kids from detention, and end the detention of children by changing the law. We pushed the issue of unaccompanied children with the European Commission, the European Parliament, and the Greek government. We also asked members of the European Parliament to write a letter to Greece’s prime minister about this.

Then, about a month ago, I saw the announcement in an Associated Press article that Greece will stop detaining unaccompanied children, and that as of November 14, no unaccompanied migrant children remained in police custody. It was amazing. When we met with the government’s special secretary for unaccompanied children, she acknowledged that our campaign played an important role in pushing this. Three weeks later, on December 10, Parliament adopted the law abolishing the practice.

There were times when the situation for asylum seekers in Greece could have seemed hopeless. How did you keep going?

I was so passionate about what was happening because I’m Greek and because I love the work I do. And because the victims that I spoke with gave me hope that things can change. They gave us the power to pursue justice for them. And that made me excited, so I didn’t lose faith.

When this type of impact happens, it gives you confidence that things can change. You feel more powerful than before. An issue we’ve been working on for years is pushbacks, when asylum seekers who reach the Greek border, via neighboring countries like Turkey, are summarily and in violation of their rights, forced back or out of the country by Greek officials who often beat them. This is illegal under international law. The Greek government is denying it’s happening, and no official has ever been arrested. It’s happening at other European borders, too. I’ve been working on this issue for 10 years and am still waiting for change – but I will continue working on it until we change this. I want to be hopeful that someday we can put an end to these horrible abuses.