Donate Now
On a hot morning in late May in the town of Ariha, in the northwest Syrian governorate of Idlib, Fadel Faham’s elderly mother woke him up at around 9:30 in the morning and asked him to go to their family’s café. He put on a light T-shirt to keep cool in the summer morning heat and walked to the nearby café, leaving his wife, his mother, and children at home. Two of his five children, aged 4 to 9 years, were still sleeping when he left; he didn’t say goodbye. He worked at the café until he heard the afternoon call to prayer from a nearby mosque. Fadel went to the mosque and prayed alongside many others. They were just about to finish prayers when they heard a warplane thundering past overhead, and an explosion soon after. Everyone ran out of the mosque in a panic to see what had been hit.

Fadel knew well that the sound of a warplane likely meant death. But he didn’t yet know one had struck his home.

This airstrike by the Syrian-Russian military alliance occurred on May 27, 2019, during the Muslim holy month of Ramadan. At the time, Idlib was one of the last areas under the control of anti-government armed groups in the almost decade-long civil war. The strike killed at least 13 people, according to new research by Human Rights Watch, and damaged a school in the Bistan Street neighborhood.

The report examines 46 attacks in Idlib during the most recent offensive there, which lasted from April 2019 to March 2020, destroyed homes and marketplaces, and devastated schools and hospitals, in some cases until they closed permanently, killing hundreds of civilians. Syria and Russia have sought to justify attacks on civilian objects and infrastructure as part of counterterrorism efforts, but Human Rights Watch did not find evidence of any military targets in the immediate vicinity of the attacks. Over one million people in Idlib are now displaced and on the run, struggling to rebuild their lives, and still no one has been held accountable for these unlawful attacks.

Fadel spoke with Human Rights Watch by phone. He is 36 years old. In his social media profile photo, he looks directly at the camera, with his children next to him smiling happily. The youngest twin daughters wear flowery headbands and similar brightly colored outfits. The photo captures happier times for the family of seven. Now only three are alive. 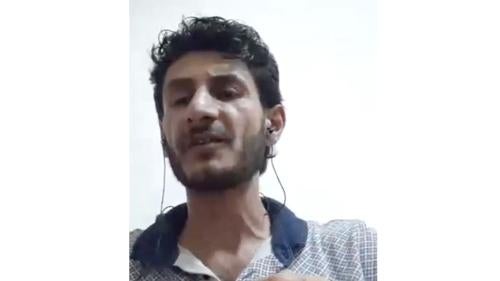 At the time, Fadel said that the cloud of dust in the direction of his home worried him, but he couldn’t see much. He wanted to go and help with the rescue efforts. Someone told him that it was a neighborhood electrical generator that had been hit, but another person told him that the explosion had come from closer to his home. Everyone was running towards his neighborhood and he followed them, hoping for the best. He knew his children, wife, and mother were home at the time of the strike. As he got closer, his heart sunk. Then he saw through the cloud of dust that two buildings had collapsed. His home was in a four-story apartment building that had been hit and brought to the ground. People were crying and shouting, desperately trying to find their loved ones.

He knew his family lay somewhere beneath all the rubble.

He started digging through and was soon joined by the Syrian Civil Defense (also known as the White Helmets), the rescue group operating in nongovernment-held areas. They pulled women and children from the debris, many with visible injuries, including broken limbs; some were dead. Fadel felt tremendous horror as they found three of his children and his mother dead in the rubble. Another two of his children, his 9-year-old son Zain and 4-year-old daughter Sham, one of the twins, were rescued alive. But the little girl died of her injuries 10 days later. In the end, only his wife and Zain survived.

Fadel and his wife and son quickly fled and settled near the Turkish border, trying to reconstruct some semblance of a new life through the dark cloud of pain and overwhelming loss. When a ceasefire halted the attacks in March 2020, some people returned to what was left of their homes in Idlib. They were met with the devastation of basic infrastructure – greatly limiting their access to food, health care, and adequate housing.

Fadel and his wife and son remain displaced, like hundreds of thousands of other civilians from Idlib. Recently, Fadel started a new job as an ambulance driver for the humanitarian organization Union of Medical Care and Relief Organizations. He works long hours, sometimes up to three days on the job, but for him, the opportunity to help others is important.

The attack in Ariha happened over a year ago. Fadel has witnessed many other attacks since then. He wonders why the Syrian and Russian governments are targeting civilian structures. At his current job, rescuing people from blown-up buildings, schools, and homes has exposed him to others experiencing the same suffering.

Fadel believes that his wife and son still struggle with psychological trauma from the attack. They are skittish when they go out to crowded places in the market and around town, fearing another attack. They are startled by loud noises and sudden movements. He worries about them. His son speaks about his siblings every day. When he has a good meal, he says that he wishes his brothers and sisters were around to share it. During holidays, he remembers how he used to play with them and share gifts. His wife relives the loss of their children daily, as if it happened yesterday.

The attack in Ariha follows Fadel and his wife and son, haunting them and making it impossible to move on.