A spike in violations of the right to free expression during widespread protests at the end of the former government’s term in office and during the Covid-19 pandemic underscores the need for Iraq’s new government to reform its laws, Human Rights Watch said in a report released today. Iraqi authorities, including in the Kurdistan Region, have routinely used vaguely worded laws to bring criminal charges against people who express opinions they dislike.

The 42-page report, “‘We Might Call You in at Any Time’: Free Speech Under Threat in Iraq,” examines a range of defamation and incitement legal provisions that authorities have used against critics, including journalists, activists, and other dissenting voices. The Iraqi and Kurdistan Region parliaments should replace criminal defamation articles in the Penal Code with civil defamation penalties and amend laws that limit free speech to comply with international law. Given Mustafa Al-Kadhimi’s new role as prime minister and his stated willingness since taking office to address some of Iraq’s most serious human rights challenges, the government has a unique opportunity to tackle over a decade of free speech restrictions.

Free Speech Under Threat in Iraq

“The Covid-19 pandemic highlights the vital and sometimes lifesaving role of a robust and inquisitive press and social media,” said Belkis Wille, senior crisis and conflict researcher at Human Rights Watch. “Iraqi leaders should commit to fostering respect for international law as a way to better inform and protect their people.”

Human Rights Watch examined 33 cases involving the prosecution of 21 activists and 14 journalists who suffered attacks, 13 cases involving support of protest activities over social media, and 7 involving coverage of government corruption in mainstream or social media. None of the cases from Baghdad-controlled areas occurred since the current prime minister and government took office. 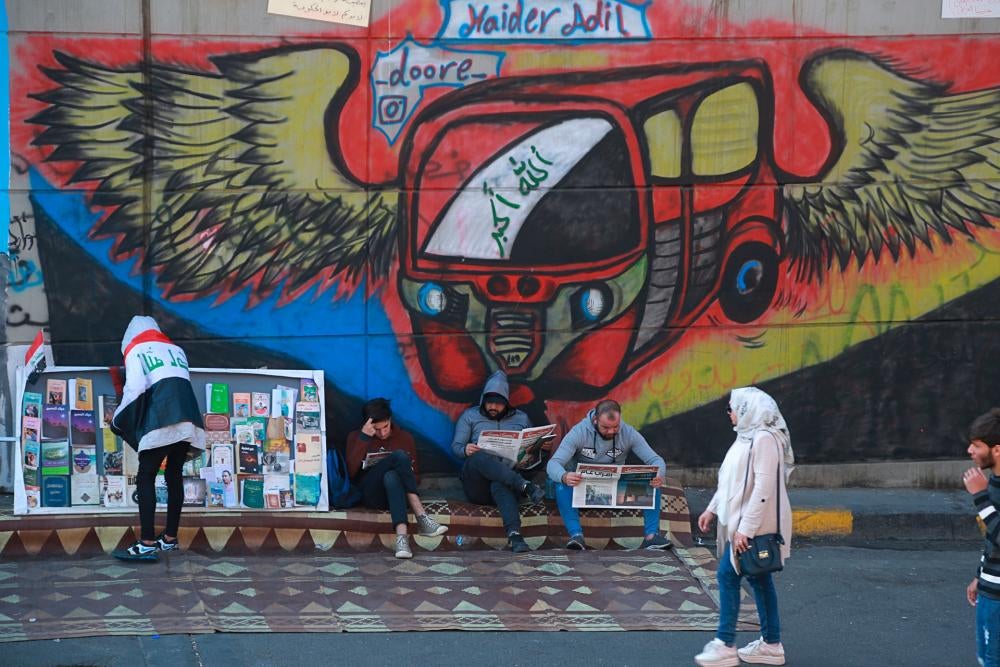 Iraq's new government faces a test as many authorities seek to silence critics with violence, harassment, and prosecution. We spoke with senior researcher Belkis Wille about her new report on the threat to free speech in Iraq and what this important moment means for the country.

Iraq’s Penal Code, which dates back to 1969, includes numerous defamation “crimes” such as “insult[ing] the Arab community” or any government official, regardless of whether the statement is true. Although few people serve prison time for defamation, the criminal process itself acts as a punishment. Reporting on abuses by the security forces or about corruption is especially risky.

Haitham Sulaiman, 48, a protest movement organizer, in an April 6, 2020 Facebook post called on the Muthana governor to investigate allegations of health department corruption linked to the purchase of Covid-19 masks. He was arrested on April 10, beaten, and forced to sign a document stating that the United States had bankrolled the protest movement.

In 2014, the Communications and Media Commission, “an independent institution” linked to the parliament, issued “mandatory” guidelines to regulate media “during the war on terror,” which were updated and renamed the “Media Broadcasting Rules” in 2019 and are still in place today. Human Rights Watch was unable to determine any legal basis for the guidelines or the agency’s actions.

Following the start of widespread protests in October 2019, the authorities ordered the closure of 8 television and 4 radio stations for 3 months for allegedly violating media licensing rules, based on the guidelines, and issued warnings to 5 other broadcasters over their coverage. Unidentified armed men raided and damaged the offices of at least three news outlets in October. In early April 2020, the commission suspended Reuters’ license and fined it 25 million IQD (US$21,000) for an April 2 article alleging that the number of confirmed Covid-19 cases in the country was much higher than official statistics indicated. The authorities lifted the suspension on April 19.

Kurdistan regional authorities are using the region’s penal code, Press Law, and Law to Prevent the Misuse of Telecommunications Equipment to curb free speech. A 40-year-old man was arrested after he live-streamed a demonstration on the morning of January 26, 2019 and charged with Penal Code and Telecommunications Law violations. A judge dismissed the charges and authorities released him after 29 days in custody.

Interviewees who had been criminally charged felt that the prosecutions were to intimidate critics. Eleven said they did not hear from the prosecution for extended periods, leaving them unsure of whether the cases were still active. One said “When the Asayish [Kurdish security forces] released me after I paid a fee on March 10, 2019, they told me, ‘We might call you in at any time.’”

Eleven said security forces had ill-treated them at the time of arrest or in detention. All 14 journalists and 4 activists interviewed said they regularly received threats, usually from anonymous sources by phone or social media, and sometimes from security forces or government officials. Amanj Bakir, a journalist, said that threats he received over two articles about the Kurdistan region in March have taken a toll on him.

On April 29, Human Rights Watch wrote to the Iraqi government and Kurdistan Regional Government soliciting information regarding the cases documented in the report. While the authorities in Baghdad did not respond by the time of publication, the Kurdistan Regional Government responded on May 20 in a “preliminary” manner, stating that the KRG “is committed to the preservation of journalists’ rights” and would follow up with more information.

International human rights law allows for restrictions on freedom of expression to protect the reputations of others, but such restrictions must be necessary and narrowly drawn. Human Rights Watch believes that criminal penalties are always a disproportionate punishment for alleged reputational harm.

Iraqi federal and Kurdistan regional authorities should direct security forces to end intimidation, harassment, arrest, and assault of journalists and others for exercising their right to free expression and investigate credible allegations of threats or attacks by government employees or others against critics.

“Given the mistrust between civil society and the media on the one hand and authorities on the other, Iraq’s new government and Kurdish authorities should reform laws to bring them in line with international standards,” Wille said. “Getting rid of vague provisions on insults and incitement would show that the authorities are committed to protecting free speech.”