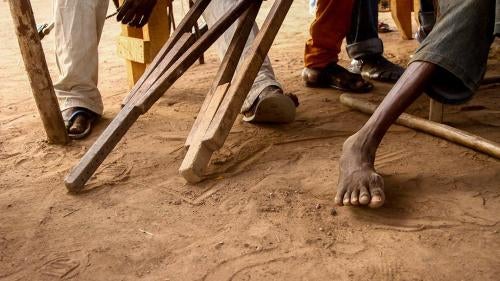 (New York) – The inclusion of the need to protect civilians with disabilities in wartime in the United Nations secretary-general’s new report should help spur action by UN agencies and member states, Human Rights Watch said today.

For the first time in more than a decade, the secretary-general’s 2019 report on the protection of civilians documents the experiences of people with disabilities caught up in armed conflicts. Secretary-General Antonio Guterres urged the Security Council on May 23, 2019, to pay greater attention to the protection of civilians at heightened risk, including people with disabilities and older people.

“One in seven people has a disability – most likely even more during conflicts – and yet they have been largely invisible on the UN’s agenda on protection of civilians,” said Shantha Rau Barriga, disability rights director at Human Rights Watch. “The secretary-general’s decision to highlight this issue should prompt the UN Security Council to make sure its protection of civilians includes all civilians.”

The secretary-general’s report notes that: “Armed conflict has a disproportionate impact on persons with disabilities. People with disabilities may be unable to flee attacks and are left abandoned and unprotected.” The report also documents the risk of exploitation and abuse that women and girls with disabilities face in conflict situations.

The last time a UN’s Protection of Civilians report raised concerns about risks people with disabilities face in armed conflict was in 2007. Then, the secretary-general called on governments and aid agencies to “ensure systematic attention to older people and persons with disabilities in their efforts to protect and assist civilians in conflict.”

People with disabilities who reached sites for internally displaced people or refugees often face difficulties accessing food, sanitation, and medical assistance. Children with disabilities are often unable to attend school or do not have equal access to education.

The 2019 Security Council resolution on the UN peacekeeping mission in South Sudan expressed for the first time “serious concern about the dire situation of persons with disabilities in South Sudan, including abandonment, violence and lack of access to basic services.”

“There were five old and disabled or sick people we left behind,” a 60-year-old man who had fled fighting in South Sudan told Human Rights Watch in March. “In 2017 and 2018, rebels and [the] government attacked and even some time killed those who were left behind. Even if you were sick or old.”

In April 2019, Nujeen Mustafa, the first woman with a disability to brief the Security Council, described the humanitarian situation in Syria: “For weeks, I heard military helicopters buzzing over our neighborhood ready to drop bombs at any moment. We went days with no sleep. My mother would carry me to the bathroom and stay there with me for hours until the bombs passed. Every day, I feared that I could be the reason my family was one or two seconds too late [to escape].”

The humanitarian response should include plans to protect people with disabilities, including for access to basic services, including shelter, sanitation, health, psychosocial (mental health) support, and education. Resources should be provided to evacuate civilians with disabilities from areas of hostilities.

“We are encouraged that many UN member states and the secretary-general have made a commitment to protect people with disabilities in armed conflicts,” Rau Barriga said. “The key is to move beyond words and make this a reality.”