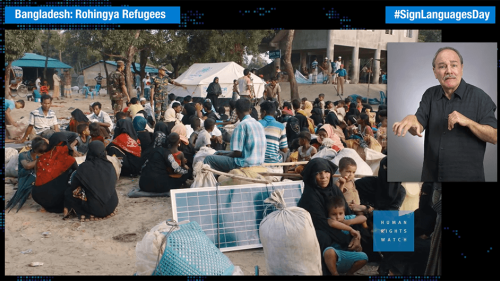 (New York) – Bangladesh’s overcrowded, hilly, and rain-soaked mega camp for ethnic Rohingya refugees is precarious for everyone, but especially for people with disabilities, Human Rights Watch said today in a new video. More than 700,000 people reside in the camp after fleeing the Myanmar military’s campaign of ethnic cleansing more than a year ago.

“Walking through the camps, we found large numbers of Rohingya refugees with disabilities,” said Bill Frelick, refugee rights director at Human Rights Watch. “Many of the people in the camp had acquired their disabilities from brutal attacks by Myanmar’s military.”

Despite efforts by the United Nations, humanitarian organizations, and the refugees themselves to build handrails, many walkways are impassable for people who have difficulty walking. Hussein Ahmad, whose 17-year-old son was shot in the neck during their escape from Myanmar and is now paralyzed from the waist down, said: “I thank the doctor who gave my son a wheelchair, but I can’t use it because the roads are very dangerous and keep getting worse. It is time for my son to study, but he can’t walk, and his life is being destroyed in front of me.”

Work to shore up the hastily and haphazardly built huts and other camp structures has been hindered by the Bangladeshi government’s insistence that the refugees are only staying temporarily and will soon return to Myanmar. The authorities have resisted developing camp infrastructure that would suggest a longer term stay. As a result, lighting, accessible toilets, and proper walkways with handrails that are critically important for people with disabilities have been slow to develop.

“With such widespread misery and obvious needs for the Rohingya refugees generally, there is a risk that refugees with disabilities will be overlooked,” Frelick said. “But this is precisely the time when the needs of people with disabilities ought to be a priority.”