Donate Now
(Geneva) – Vietnam presented a grossly inaccurate picture of its human rights record at the United Nations Human Rights Council in Geneva on January 22, 2019, Human Rights Watch said today. The government’s claim that it had implemented 175 of 182 recommendations accepted at its previous Universal Periodic Review (UPR) in 2014 bears little resemblance to reality.

Vietnam’s one-party state severely restricts fundamental civil and political rights and has stepped up its harsh crackdown on activists and dissidents. Human Rights Watch, in its July 2018 submission to the Human Rights Council in advance of Vietnam’s UPR, detailed the government’s failed promises to improve its rights record.

“Vietnam’s leaders could have used the UN session to commit to real rights reforms, but instead they plunged deeper into denial about the country’s abysmal human rights record,” said Phil Robertson, deputy Asia director. “Vietnam should recognize that when the only country that praises your ‘human rights progress’ is China, you are clearly doing many things wrong.”

At the UPR session, Deputy Foreign Affairs Minister Le Hoai Trung claimed that Vietnam ensures for everyone “the right to be treated equally before the law” and access to defense counsel. Instead, the criminal justice system is an arm of state oppression, with limited access to lawyers and unfair trials. Defense lawyers have inadequate time to prepare for politically motivated trials and to present their cases in court. Most trials for national security offenses last less than a day, and some are over in two hours.

Human Rights Watch has documented the arbitrary arrest of at least 63 activists and bloggers in 2017 and 2018, with the most recent arrest of Nguyen Van Vien, a democracy activist, occurring just nine days before the UPR session. Courts convicted at least 15 bloggers and activists on fabricated national security charges in 2017, and nearly triple that number, 42, in 2018. Many sentences imposed were for more than 10 years in prison. 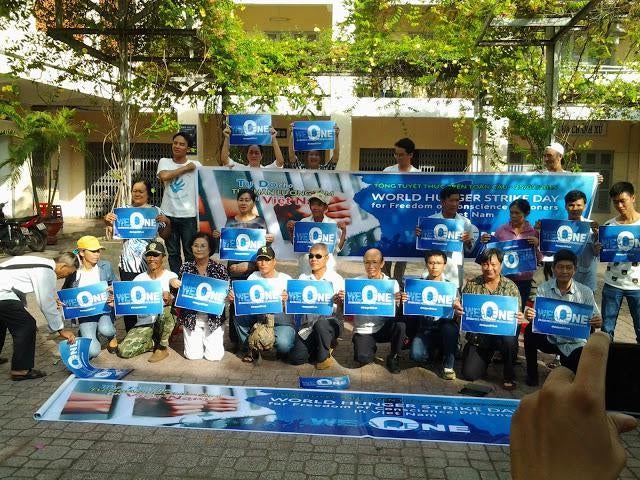 Under Vietnamese law, the authorities can indefinitely deny access to legal counsel to anyone arrested for national security offenses. For example, Le Dinh Luong, an environmental activist, was arrested in July 2017 and charged with “attempting to overthrow the people’s administration.” He was denied access to his defense lawyer until July 2018, and a month later was sentenced to 20 years in prison after an unfair trial. In another case, Nguyen Danh Dung, a blogger, has been forcibly disappeared since his arrest in December 2016, even though the provincial Communist Party and government awarded the police who arrested him 150 million dong (US$6,500), according to government-controlled media reports.

At the UPR session, Vietnam claimed it respects and facilitates the right to freedom of religion. In reality, religious freedom, and belief are severely curtailed in Vietnam. Religious groups including independent Catholic, Protestant, Cao Dai, Buddhist, and Hoa Hao Buddhists who do not have government approval are subject to surveillance, harassment, intimidation, and violent crackdowns. Members of these groups face physical assault from police or thugs believed to be connected with the authorities, arbitrary arrest, and imprisonment. The authorities call independent religious groups, such as Dega Protestant congregations among Montagnards in the central highlands, “evil way” organizations, force members to denounce their faith, and subject them to public humiliation, detention, and torture.

At the UPR, regarding media freedom, Vietnam said that it had almost 900 press agencies, 60 publishing houses, and a radio station that covers virtually the entire country. However, no mention was made that these outlets were not independent and serve as propaganda arms of the government or Communist Party.

Government claims that Vietnam “has the highest speed of internet development in the world,” with more half the population using the internet and about 58 million Facebook accounts, ignored that under the newly enacted cyber security law, ten of millions of Vietnamese internet users will have no privacy and can be arbitrarily arrested for posts the government deems threatening to national security.

Similarly, the government highlighted Vietnam’s “more than 68,000 organizations and groups” as evidence that Vietnamese citizens enjoy freedom of association, but without noting that these organizations and groups are under state or party control. The government routinely suppresses independent organizations such as Brotherhood for Democracy and the Vietnam National Self-Determination Coalition. Many leaders of these groups have been arbitrarily detained, making it difficult or impossible for them to operate.