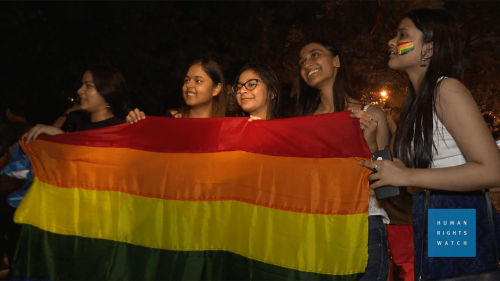 As a young reporter back in 1991, when I interviewed a senior government official on India’s response to the HIV crisis, I recall him ranting about men who have sex with men for their “perverted” and “criminal” behavior, blaming it all on Western culture. When I defended my friends, he even warned me to stay away from “those people.”

How times have changed.

Yesterday, India’s Supreme Court ruled unanimously to strike down India’s law criminalizing same-sex relations. Justice Indu Malhotra pointedly stated that “an apology [is owed] to members of the LGBT community… for the ostracization and persecution they faced because of society's ignorance.”

It is to the credit of numerous activists, lawyers, and lesbian, gay, bisexual, and transgender (LGBT) people that India has managed to overcome this ignorance in the space of a few decades.

When the Naz Foundation first filed a public interest petition in the Delhi High Court in 2001, saying its work on preventing HIV was impaired by section 377 – the penal code provision that effectively made same-sex conduct a criminal offense subject to punishment from 10 years to life. The Indian government objected, describing homosexuality as “delinquent” and “abhorrent” behavior. Yet by 2009, when the Delhi High Court for the first time decriminalized same-sex relationships between consenting adults, the government took a different view and  did not appeal the verdict.

But in 2013, the Supreme Court overturned the Delhi High Court judgment, which had been appealed by religious groups and others. However, in 2016 it agreed to review the decision and accepted fresh petitions, including from members of the LGBT community, and the final legal battle began. The Indian government did not challenge the petitions, relying, it said, on “the wisdom of the court.”

A five-judge bench of the Supreme Court has wisely ruled that the law violated the right to equality enshrined in the constitution and was being used as a “weapon of discrimination.” There is still a long battle ahead to exorcise that discrimination and prejudice, but now is the time to celebrate India. Standing in front of the court, Arif Jafar, one of the petitioners who spent 47 days in jail in 2001 after being charged under section 377, where he was beaten and humiliated, repeated Justice Malhotra’s words. “Those words really mean a lot to us,” he said. “Today’s ruling has made my 30-year journey worth it.”