(Sydney) – Papua New Guinean authorities should promptly conduct a thorough and credible investigation into the beating of a boy by police in Kimbe, West New Britain, that was captured on video and shared on social media, Human Rights Watch said today. The investigation should be capable not just of identifying the police responsible, but of prosecuting and punishing them. 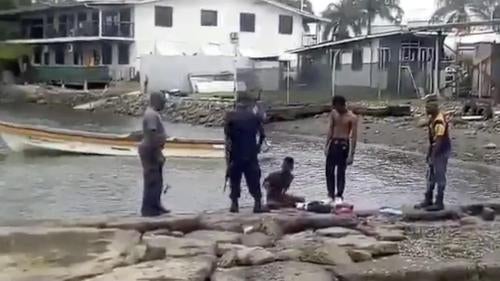 The graphic video shows two armed police officers hitting the naked boy with sticks, kicking him in the head, and dragging him along rocks on the ground. At one point, a police officer puts a gun to the boy's head. The boy cries and pleads with the officers.

Police Commissioner Gari Baki said the incident occurred a week and a half ago, and that he has ordered a "full investigation into the incident"; Baki confirmed the officers responsible will be interviewed as part of the investigation and conceded that "police brutality continues to be disregarded by a few officers."

"Announcing an investigation into this shocking incident is the first step, but authorities should ensure that it is independent and transparent, and that police found responsible are prosecuted," said Elaine Pearson, Australia director at Human Rights Watch. "This is not just a few bad apples. Police abuse in Papua New Guinea is sadly widespread, and it will only end when abusive officers are held to account for their crimes."

A spokesperson for the Papua New Guinea police reportedly said that the boy in the video was hospitalized but is now "OK" and has been released into his parents' care. Human Rights Watch has been unable to confirm the location of the boy or his condition.

The Minister for Police Jelta Wong MP responded that, "the Commissioner has been tasked to provide answers and appropriate action against the perpetrators. Like all our leaders, I have seen this video and personally was sickened by the actions taken by the 2 members of the RPNGC [Royal Papua New Guinea Constabulary]."

Papua New Guinea has a long history of police abuse, which continues with little accountability, even for fatalities and egregious physical abuse. In 2005 and 2006, Human Rights Watch documented widespread police violence, including brutal beatings, rape, and torture, against children in police custody. Beatings are so routine that police make little or no attempt to hide them, beating children in public. Police rarely provide medical care, even when victims are seriously injured.

In the past, public pressure over specific incidents of excessive use of force, has led the police to announce investigations into allegations of police violence, including the shooting of eight student protesters in 2016. But the findings of such investigations are rarely made public and officers have rarely, if ever, been convicted.

Australian Foreign Minister Julie Bishop has said she will raise the incident with Papua New Guinea's foreign affairs minister, Rimbink Pato. Bishop said that the incident indicates that, "Australia should continue to maintain a presence there, assisting, advising, [and] supporting the PNG police and PNG government."

"The Australian government should closely monitor all incidents of police violence and benchmark further assistance to law enforcement upon progress in holding the perpetrators of police abuse to account," Pearson said. "Papua New Guinea authorities need to come clean about the results of previous investigations into excessive use of force, and ensure abusive officers are not simply quietly moved or dismissed but held to account for their actions."