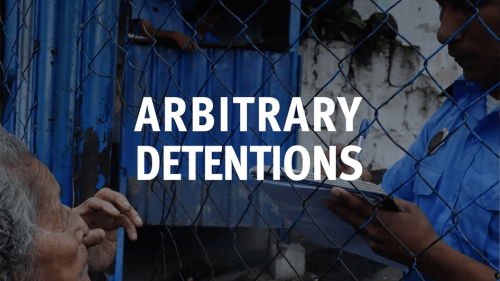 Since protests broke out on April 18, 2018, at least 270 people have been killed and over 1,500 have been injured, in most cases at the hands of police officers and pro-government armed gangs. There has been no indication that key officials have taken steps to prevent and punish violations. On the contrary, they have issued implausible blanket denials, often blaming demonstrators for violence. President Daniel Ortega has said that his government is working to ensure Nicaraguans’ “right to peace” and that the police have been “the victim of a [smear] campaign.”

“As President Ortega repeats the mantra that his government is working to ensure peace in Nicaragua, policemen under his control continue to kill protesters.” said José Miguel Vivanco, Americas director at Human Rights Watch. “Nicaraguan authorities aren’t doing what is needed to prevent more rights violations and to ensure that those responsible are held to account.”

Under international human rights law, Nicaragua's government has an obligation to take reasonable steps to prevent or punish serious human rights violations. Senior government officials, particularly those who lead institutions implicated in human rights violations, need to ensure that they live up to this responsibility. Senior officials also have an obligation to prevent and punish pervasive abuses by private actors, including armed pro-government gangs. This would be true even without clear evidence that police have worked in collaboration with these gangs.

The responsible government officials include Ortega, who under Nicaraguan law is the “supreme leader” of the country’s police, as well as Commissioner General Aminta Granera, director of the National Police, and Commissioner General Jaime Vanegas, the force’s inspector-general.

After a visit to the country in May, the Inter-American Commission on Human Rights found extensive evidence implicating the Nicaraguan police in a wide range of serious abuses, including excessive use of force, arbitrary detention, and torture. The commission concluded that the number of abuses strongly suggested “coordinated action” to repress dissent – not “merely illegal acts committed by some officials within the security forces.” The commission also found “patterns” of abuse, including excessive use of force against protesters that would indicate they were “systematic.” Human Rights Watch has documented similar abuses by the Nicaraguan police. The evidence reviewed includes testimony from victims and their families, witnesses, and lawyers defending detainees; video and photographic evidence; and information provided by local human rights groups. Human Rights Watch has also carried out a comprehensive review of statements, news releases, and footage of public appearances by senior police officials and other high-level authorities.

The commission said that police officers have used “deliberate, systematic use of lethal force” to repress massive anti-government protests. It found dozens of cases in which unarmed protesters appeared to have been killed as a result of “indiscriminate attack with lethal weapons by police officers.” The commission also found that the National Police has engaged in arbitrary arrests and physical abuse of detainees that in some cases would amount to torture.

Not only have the police failed to halt abuses by pro-government armed gangs, but there is clear evidence that the police have operated in coordination with these gangs. The gangs have abducted several people and handed some to police authorities, news media reported. Human Rights Watch interviewed a 20-year-old student who was abducted by armed men in civilian clothes, held blindfolded and tied up for eight days, and beaten, then handed over to police. Police subsequently detained him for a week, kept him naked in a dark cell, and repeatedly beat him.

The commission also documented instances of cooperation between the police and the armed gangs and called on the government to dismantle these groups. Human Rights Watch has also reviewed dozens of video clips showing heavily armed men in civilian clothes operating jointly with uniformed police officers in Managua and Masaya, including instances in which the men fired high caliber weapons at unidentified targets in the presence of police officers.

The Nicaraguan government has denied the commission’s findings. On June 22, Foreign Minister Denis Moncada said that the Nicaraguan government “rejects the complete content of the report” because it considers it to be “subjective, biased, [and] prejudiced.” Similarly, on May 27, the National Police said in a statement that it “doesn’t have and will not have [links with] parapolice forces” and claimed that it was “guaranteeing the development of peaceful protests in the country.”

High-ranking officials do not appear to have taken any serious steps to halt abuses or to ensure justice. It does not appear that any police officer has been charged by the Attorney General’s Office or meaningfully sanctioned by the police inspector-general in connection with the abuses. The commission said that it had received reports that the Attorney General’s Office had failed to initiate timely investigations, including by demanding that victims gather the evidence of abuses themselves, such as finding witnesses and identifying photographs and videos of what had happened.

Under Nicaraguan law, Ortega is the “supreme chief” of the National Police with sweeping powers, including to “command” the police at his will and dismiss police chiefs when they disobey his orders. Granera, the director of the National Police, is the head of the force. General Francisco Díaz, the deputy director, and the father-in-law of Ortega’s son, is also widely believed to exercise significant control over the force. General Vanegas, the inspector-general, is required under Nicaraguan law to investigate alleged rights violations by police officers and sanction those responsible.

In mid-May, Ortega said that he had ordered police officers not to shoot at protesters. Yet Human Rights Watch identified credible evidence – including videos, photographs, and videotaped interviews with victims – showing that police officers have in several cases discharged live ammunition at protesters and bystanders, leading to injuries and deaths.

“President Ortega tries to deflect attention by saying he has given an order not to shoot,” Vivanco said. “But the truth behind his propaganda efforts is that policemen continue to kill and abuse Nicaraguans, often in coordination with pro-government armed gangs.”