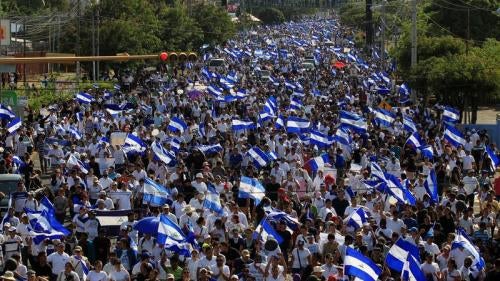 (New York) – The Nicaraguan government appears to have engaged in serious abuses against protesters and arbitrarily shut down media outlets covering the recent protests, Human Rights Watch said today. Organization of American States (OAS) member countries should urge President Daniel Ortega’s government to allow the Inter-American Commission of Human Rights (IACHR), the main rights body in the Americas, to visit the country and investigate the allegations of abuse.
Ortega announced changes in the country’s pension system on April 18, 2018, igniting demonstrations across the country that have evolved into a larger outpouring of anger against his 11-year administration. Human Rights Watch received credible accounts that suggest that police officers used excessive force to shut down demonstrations in several places across the country and that pro-government groups attacked peaceful protesters. The Nicaraguan Red Cross told Human Rights Watch that between April 18 and 25, it assisted 435 people injured during the protests, including 242 who were hospitalized. Nicaraguan newspapers and local rights groups reported that at least 26 people died, including one journalist. Authorities said that two police officers died. Other estimates from a local rights group point to up to 63 people dead since April 18.


“Protesters who engage in violence should expect to be held to account, but so too should any police officer who uses excessive force,” said José Miguel Vivanco, Americas director at Human Rights Watch. “There is no excuse for taking media outlets covering the protests off the air or allowing pro-government groups to assault journalists and protesters.”

Between April 20 and April 25, Human Rights Watch interviewed 22 people by telephone, including members of nongovernmental groups, journalists, student protesters, clergy, a member of a lawyers’ association, and a Nicaraguan Red Cross representative.

Witnesses and victims said that riot police officers fired rubber bullets and teargas at protesters who were demonstrating peacefully on the streets, as well as in front of universities and churches. They also said that pro-government groups violently dispersed peaceful protests by punching and kicking them and using blunt instruments to beat demonstrators and journalists covering the protests.

Roberto Rizo Valdivia, an engineering student, told Human Rights Watch from his hospital bed that on April 19, a riot police officer shot him in the face with a rubber bullet, causing him to lose his left eye. He said that he and his fellow students had been protesting peacefully in front of the National Engineering University (UNI) in Managua but ran into the campus when the police appeared and fired teargas at them. The police chased the students and were joined by riot police, who Valdivia said fired rubber bullets and teargas at the students inside the campus. The students responded by throwing rocks.

On April 19, four TV news channels were taken off the air, according to multiple media accounts and two station directors interviewed by Human Rights Watch. The director of one station, 100% Noticias, said that the state telecommunications regulator had told him to stop covering the protests or “face the consequences,” and that the cable company subsequently informed him that the regulator had ordered it to stop broadcasting the channel. He said that he and three other members of his staff received anonymous calls threatening to set the station’s office on fire. The three other channels were back on the air after six hours, but 100% Noticias was not able to resume broadcasting until April 24, the outlet reported.

On April 23, two news outlets – La Prensa and Confidencial – alleged they had experienced a “cyber-attack.” La Prensa’s website slowed down, the newspaper’s IT manager said in an article it published. Confidencial’s website was offline from 8 a.m. to 3 p.m., Carlos Fernando Chamorro, chief press officer, said in a broadcast that night, calling it an attack by “the enemies of the free press.” Both outlets said that they believe the attack was an attempt to silence their coverage of protests.

Four journalists told Human Rights Watch that pro-government groups assaulted them while they were reporting on the protests, while local newspapers reported seven more cases. An Associated Press photographer, Alfredo Zúñiga, said that on April 18, a mob of men wearing identical T-shirts with pro-government slogans assaulted him and stole his camera as he covered a protest in Managua.

One man used a motorcycle helmet to bash Zúñiga in the face, he said, while another man hit him on the head with a steel pipe. He told Human Rights Watch the blow caused a wound that required eight stitches. When the attackers left, Zúñiga approached two police officers that had witnessed the attack from a few meters away. “One of them shrugged and the other one told me, ‘You shouldn’t have been here,’” Zúñiga said.

Human Rights Watch also received credible allegations that in some cases detained protesters were abused. Anielka Hernández, 25, told Human Rights Watch that police detained her at about 2 p.m. on April 20 as protesters began dispersing after a demonstration in the Managua suburb of Ticuantepe. Hernández said that she was put in the back of the police truck, and that a female police officer knelt on her chest. She protested she could not breathe and in response, she said, the officer put her knee on Hernández’s throat and slapped her face.

Hernández said she was taken to a police station, where three female officers forced her to strip naked and squat five times in front of them, while threatening to beat her. She was then allowed to dress, held for five hours, and then released.

On April 23, United Nations Secretary General António Guterres called on the Nicaraguan government to protect “the right to peaceful assembly and freedom of expression.” The next day, a spokesperson for the UN high commissioner for human rights expressed concern that several of the deaths recorded “may amount to unlawful killings” and called for an end to “the attacks on journalists and media organizations.”

In a joint statement published on April 22, the governments of Argentina, Brazil, Colombia, Chile, Paraguay, and Peru – all OAS members – called on Nicaraguan security forces to “avoid the excessive use of force” and expressed their “solidarity” with the victims.

On April 24, IACHR “condemn(ed)” protest-related deaths, raised concerns about attacks on media, and said that it would request Nicaragua’s consent to carry out a working visit to the country.

“Leaders in the region did the right thing by expressing their solidarity with the victims in Nicaragua, but they can and should do much more,” Vivanco said. “OAS member states should promptly convene a meeting in the Permanent Council to press President Ortega to allow the IACHR to visit the country with the government’s full cooperation.”