Donate Now
(Tallahassee, Florida) – Both houses of the Florida legislature should pass a bill to set the minimum age of marriage at 18, with no exceptions, the Florida Coalition to End Child Marriage said today. The coalition, which consists of 13 organizations, as well as survivors of child and forced marriage, called on legislators in the Florida House of Representatives to remove a harmful amendment from a pending law to ban child marriage.

On January 31, 2018, the Florida Senate unanimously passed SB 140, which sets the age of marriage at 18 with no exceptions. On February 1, an identical bill, HB 335, was reviewed in the House Judiciary Committee. This committee amended the bill to permit the marriage of a pregnant 16- or 17-year-old, with parental consent and limiting the age difference of the spouses to two years. The members of the Florida Coalition to End Child Marriage are calling on all House members to instead pass the original version of the bill, setting the age of marriage at 18 without exceptions.

“I don’t want a single other child in Florida to go through what I did,” said Sherry Johnson, a member of the coalition who has been campaigning for several years to change the law. Johnson was forced to marry at age 11, in Pinellas County, under the current law, to a man who had raped her repeatedly and fathered her child when she was 10 years old. “I believe this is the year that we will end child marriage in Florida. The Senate has already passed a bill that would protect all children, and I am asking the House to do the same.”

A 16- or 17-year-old is still a child, without the rights of an adult and an adult’s ability to withstand pressure to marry against their will. Pregnancy does not change that. In addition, limiting the age gap between a married child and her spouse does nothing to prevent most of the harm associated with child marriage.

A growing body of research demonstrates that child marriage is associated with, and in some cases causes, severe harm to married children, wherever they live. A 2010 study found that girls or young women in the United States who married before the age of 19 were 50 percent more likely to drop out of high school than their unmarried counterparts, and only 25 percent as likely to complete college.

Girls who marry as early teens – before age 16 – in the US are 31 percent more likely to end up in poverty later in life. Girls who marry while pregnant are more likely to have a second child soon after, compared with girls who become parents but do not marry. A closely spaced second birth is associated with lower economic and educational attainment.

From 2000 to 2015, more than 16,400 children below age 18 married in Florida. 80 percent of these children were underage girls who married adult men. Child marriages are often forced or coerced by parents. Florida law currently permits children to marry at age 16 or 17 with permission from their parents, and allows a child of any age to marry in the event of pregnancy if a judge authorizes the marriage. 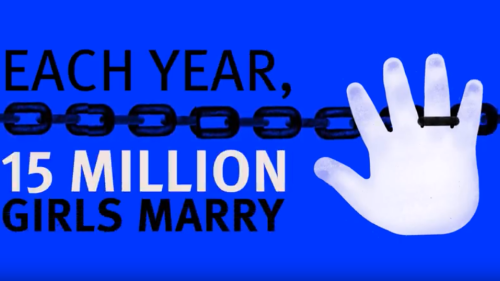 Globally, one out of every four girls marries before age 18, and 15 million girls marry before age 18 each year. The rate of child marriage is dropping, but population increases mean the numbers are increasing. Child marriage occurs in every region of the world. The overwhelming majority of married children are girls, most of whom marry older men, sometimes much older.

Researchers have found significant associations between child marriage and mental and physical health disorders. One study found that marrying as a teenager in the US was associated with a 23 percent higher risk of disease onset – including both physical and mental health conditions – for women. Research from other countries shows a correlation between child marriage and domestic violence. Married girls often find it more difficult than married women to escape an abusive or unhappy marriage and to access services such as shelter and legal assistance.

New York, Texas, and Virginia have all passed laws in recent years aimed at reducing child marriage. Germany, the Netherlands, and Sweden are among numerous other countries taking similar steps. Florida has been a leader in protecting the rights of children; if the Senate bill becomes law, it would make Florida the first state to completely ban child marriage.

“I am so grateful to every member of the Florida legislature who has taken the time to hear my story and care about this issue,” Johnson said. “I want to thank every senator who voted for the bill, and all the members of the House who have voted for it in committee. We are so close to getting this done, and I just want to ask, from the bottom of my heart, for legislators to go the whole way and end all child marriage in Florida.”