(Kabul) – Afghan government and international donor efforts since 2001 to educate girls have significantly faltered in recent years, Human Rights Watch said in a new report released today. Sixteen years after the US-led military intervention in Afghanistan ousted the Taliban, an estimated two-thirds of Afghan girls do not attend school.

“The Afghan government and donors made bold promises in 2001 to get all girls into education, but insecurity, poverty, and displacement are now driving many girls out of school,” said Liesl Gerntholtz, women’s rights director at Human Rights Watch. “The government needs a renewed focus to ensure all girls have a school to attend or risk these gains being lost.” 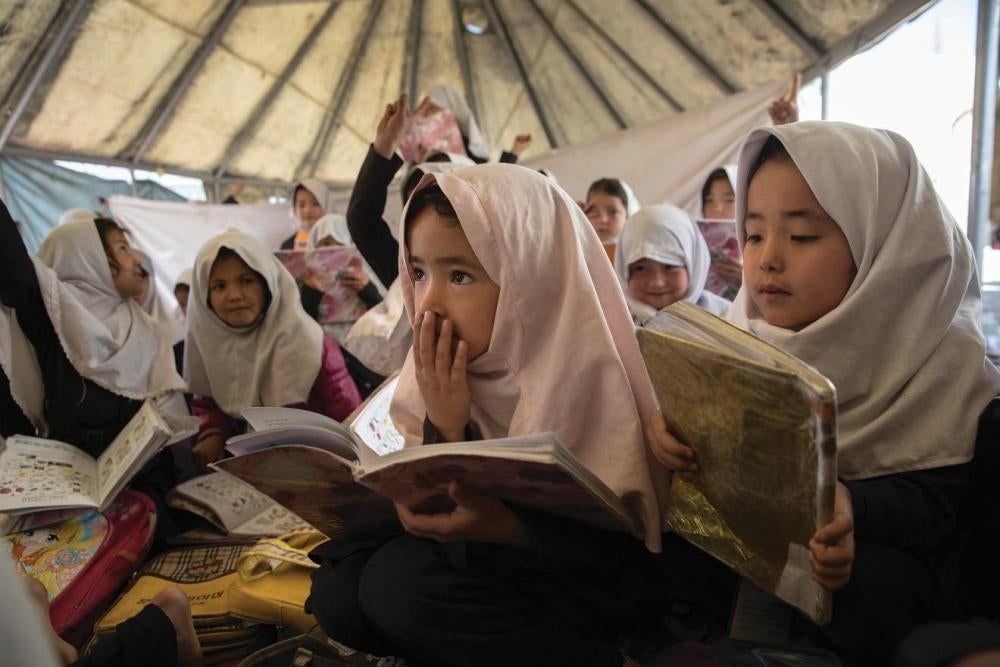 Families are fighting desperately to educate their daughters in the face of enormous obstacles. &#13;

The 132-page report, “I Won’t Be a Doctor, and One Day You’ll Be Sick: Girls’ Access to Education in Afghanistan,” describes how, as security in the country worsens and international donors disengage from Afghanistan, progress made toward getting girls into school has stalled. It is based on 249 interviews in Kabul, Kandahar, Balkh, and Nangarhar provinces, mostly with girls ages 11 to 18 who were not able to complete their education.

Girls’ education has often been highlighted as a success story by donors and the Afghan government, and millions more girls are in school today than were in school under Taliban rule. But the stated aim of getting all girls into school is far from realized, and the proportion of students who are girls is now falling in parts of the country. According to the government, 3.5 million children are out of school, and 85 percent of them are girls. Only 37 percent of adolescent girls are literate, compared to 66 percent of adolescent boys.

Afghanistan’s government provides fewer schools for girls than boys at both the primary and secondary levels. In half the country’s provinces, fewer than 20 percent of teachers are female – a major barrier for the many girls whose families will not accept their being taught by a man, especially as they become adolescents. Many children live too far from a school to attend, which particularly affects girls. About 41 percent of schools have no buildings, and many lack boundary walls, water, and toilets – disproportionately affecting girls.

Khatera, 15, raised in rural Samangan province, told Human Rights Watch, “It was very far to the nearest girls’ school – it was in another village…. On a donkey or horse, it would take from morning until noon.”

Girls are often kept home due to discriminatory attitudes that do not value or permit their education. A third of girls marry before 18, and once engaged or married, many girls are compelled to drop out of school.

But many families are also fighting desperately to educate their daughters in the face of enormous obstacles, and deserve support. Human Rights Watch spoke to families who moved across cities and even across the country to find a school for their daughters, who separated to allow girls to study, and who had older brothers make the dangerous trip to work illegally in Iran to pay school costs for their younger sisters back home.

Afghan law states that education is compulsory through class nine, when children normally would be about 14 years old, though in reality many children have no access to education to this level – or sometimes, to any level. Administrative barriers and corruption create additional obstacles, especially for displaced and poor families. Even when tuition is free, there are costs for sending children to school and many families simply cannot afford to send any of their children or choose under financial constraints to favor educating sons. About a quarter of Afghan children work to help their families survive desperate poverty, and many girls weave, embroider, beg, or pick garbage rather than study.

The Taliban and other insurgents now control or contest more than 40 percent of Afghanistan’s districts. Fighting between Taliban and government forces has driven thousands of families from their homes, and more than a million Afghans are internally displaced. In areas under Taliban control, the Taliban often limits girls to only a few years of schooling, or bans them from education altogether. In contested areas, girls seeking to attend school face heightened security threats. The conflict has been accompanied by lawlessness, as militias and criminal gangs have proliferated, and girls face threats including sexual harassment, kidnapping, and acid attacks, as well as targeted attacks and threats against girls’ education. In this environment, education is increasingly affected, and girls are disproportionately harmed.

Donors have worked with the Afghan government to develop innovative models that allow girls to study even amidst escalating conflict, Human Rights Watch said. “Community-based education” is a network of classes, often held in homes, that allow children, particularly girls, to access education in communities far from a government school. But because these specialized classes are funded solely by donors and implemented by nongovernmental organizations, they have no consistent connection with the government school system and come and go due to the unreliable cycles of funding to nongovernmental organizations.

“Integrating these community-based schools in the government education system, with sustainable funding and quality controls, would be a lifeline for many girls,” Gerntholtz said.

According to international standards established by UNESCO, the government should spend at least 15 to 20 percent of total national budget, and 4 to 6 percent of GDP, on education. The United Nations urges that least developed countries, of which Afghanistan is one, should reach or exceed the upper end of these benchmarks. As of 2016, 13 percent of Afghanistan’s public expenditure, and 4 percent of GDP, was spent on education.

The Afghan government, with its international donors, should increase girls’ access to education by better protecting schools and students; institutionalizing and expanding education models that help girls study; and taking concrete steps to meet the government’s international obligation to provide universal free and compulsory primary education and help make secondary education free and available to all. They should also encourage and intensify “fundamental education” for those persons who have not received or completed the whole period of primary (or basic) education.

“Even amidst the great difficulties Afghanistan faces, the government can and should be working to ensure that girls and boys have equal access to education and to integrate girls’ community-based education into the national school system,” Gerntholtz said. “Donors should commit to long-term support for girls’ education and need to ask more hard questions about how their funds are being spent.”

“By the time we walked to school, the school day would end.” – Najiba, 15, explaining why she and her eight siblings did not go to school in Daikundi, Mazar-i Sharif, July 2016

“The Taliban is near our house. If we go to school, they will kill us. If the government can provide security, we will be very interested to go to school.” – Paimanah, 12, who studied at a community-based education center hidden in a family home near her house, Kandahar, July 2016

“The road to the government school has many thieves and bad boys.” – Hakim, 13, class 3 student at Community Based Education, Kandahar, July 2016

“The most important thing is to convince fathers to let their daughters go to school.” – Manija, 17, class-three student at a community-based education program, Kandahar, July 2016

“Men would disturb and threaten small girls. The men would touch us and do other actions with us, so we left. They were local men living nearby. No one tried to stop them – it happened to a lot of us. Lots of girls left school because of this – more than a hundred left. Kandahar people won’t allow their girls to go to school.” – Chehrah, 16, lived only 100 meters from a school in Kandahar. The harassment led to her asking her father if she could go to another nearby school in an area she believes is safer, but instead he removed her from school permanently, at age 12.

“It happened on the road right in front of the school.... Some students lost their eyes – their faces were burned…All the family decided no girls in our family will go to school…But for years I fought them and continued.” – Maliha, 17, was in class five at a government school when her classmates were the target of an acid attack. Fifteen students were injured, four seriously.

“We have 395 schools without buildings. This is a big challenge for female students because these schools don’t have a perimeter wall – they are open. In these areas, in most districts, people won’t send girls without a building and a perimeter wall.” – Provincial education official, Jalalabad, July 2016

“In many areas there are no female teachers.” – Provincial director of education, July 2016

“We sell fruit for 20 to 30 Afghanis [US 29-43 cents]. The kids here run around the market and eat peels from the ground. We are destitute. All the kids are illiterate…Should they take care of food, or education? … If your stomach is empty, you can’t go to school.” – A community leader from an informal settlement in Kabul of Kuchi people, who were formerly nomadic, explained why in his community few children go to school. He has five or six grandchildren living in the settlement, none of whom go to school.

“I don’t have money for a pencil for my son, let alone my daughter.” – A community-based education program staff member recounting a common response of fathers for why their daughters do not go to school

In response to the evolving situation in Afghanistan, Human Rights Watch has decided to edit visual elements of this publication temporarily for security reasons.