Losing the War
for Girls’
Education in
Afghanistan

I was living in New York City on 9/11. I watched from my rooftop as the second tower fell, joined colleagues handing out water to survivors covered in dust and sometimes in blood, and went to a protest in Union Square calling for peace. We knew war was coming—that the US government would respond with force—we just didn’t know yet where the bombs would fall.

As it became clear that Afghanistan was in the crosshairs, we heard a lot about Afghan girls. Under Taliban rule they weren’t allowed to study-or even go outside by themselves. Older girls and women were forced to wear the billowing blue burkas that featured in photos accompanying virtually every article.

The war happened, the Taliban fell, and Afghans started rebuilding, as they had so many times before. There was donor money for girls’ education, and many good intentions, and there was progress.

I moved to Kabul in 2007. Every afternoon hundreds of girls, in black uniforms and white headscarves, poured out into the street near my house. It was impossible to see them-giggling and roughhousing, buying bolani, stuffed flatbread, from the street vendor who set up every day-and not feel that they were the future of Afghanistan, and that foreign intervention, if it had given them that chance, had to be worth something.

Girls receive lessons in a tent at a government school in Kabul, Afghanistan. Even according to the most optimistic statistics, only slightly more than half of Afghan girls are in school; by the time they reach 15, only a third remain.

Girls sit for lessons on a stairwell inside a school building. Overcrowding—compounded by the demand for gender segregation—means that schools typically divide their days into two or three shifts, resulting in a school day too short to cover the full curriculum.

Girls study in a tent held up by a tree in a government school in Kabul, Afghanistan. Forty-one percent of all schools in Afghanistan do not have buildings and even when they do, they are often overcrowded, with some children forced to study outside.

But things changed. The conflict escalated in ways that reached even the bubble that expats largely lived inside. I left in 2013, feeling cynical and hopeless.

Two and a half years later, I returned to talk to girls about education. Now I was the mother of a daughter—and that seemed to have stripped away the armor that had let me feel safely removed from the Afghan girls’ terrible stories. When I interviewed them, sometimes I saw my daughter. Sometimes I imagined how it felt to be their mother, ready to sacrifice anything for them, and still unable to keep them safe or ensure their future.

Rebuilding girls’ education is a project that is half finished at best, and crumbling. The Afghan government–and the international donors that provide most of the national budget–have never spent all that’s needed to ensure that all Afghan children get an education. Only about half of Afghanistan’s girls ever go to school and by age 12 to 15, two-thirds are out of school. Worse yet, in some parts of the country the number of girls studying is now falling. There is a real possibility that worsening security and donor disengagement will deal a double punch and that reversals will escalate.

A member of Afghanistan’s security forces patrols on a hill overlooking Kabul. In recent years, security has steadily worsened across the country, including in the capital, which has repeatedly endured attacks targeting civilians. Many families struggling to educate their children face dangers such as gun battles, targeted attacks against girls' education, bombings, kidnapping, harassment, and common crime.

Plastic bags are spread out to dry near a house in Kabul. Families who are extremely poor sometimes burn plastic as fuel for cooking and heating. Although government schools do not charge tuition, families of students at government schools are expected to provide supplies, which can include pens, pencils, notebooks, uniforms, and school bags. These indirect costs are enough to keep many children from poor families out of school.

A girl, 14, in the workshop where she is employed as a seamstress. She arranges her work hours around attending a government school, where she is in class seven.

A 10-year-old girl sorts through rubbish to salvage plastic containers that she can sell. She leaves home at 6 a.m. and returns at 5 p.m. She does not go to school and works to help support her large family that includes nine brothers and four sisters. None of her siblings attend school.

Two sisters, ages 9 and 5, work on the streets of Kabul selling chewing gum, earning about US$2 per day. At least a quarter of Afghan children between ages 5 and 14 work for a living or to help their families.

Children play along the dirt roads at an informal settlement for internally displaced people (IDPs) in Kabul. IDPs and returning refugees often struggle to get their children into school as they try to settle into a new location, often having endured trauma and loss of possessions and livelihood through flight or deportation.

We met girls who used to go to school but couldn’t anymore because of insecurity, and girls who never went to school because there was no school where they lived. We talked to girls whose families didn’t believe that girls should study, and parents desperate for girls to study but too afraid of the war going on outside their front door to let them out. We heard about schools destroyed in the fighting, schools closed as a precaution, schools taken over by the Afghan military or the Taliban or ISIS, and ghost schools that lined someone’s pocket but never taught children. We met girls who married too young, and girls who worked from dawn to dusk to help feed their families.

We heard about girls who walked four hours each way to class. We met girls whose whole families moved across town or across the country to find them a school, and girls whose parents sent them far away to live with relatives so they could study. Several girls had uneducated older brothers who made the dangerous and lonely trip to work illegally in Iran to send money for their younger sisters to study. Whole families conspired to sneak some girls to school every day against the prohibition of fathers, grandfathers and uncles.

A sixth-grade student takes the viewer on a tour of the school she attends in Kabul, Afghanistan.

“We are still burning in the flames of war, which prevents both boys and girls from going to school,” an official from the human rights commission told me.

This is painfully true, but so many girls we met fought so hard to study. Zarifa, 17, went to a class of 30 to 35 girls in her Kabul neighborhood set up by an international organization, then transferred to a government school. She said many of her classmates drifted away. “Very few stayed,” Zarifa said. “Some married, some families didn’t allow them to continue, some had security problems.”

The environment at the government school was also difficult. “There are too many students-it’s hard to manage them,” Zarifa said. “There is a lack of chairs, of teachers, of classrooms. It’s too crowded-some study in tents. There is a lack of books. At one time, I had no books.” Six years later, 8 to 10 of the original 35 were still studying. “I didn’t allow myself to be taken out,” Zarifa said. “I had promised to stay and finish.”

At this Kabul government school, the tents in the vacant lot are a girls' school where over 600 girls study. The buildings in the lot beyond the tents were paid for by international donors; they house a boys' school. Some girls are permitted to study in the buildings during the third shift of classes, after the boys have finished their studies for the day.

Two classes take place back-to-back with only a cloth partition separating them. Even if girls can attend school, whether they stay often depends on the quality of the education.

Boys study in the library of their government school in Kabul, Afghanistan. Girls are not allowed to use the boys’ library at this school—instead they have a separate and much smaller library, with no table and chairs, few books, and it is not open for general study and reading but instead remains locked.

Girls at a government school in Kabul study outside in a drainage area to avoid the sun. Many girls study in tents, but others lack even that protection. They struggle with frequent class cancellations and difficult conditions due to Afghanistan's harsh climate of heat, cold, wind, dust, snow, and rain.

Students at a community-based education program in Kabul, Afghanistan. These programs are often an Afghan girl’s only chance at education and provide a temporary solution to some of the systemic barriers to girls’ education, including long distances and insecurity on the way to school, and the lack of female teachers. 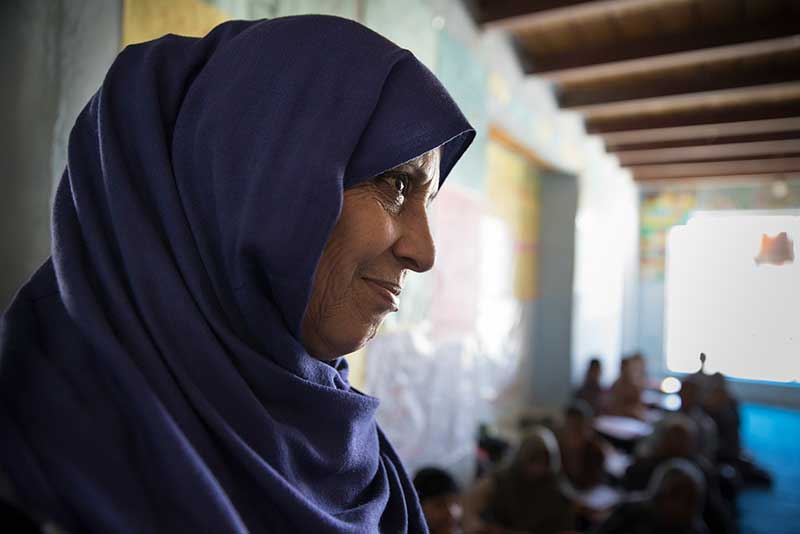 The director of a community-based education program observes students. These programs—often referred to as “classes” rather than schools, as they are often based in homes—frequently consist of a single class of 25 or 30 students. They are designed to provide access to education in communities where there is no nearby school. 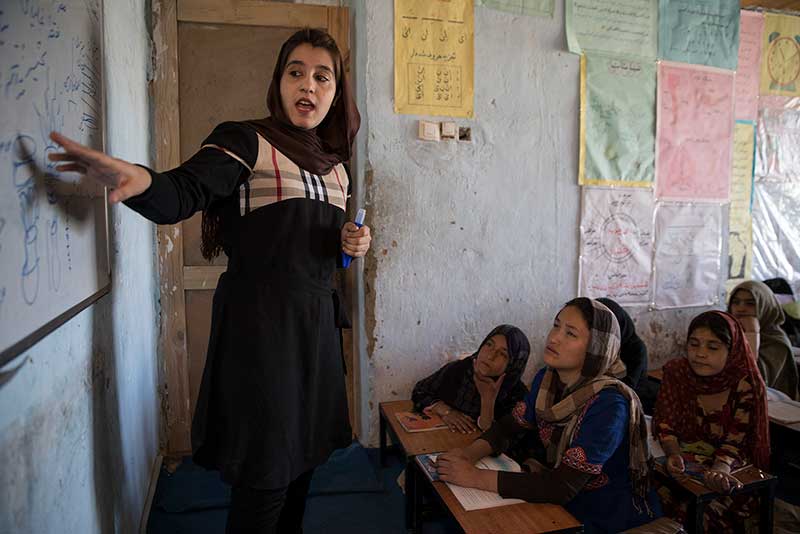 Sixteen years after the US-led invasion, the war continues. Civilian casualties are higher than ever. There is talk of an expanded US military presence and the creation of a new Afghan militia. But there is little talk about books and pencils. We are in grave danger of breaking our pledge to Afghan girls.

“I went [to school] for 10 days but then there was no one to collect cartons [for money to support my family] so I stopped.... I wish I had gone. School was good, if I had continued, I would be better off.