Anacelis Alfaro’s troubles started late last year in the main plaza of Barquisimeto, the quiet capital of Venezuela’s Lara state, on the banks of the Turbio River. Alfaro, 51, was an event organizer for a private university there — and an activist for an opposition political party, Popular Will, in charge of organizing working-class neighborhoods throughout Lara. On a sunny day last December, the party was celebrating its anniversary fiesta in the town square. Alfaro’s keynote speech celebrated the role of women in politics, mentioned the arbitrary jailing of opposition party leader Leopoldo López, and urged hope in grim times. She basked in the December sunshine, catching up with activists from various states, and went home without a clue that life as she knew it was over.

The next day, a criminal judge issued a warrant to search the homes of two party activists for “posters and signs” and “other evidence of criminal interest.” Alfaro, unaware that her apartment was on the list, was visiting friends for the weekend in neighboring Carabobo state. So when the police arrived in the small unit, only her 79-year-old mother, who lived with her, was there to see them ransack the place and to answer questions about Alfaro’s whereabouts.

The warrant did not specify a crime, but a friend with links to the government warned Alfaro to stay away from home. Officers who had interrogated the other activist for two days asked repeatedly where Alfaro was. So she spent a week hiding with friends before taking their advice to flee the country. A friend fetched her passport, and Alfaro flew to Buenos Aires, where, after months of getting her papers in order and seeking work, she found a job making sandwiches in a fast-food restaurant in Argentina’s capital — exiled for the crime of dissenting. “I felt like a coward,” Alfaro said when I met her in the cafe. But, she added, “In jail, I am useless.” 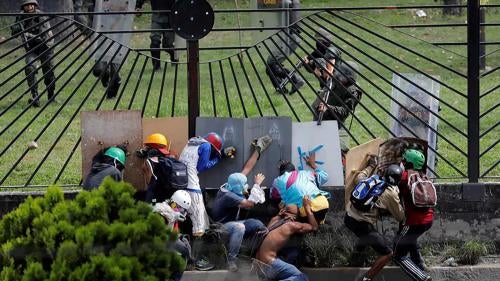 As Venezuela transforms into a police state, hundreds of thousands are fleeing hardship and persecution. Historically, this country welcomed immigrants, including many who escaped the Latin American dictatorships of the 1960s and 1970s. (Arrivals from Argentina, Chile and Uruguay increased by 800 percent during that period — a wave that included my parents, who fled Buenos Aires days before the 1976 military coup.) But now the pipeline moves in the opposite direction, and countries around the region are scrambling to return the favor.

I’ve interviewed dozens of people from the new Venezuelan diaspora in recent months, including professionals, students and members of indigenous communities who left the country by plane, like Alfaro, or on days-long bus rides, or even on foot. They fled in search of food, medical treatment or shelter from persecution. Argentina has more than doubled the number of temporary resident permits issued to Venezuelans every year since 2014, reaching 35,600 in May 2017, according to Argentine immigration authorities. Chile has more than quadrupled its visas to Venezuelans in recent years, from 1,463 in 2013 to 8,381 in 2015. Peru has received more than 10,000 Venezuelan requests to stay so far in 2017, immigration authorities told Human Rights Watch.

Venezuelans were sixth on the 2014 list of countries whose nationals requested legal residency permits in Uruguay, but they jumped to the first place this year, authorities told Human Rights Watch. Brazil has a backlog of thousands of Venezuelan asylum applications, and Venezuela last year sent more asylum seekers to the United States than any other country (some 18,000, according to reports).

Each of my interviewees gave new meaning to the depth of the political and economic collapse.

Hunger forced Pablo López, a 23-year-old member of the Venezuelan Warao indigenous community, to cross to Brazil. When I interviewed him in February, he was sleeping on the street in a Brazilian border city with 100 of his fellow Warao. Men, women and children lived, cooked and ate in extremely unhygienic conditions there. López earned $1.40 an hour loading trucks. Other members of his community sold handicrafts or begged on the streets. Everyone I spoke with told me they were better off in Brazil than in Venezuela.

Cancer forced out Ludiskel Mass, a 32-year-old schoolteacher and student activist with the opposition party, A New Time. Doctors in her hometown of Maracaibo told her in 2015 that vaginal bleeding was probably caused by a cyst, but they lacked the medical supplies to provide a proper diagnosis. Two friends paid for her bus ticket to Lima, where she arrived after a six-day road trip, she told me. In Peru, doctors diagnosed her and operated successfully to remove a uterine cancer. A year later, she moved with her 11- and 12-year old children to Lima.

Alfaro is sure she would be in prison if she hadn’t run. Many activists — the powerful and well-known, as well as the low-profile — have been harassed, detained or threatened with arrest since she fled. Venezuelan Penal Forum, a nonprofit group, counts about 400 political prisoners, and says that, since April, military courts have prosecuted more than 460 civilians, over whom such courts are supposed to have no jurisdiction.

On July 16, more than 7 million Venezuelans participated in an unofficial plebiscite organized by the opposition with the support of civil society groups, universities and hundreds of volunteers. With their participation, they expressed their opposition to President Nicolás Maduro’s proposal for a Constituent Assembly made up of government supporters. About 10 percent did so from abroad. (Two weeks later, Maduro went ahead with his plan anyway, erecting a Constituent Assembly with frighteningly wide and vaguely defined powers for an indeterminate amount of time.)

Whether they were fleeing privation or imprisonment, all the people I interviewed thought they’d had no choice but to leave. In Venezuela today, there are no independent institutions left to check executive power. The supreme court, which became an appendix of the Miraflores Palace after former president Hugo Chávez stacked it in 2004, has repeatedly upheld measures that erode Venezuela’s democracy and violate fundamental rights. Recently, the court stripped the National Assembly of legislative powers — and instead of insisting on Maduro’s adherence to the constitution, the court supported his call to rewrite it. It also rejected every legal challenge brought by Attorney General Luisa Ortega Díaz, a former government loyalist who has begun to speak out against the government. The National Electoral Council, likewise, failed to carry out regional elections that the constitution mandated for 2016 and delayed a referendum to recall Maduro — until the courts shut down the recall effort entirely.

The Maduro administration has taken advantage of its monopoly on power to arrest and prosecute critics, to disqualify opponents from running for office — and jail them for good measure — to detain or expel journalists, and to take TV channels off the air. Venezuelan security forces, together with armed pro-government groups, have brutally repressed massive anti-government protests, killing dozens, injuring hundreds and detaining thousands.

Hernán González, 40, told me recently in Uruguay that he fled Venezuela after the National Guard killed his brother, Pablo. For years, he and his family had been hardcore chavistas, but they had soured on the regime because of food lines and malnutrition; they voted for the opposition in the 2015 legislative elections. One evening in November 2016, witnesses told González (which is not his real name), that Pablo was playing dominoes with friends on the sidewalk near his home when guardsmen detained him. Later that evening, Pablo’s body turned up at a hospital; members of the National Guard told González his brother had died in a “confrontation.” The body was covered in bruises had a bullet hole in the chest.

The government has also denied a humanitarian crisis resulting from a mishandling of the country’s economy, and has refused to seek readily available international aid. So severe shortages of medicine, medical supplies and food drive out more and more people like López and Mass, who cannot feed their families or get the most basic health care. And the cycle of government repression and denial continues. Days after the health minister reported 2016 figures showing skyrocketing maternal mortality, infant mortality and malaria cases, she was fired.

The South American nations giving refuge to Venezuelans have opened a pressure valve — albeit a small one — on the crisis. But exile is no permanent solution. The problem is the Maduro administration’s abusive policies and practices. Since thousands of Venezuelans took to the streets in early April to protest its growing authoritarianism, the government has responded with a brutal crackdown. Security forces have shot demonstrators at point-blank range with riot-control munitions, run over demonstrators with an armored vehicle, beaten people who offered no resistance and broken into homes of suspected opponents. The security forces have also arbitrarily arrested hundreds of demonstrators, bystanders and critics.

The region’s leaders need to redouble pressure on Maduro to set a date for free and fair elections with rigorous international oversight. They need to keep pressing him to end the repression, release all political prisoners, prosecute human rights crimes, restore judicial independence, reinstate the powers of the National Assembly and allow an ample flow of international aid. They need to impose sanctions against key officials and signal that human rights violators will eventually be brought to justice — once judicial independence is restored in Venezuela.

The people in prison for dissenting, the people going home empty-handed from bread lines and the people ailing with preventable diseases deserve as much. So do the exiles who are longing to return to their country.

Alfaro is getting used to Buenos Aires. She likes strolling the city, which she couldn’t do in her crime-ridden country. She has friends among the migrant Venezuelans, and although she was grateful to learn restaurant work late in life, she is happier now that she found a job using her Caribbean charm to sell jewelry in Buenos Aires. She collaborates with Venezuelan opposition members who travel to Argentina, and she ran one of the centers in Buenos Aires for the opposition’s July 16 plebiscite, so she knows she is contributing to restoring democracy in Venezuela. But at the deepest level, she feels homesick and disenfranchised. “I will eventually go back to my country to help rebuild it,” Alfaro said as we gathered our things to leave the cafe.