(Brussels) – The European Parliament should ensure that European Union funds for refugees also reach those with disabilities, Human Rights Watch and the European Disability Forum said in advance of an event at the European Parliament in Brussels tomorrow, March 28. Thousands of asylum seekers have been trapped for over a year in horrifying conditions in Greece, since the adoption of the EU-Turkey deal, and the organizations are deeply concerned that refugees with disabilities are being overlooked in the humanitarian response.

“Refugees with disabilities are at heightened risk of violence, including sexual and domestic abuse, discrimination and exclusion from access to humanitarian assistance, education, livelihoods and health care,” said Gunta Anca, vice-president of the European Disability Forum and panelist at the European Parliament event. “The European Union has the legal obligation to ensure that persons with disabilities are included in its humanitarian response.” 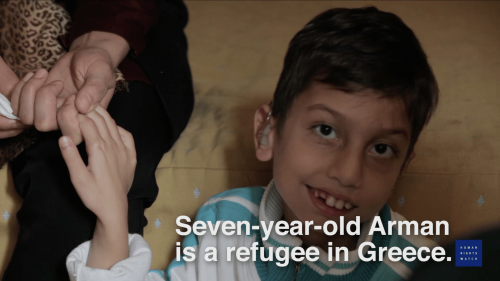 Participants will discuss the specific problems that refugees, asylum seekers, and other migrants with disabilities face in Europe and steps the EU should take to address the problems. Nujeen Mustafa, who uses a wheelchair and who sought refuge from the war in Syria in Germany in 2015, will highlight that behind the statistics on migration are human beings fleeing deadly violence, some in the most challenging circumstances. They deserve dignified reception conditions, whether or not they have a disability.

In January, Human Rights Watch published its findings that people with disabilities were not being properly identified in the refugee reception system in Greece. The European Disability Forum’s mission to Greece in October 2016 had similar findings. Both documented that people with disabilities had difficulties getting access to basic services such as shelter, sanitation, and medical care, and like others, had limited access to mental health care.

In October, in the Elliniko camp in Athens, Human Rights Watch met 8-year-old Ali, from Afghanistan, who uses a wheelchair and could not use the camp’s toilets, which had narrow stalls and no ramps. As result, he had to start wearing diapers. After his conditions deteriorated for lack of adequate health care and physical rehabilitation, the United Nations refugee agency, UNHCR, finally moved his family from the squalid conditions in the camp to an apartment in Athens, UNHCR told Human Rights Watch in January 2017. But the needs of many other people with disabilities in Greece have not been met.

One problem is poor management of humanitarian funds by the Greek government, UNHCR, and other humanitarian aid agencies. Another problem is the lack of control and monitoring by the EU, and particularly the European Commission, to ensure that these funds benefit people with disabilities and other at-risk groups.

“Addressing the rights and needs of people with disabilities and other at-risk people, such as unaccompanied minors, older people and pregnant women, should be at the core of the EU’s response to refugees,” Ćerimović said. “There needs to be sufficient accountability of the European Union’s abundant funds for refugees and asylum seekers so that we know where this money is going.”

The United Nations Convention on the Rights of Persons with Disabilities, ratified by the European Union in 2010, requires European authorities to ensure the protection and safety of people with disabilities in situations of armed conflict, humanitarian emergencies, and natural disasters.

The humanitarian response in Greece is the most expensive in history when measured by the cost per beneficiary, according to humanitarian aid specialists. The Greek government, with the support of the EU and its member states, should remove all obstacles in its asylum system preventing refugees from receiving the assistance they need.

The European Parliament should use its oversight role to ensure that the EU’s response is not discriminatory and that there is improved accountability for the use of EU funds for refugees, asylum seekers and migrants in Europe.

The member states of the EU should also accelerate relocation of asylum seekers, including those with disabilities, from Greece to other EU countries.

“As the umbrella organization representing over 80 million people with disabilities in Europe, we will keep on reminding the European Union of its obligations to protect and promote the rights of persons with disabilities, until every refugee and migrant with a disability in Europe is received in dignified conditions,” Anca said.