Is the ongoing battle between Iraqi forces and the Islamic State (ISIS) to retake both Mosul and Raqqa not just going to put the nail in ISIS’s coffin but remove the causes of Sunni Arab discontent? Not if the Kurdish forces continue to displace thousands of Arabs and demolish their homes.

A new Human Rights Watch report documents a pattern of unlawful destruction of Arab homes and sometimes entire Arab villages between September 2014 and May 2016 in areas of Kirkuk and Nineveh governorates after they came under the control of Kurdish Peshmerga forces and when there was no imperative military necessity that would warrant the destruction. 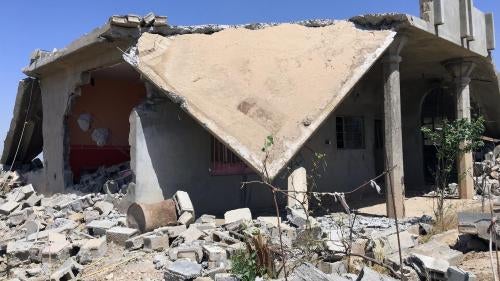 Kurdish Regional Government forces have carried out this policy even as Germany has started providing financial and military support to help their fight against ISIS.

I tried to imagine what it is like to have your home razed to the ground last year as I walked through the ruins of the Sunni Arab village of Idris Khaz’al, 20 kilometers west of Kirkuk city, with 15-year-old Ahmad. Amid the blocks of rubble, he pointed out the remains of his family’s home, his neighbor’s destroyed yard, where he played as a child, and the remnants of the shop where he used to buy milk. As we passed one wall of a nearly demolished house, I could distinctly make out where the shovel of a bulldozer cut out the bricks. After our visit, Ahmad headed back to a camp for displaced people where he lives with hundreds of other Sunni Arab families who have lost their homes.

This was the 12th destroyed village a colleague and I visited in northern Iraq in November 2015, and we visited others earlier this year. In early November, we visited two more Sunni Arab villages that KRG forces destroyed, after evicting the residents. With each visit, it became more and more obvious that this was not the result of fighting between the Kurdish Peshmerga and the Islamic State (also known as ISIS). This was a policy of deliberate destruction after the fighting was over.

On the night of January 29-30, 2015, ISIS took control of Idris Khaz’al and neighboring Idris Khubbaz. Most civilians fled. When Peshmerga forces took control on the evening of January 31, 2015, they ordered the few remaining villagers to leave, those villagers told us. As they were leaving they saw Peshmerga, Asayish forces, and civilian Kurds bring in bulldozers and start to destroy buildings in both villages.

We later asked the KRG authorities why the two villages had been destroyed. They first replied that coalition airstrikes and landmines “unavoidably detonated in the cleaning-up mission,” although the villagers had told us ISIS never had time to plant explosives in the houses. When we later examined satellite imagery of the villages taken over the week following January 31, it was clear that most of the destruction occurred around February 5, days after the Peshmerga took control of the area.

We closely examined the destruction in 19 other villages with field visits, interviews with witnesses and Kurdish fighters, and satellite imagery. We found a clear pattern of unlawful destruction of large numbers of Arab homes and sometimes entire Arab villages between September 2014 and May 2016 in areas of Kirkuk and Nineveh governorates – areas that Kurdish leaders insist were originally Kurdish – after they came under Peshmerga control.

In some mixed Kurdish-Arab villages – Bardiya and Hamad Agha for instance – Peshmerga destroyed homes of Arab villagers while those belonging to Kurds remained intact. We did not find a single case where there was an imperative military necessity for the destruction of a home. International law is clear: purposeful destruction of civilian property when there is no military need amounts to a war crime.

In another 62 villages that we were not able to visit, satellite imagery shows widespread destruction after Kurdish security forces recaptured them, but a lack of witness accounts did not allow us to draw any definitive conclusions about the destruction.

Abusive policies carried out with impunity like this one, targeting Sunni Arabs, are familiar in Iraq’s recent history and are part of the reason we have ISIS today. Displacing large numbers of Sunni Arab villagers runs counter to the objectives of the coalition trying to rid the region of ISIS.

Berlin has delivered tens of thousands of assault rifles and millions of rounds of ammunition and other equipment to the Peshmerga fighters and trained thousands of them. But it hasn’t persuaded Kurdish forces to stop destroying Arab homes and villages.

Germany’s government should make clear to the Kurdish leadership that abusive military practices are not only problematic for ongoing security cooperation but also for effective military operations. The military efforts against ISIS may look like a success. But it is not in anyone’s interest to create yet another generation of hundreds of thousands of displaced people like

Ahmad and his family, growing up in camps, marginalized, vulnerable, angry, and prime recruits for future extremist movements.