(Nairobi) – The Gambian government’s repression of the political opposition in the months prior to the December 1, 2016 presidential election threatens the fairness of the election, Human Rights Watch said in a report released today.

The 43-page report, “More Fear Than Fair: Gambia’s 2016 Presidential Election,” describes how the government of President Yahya Jammeh, who came to power in a 1994 coup, has used a crackdown on the opposition, domination of state media, and state resources for campaigning to ensure a political advantage in the election. Authorities have threatened, arbitrarily arrested, jailed, and tortured members of opposition political parties. Since April, more than 90 opposition activists have been arrested for participating in peaceful protests, with 30 sentenced to three-year prison terms. Two opposition activists have died in custody. 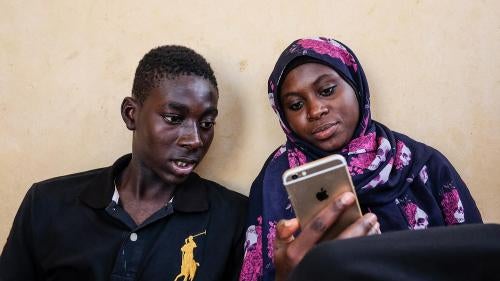 The report is based on more than 100 interviews conducted in Gambia, Senegal, and the United States, from March through September 2016. Human Rights Watch interviewed members of political parties, journalists, leaders of nongovernmental groups, lawyers, retired Gambian civil servants, former members of the security forces, and foreign diplomats. Human Rights Watch wrote to the Gambian government on October 19 with a summary of the report’s findings, but has not received a response.
Over the past 22 years, President Jammeh and the Gambian security forces have used enforced disappearances, torture, intimidation, and arbitrary arrests to suppress dissent and preserve his grip on power, Human Rights Watch said. They have repeated these tactics ahead of this year’s poll.
The April death in custody of an opposition activist, Solo Sandeng, presaged a crackdown on the opposition, principally targeting Gambia’s largest opposition party, the United Democratic Party (UDP). Sandeng was arrested on April 14, while leading a demonstration in favor of electoral reform. He was taken to the headquarters of the National Intelligence Agency and brutally beaten to death. The government broke up two further demonstrations on April 16 and May 9, arresting dozens of protesters, one of whom later died in custody.

Many other protesters arrested said that they were beaten and tortured in intelligence agency custody. Fatoumatta Jawara stated in an affidavit: “They took me to one dark place. They undressed me and I was so seriously beaten I collapsed.”
Since the April 14 protest, Jammeh has repeatedly threatened opposition parties. “Let me warn those evil vermin called opposition,” he said in May. “If you want to destabilize this country, I will bury you nine-feet deep.”
Jammeh’s inflammatory rhetoric has encouraged the police and army to use excessive force against protesters. When one protester was granted bail after his arrest in May, a senior police officer told him: “You better be careful, as whatever you say, we will know it. People in jail are safe…. You are outside, so you are in more danger, as we are watching you.”
Opposition parties have also been constrained by the legally mandated two-week official election campaign, the only time opposition parties receive any significant coverage on state radio and television. Although Gambia has numerous private newspapers and radio stations, many journalists temper their reporting about the government to avoid reprisals.

President Jammeh and the ruling Alliance for Patriotic Reorientation and Construction (APRC) have also routinely used state resources for campaigning, including government vehicles and buildings, and have mobilized civil servants and security force members on behalf of Jammeh’s re-election.
The Gambian government should immediately release all peaceful protesters, initiate a transparent and impartial investigation into opposition deaths in custody, grant opposition parties access to state media outside the framework of the official campaign, and cease using state resources for campaigning. The government should also ensure that the security forces respect the opposition’s rights to campaign freely and peacefully without fear of harassment or arrest.
Gambia’s key international donors should set clear benchmarks for the government to meet ahead of the election. If these benchmarks are not met, the Economic Community of West African States (ECOWAS) should suspend Gambia from its decision-making bodies, and the US and the European Union should impose travel bans, asset freezes, and other targeted sanctions on senior officials implicated in human rights violations.
“Elections should be a time for Gambians across the political spectrum to have their voices heard,” Olugboji said. “To demonstrate to opposition groups that they can function without fear, the government should immediately release their unjustly jailed members, ensure them immediate access to state media, and impartially investigate deaths in custody.”