(Beirut) – The Egyptian authorities should stop imposing travel bans to prevent human rights defenders from leaving the country and speaking out about Egypt’s appalling human rights record, Amnesty International and Human Rights Watch said after another prominent human rights lawyer was banned from traveling. The bans are part of a larger campaign to suppress independent, critical voices inside the country.

Early this morning, airport immigration officials prevented human rights lawyer and defender Malek Adly from boarding a flight to France without informing him of the reason for the ban, as required by law, he said by phone. Since the armed forces ousted President Mohamed Morsy in July 2013, the authorities have arbitrarily banned at least 12 other directors, founders, and staff members of Egyptian nongovernmental organizations (NGOs) from traveling abroad. Others who have been prevented from traveling outside the country include dozens of members of political parties, youth activists, bloggers, journalists, and academics. 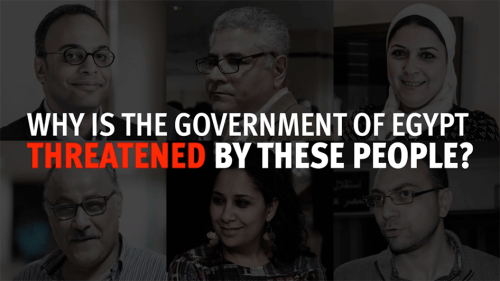 “The Egyptian authorities want to sever the connection between the Egyptian human rights movement and the outside world,” said Joe Stork, deputy Middle East and North Africa director. “The Egyptian government’s international supporters should insist on allowing the country’s human rights defenders to be heard.”

The authorities have imposed many of these travel bans arbitrarily or as part of an abusive criminal investigation into the registration and funding of NGOs. They are contrary to international human rights law and Egypt’s Constitution, both of which protect the right of Egyptians to leave and enter their own country, blatantly violate the rights to freedom of movement and association, and stifle the right to freedom of expression.

Under the International Covenant on Civil and Political Rights and the African Charter on Human and People’s Rights, both of which Egypt has ratified, everyone has the right to leave any country, including their own. Both treaties allow countries to impose restrictions on that right as long as they are provided by law and necessary and proportionate to protect national security, public order, public health, morals, or the rights and freedoms of others.

The Egyptian Constitution further guarantees the right to freedom of movement in Article 62. It states that a reasoned judicial order is required to impose such restrictions and, even then, this should only be for a specified period of time.

In many of the cases documented by Amnesty International and Human Rights Watch, airport authorities gave no reason for stopping the person from boarding a flight abroad and have refused to provide any formal documentation of the travel ban. In some cases, officers of the Interior Ministry’s National Security Agency questioned the traveler, searched their luggage and phones, and seized their passport without justification. In others, the Office of the Public Prosecutor ordered the bans in relation to criminal investigations without informing the individual of the particular case or charges against them. In most cases, the people barred from traveling have not been told when or if the ban will end.

In three cases known to Amnesty International and Human Rights Watch, political and human rights activists who have challenged the arbitrary travel bans imposed on them in relation to the abusive criminal investigation into the funding and registration of their NGO have had their case rejected in court.

“The Egyptian authorities are blatantly relying on open-ended arbitrary travel bans as a tactic to intimidate human rights defenders and hamper their work, stifling their rights to freedom of expression and freedom of movement.” said Najia Bounaim, North Africa deputy regional director for campaigns at Amnesty International. “All travel bans imposed on human rights defenders or political activists solely for peacefully exercising their rights should be immediately and unconditionally lifted.”

Egyptian authorities began cracking down on international and local nongovernmental organizations in 2011, when they opened an investigation into the groups’ registration and funding. Known as Case 173, the investigation culminated in a June 2013 ruling by a Cairo criminal court sentencing 43 foreign and Egyptian employees of international groups to prison sentences ranging between 1 and 5 years.

The court also ordered the closure of the international organizations in question: the International Republican Institute, the National Democratic Institute, Freedom House, the International Center for Journalists, and the Konrad Adenauer Foundation. Amnesty International and Human Rights Watch both condemned the ruling at the time and urged the authorities to respect the right to freedom of association and enable NGOs to carry out work in the country without hindrance.

Since late 2014, a new panel of investigative judges has increasingly targeted local human rights groups as part of Case 173.

The authorities have also banned Mohamed Lotfy, executive director of the Egyptian Commission for Rights and Freedoms, from leaving the country. It is unclear whether this is related to Case 173 or another criminal investigation. In June 2015, Lotfy was prevented from boarding a flight to Germany, where he was due to speak at a parliament round table about the deteriorating human rights situation in Egypt. President Abdel Fattah al-Sisi began an official visit to Germany and met with Chancellor Angela Merkel the next day.