(Istanbul) – Landmines placed decades ago by the Turkish military have killed at least three civilians trying to flee Syria and injured at least nine others, Human Rights Watch said today. The landmines, in a restricted zone along the border with Syria, threaten thousands more Syrian refugees.

To prevent further casualties and protect civilians, Turkey should undertake immediate efforts to safely relocate over 2,000 Syrian refugees remaining in the minefield and educate the refugees about the risk posed by the landmines, Human Rights Watch said. Turkey should clear all mined areas on its territory, starting with areas of its border with Syria where refugees may cross and mine clearance personnel can operate safely.

“To fall victim to a landmine after losing your home and fleeing your country is a fate no one should have to endure,” said Steve Goose, arms director at Human Rights Watch and chair of the International Campaign to Ban Landmines, a 1997 Nobel Peace Laureate. “Turkey has the capacity to clear its minefields and should clear them immediately.”

Fighting began around the Syrian border town of Kobani (or Ain al-`Arab in Arabic) between Kurdish forces and the extremist militant group Islamic State (also known as ISIS) in September 2014. Since then, thousands of Syrians have fled across the border into Turkey through a narrow strip of mined land just inside Turkey northwest and northeast of Kobani.

Satellite imagery recorded as far back as 1968 shows this strip of land is part of an extensive belt of minefields that the Turkish military laid along its border with Syria in the 1950s. Turkey reported that between 1957 and 1998, Turkish forces laid 615,419 antipersonnel mines along the Syrian border “to prevent illegal border crossings.”

The majority of the civilians fleeing Kobani have crossed into Turkey and been accommodated in nearby refugee camps. However, according to humanitarian workers, and apparent in recent satellite imagery, over 2,000 civilians remained as of November 18 in a section of the mine belt referred to as the Tel Shair corridor northwest of Kobani where they are at risk from landmines. They remain in the mine belt just inside Turkey because Turkey was refusing entry for cars or livestock and they did not want to leave behind their belongings. Human Rights Watch has also found evidence in satellite imagery recorded on November 14 that potentially hundreds more Syrian refugees remain in the mine belt near the Turkish villages of Mertismail and Çanakcı, less than 9 kilometers east of Kobani.

Turkey joined the Mine Ban Treaty in 2003, and as a state party had the legal obligation to perimeter-mark, monitor, and fence all mined areas as soon as possible “to ensure the effective exclusion of civilians.” It also had an initial treaty deadline of March 2014 to clear all mines, but received an extension until March 2022.

“Like other mine-contaminated areas, border minefields are not safe for civilians and should be cleared immediately to avoid further harm,” Goose said.

The Landmine Incidents
All of the incidents documented by Human Rights Watch occurred within the Tel Shair corridor, which runs along the Turkish side of the border immediately northwest of Kobani. Measuring between 300 and 400 meters in width, the corridor extends to the east, following a disused railway that physically marks the border between Turkey and Syria. To the north, the corridor is bounded by a barbed-wire fence that restricts further movement into Turkey.

The Tel Shair corridor area had at least 70 mine explosions between September 15 and November 15, according to humanitarian workers who spoke to Human Rights Watch. They also told Human Rights Watch that civilians died or were injured in at least six of these explosions, including one 10-year-old boy who was killed and seven other children who were wounded. In the other incidents, the mines were detonated by livestock, they said.

On November 7, a humanitarian worker told Human Rights Watch that a landmine explodes in Tel Shair every two to three days, caused by fleeing civilians or their livestock. He said refugees fleeing through the area have brought at least six undetonated landmines that they have cleared themselves to Turkish soldiers.

The injuries and deaths occurred when the victims were on foot, indicating that they stepped on antipersonnel mines. Some cars passing through the mined corridor have also been damaged, but no injuries have been reported as a result.

Human Rights Watch analyzed a detailed time series of satellite images recorded along the border, and identified a total of five large concentrations of civilians within the minefield belt to the northwest and northeast of Kobani. The satellite imagery confirms the presence of thousands of vehicles, as well as livestock, in the minefield as of November 13, the last available image date. 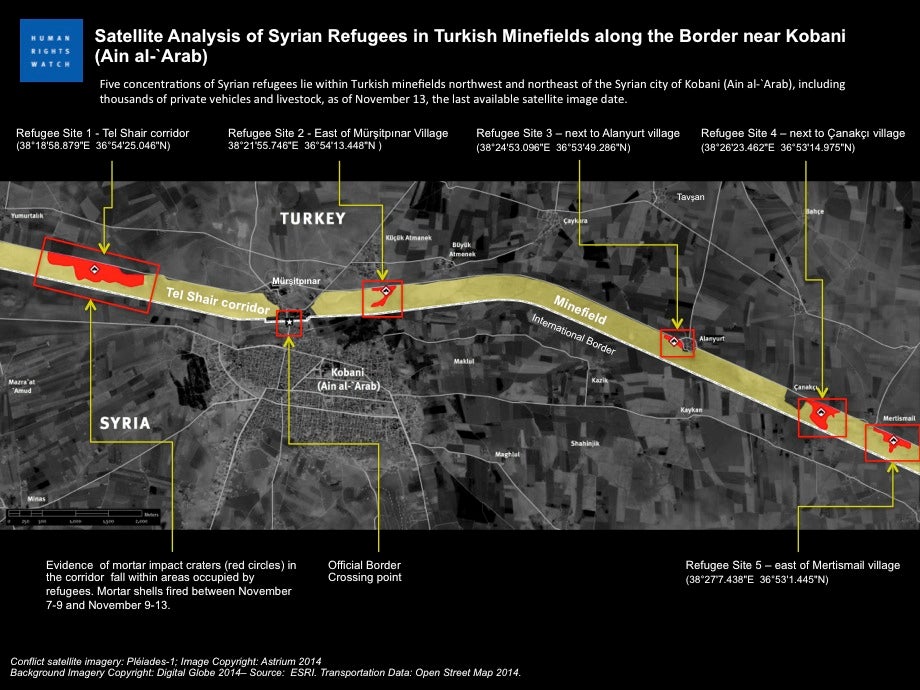 Two humanitarian workers in Turkey at the border told Human Rights Watch that many civilians fleeing the conflict in September and October crossed the border near Kobani with their cars and livestock, and remained within the Tel Shair corridor because Turkey was refusing entry for cars or livestock and the civilians did not want to leave their belongings. Some of the animals – cows and sheep – entered the unmarked minefields and detonated mines, they said, based on conversations with refugees who had crossed into Turkey.

Photographs provided to Human Rights Watch by humanitarian workers show what appears to be a US M2 bounding antipersonnel mine that was allegedly removed from the Turkish minefields north of Kobani. According to Turkey’s annual transparency reports, which are required by Article 7 of the Mine Ban Treaty, Turkey had in the past stockpiled large quantities of the M2.

Human Rights Watch has also identified clear evidence from the satellite imagery that the largest civilian concentration in the Tel Shair corridor was hit by multiple mortar shells between November 7 and 9, and again between November 9 and 13. 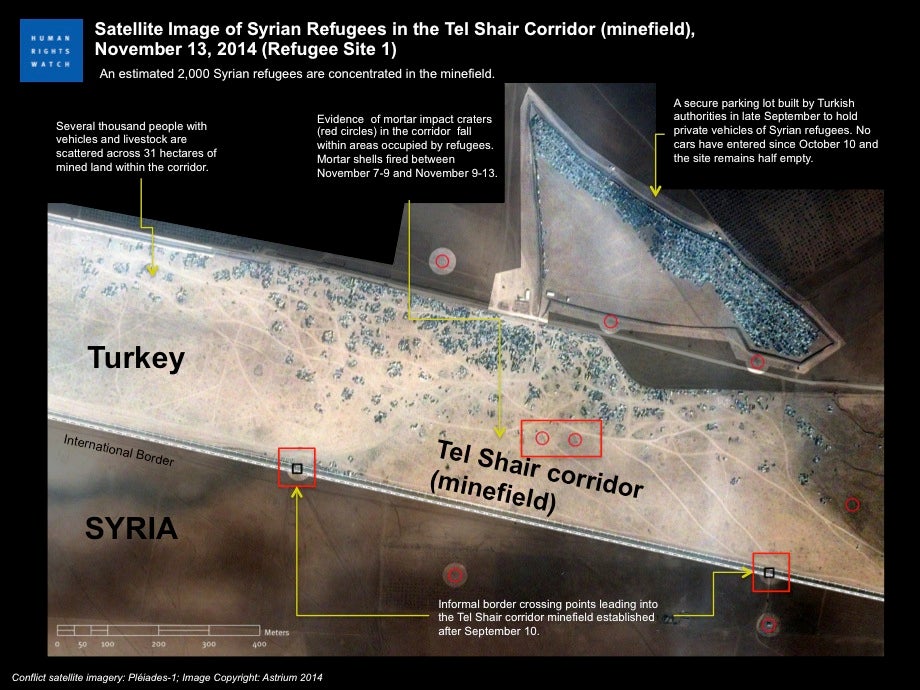 One of the humanitarian aid workers at the border told Human Rights Watch by phone that on November 8 at around 8 a.m., ISIS fighters launched approximately five mortars on the area where civilians were gathered. An activist in Kobani who spoke to Human Rights Watch also visited the border and confirmed the November 8 attack. The attack killed at least three people, including one child, and injured at least 15 others, they said.

A Landmine Victim’s Account
Human Rights Watch interviewed one Syrian Kurdish woman who stepped on a mine after she entered Turkey, badly wounding herself and her 7-year-old daughter. She said she did not see any signs warning that there were landmines in the area.

The woman, “Selma,” 35, a farmer and mother of six from the village of Zakariah, approximately 35 kilometers west of Kobani/Ayn al-Arab, said that she and her family fled their village after ISIS fighters attacked the area on September 16 and 17. The family escaped to the hills in the east, where they remained for three days until learning that ISIS forces had destroyed their homes, she said. After that, the family went to Kobani and joined a large number of people who were moving toward the Turkish border.

Selma said her family left their car and walked toward the border. They passed over the railway track into the Tel Shair corridor and were approaching the outter perimeter fence when she stepped on a landmine:

I was carrying my 1-year-old son, while my 7-year-old daughter was holding onto my dress. I stepped on a landmine and it exploded. My son fell to the ground, while my daughter suffered first degree burns on her face.

Selma estimated that after about 15 minutes four humanitarian workers came to assist her. They wrapped her leg in a bandage and carried her to a taxi bound for the State Hospital in Suruç, Turkey, a 30 minute drive away. At the hospital, doctors amputated her left leg, she told Human Rights Watch.

The Recent Landmine Deaths and Injuries
The following are the six incidents in which refugees were injured or killed by landmines while crossing in the west Kobani Tel Shair corridor, based on records reviewed by Human Rights Watch, including photos collected from humanitarian workers. All victims were on foot.

Turkey’s Landmine History; Syria’s Landmine Use
Turkey acceded to the Mine Ban Treaty in September 2003, becoming a State Party on March 1, 2004. A former landmine producer, Turkey is not known to have exported antipersonnel mines, but it imported the weapons from Germany and the United States.

In June 2011, Turkey completed the destruction of its 2.9 million stockpiled antipersonnel mines, long after its treaty-mandated deadline of March 1, 2008. It has been criticized for retaining a high number of antipersonnel mines – more than 15,000 – for the purpose of training in mine detection, clearance, and destruction techniques.

Under the Mine Ban Treaty, Turkey is required to destroy all antipersonnel mines in mined areas under its jurisdiction or control as soon as possible. In December 2013, Mine Ban Treaty states granted Turkey an extension of its mine clearance deadline until March 1, 2022 after Turkey acknowledged it would fail to meet the original deadline of March 1, 2014.

According to Landmine Monitor, a civil society based initiative that documents the humanitarian and developmental consequences of landmine use and the implementation of the treaty that bans antipersonnel mines, a 2009 Turkish law approved demining of minefields along the country’s 911 kilometer border with Syria and gave Turkey’s National Defense Ministry the lead role and responsibility for the demining process. In July 2013, the ministry cancelled demining tenders for clearing the border because of developments in Syria. It has provided no further information on its clearance plans for the southern border with Syria. Human Rights Watch has participated in the Landmine Monitor since its inception in 1999.

Human Rights Watch has previously documented the Syrian government’s use of landmines on its border in other areas. There were numerous media reports of new Syrian government mine-laying on the country’s borders with Lebanon and Turkey in late 2011 and early 2012. A Syrian government official told the Associated Press in November 2011 that “Syria has undertaken many measures to control the borders, including planting mines.” In March 2012, Human Rights Watch reported the use of Soviet/Russian-origin PMN-2 antipersonnel mines and TMN-46 antivehicle mines by Syrian forces in border areas near Turkey. Syria has not joined the Mine Ban Treaty.

The Mine Ban Treaty comprehensively prohibits antipersonnel mines and requires the clearance of all mined areas on territory under the jurisdiction or control within 10 years. A total of 162 countries have joined the Mine Ban Treaty, including Iraq and Jordan, but not Israel or Lebanon.