Children working on tobacco farms in the United States are exposed to nicotine, toxic pesticides, and other dangers. 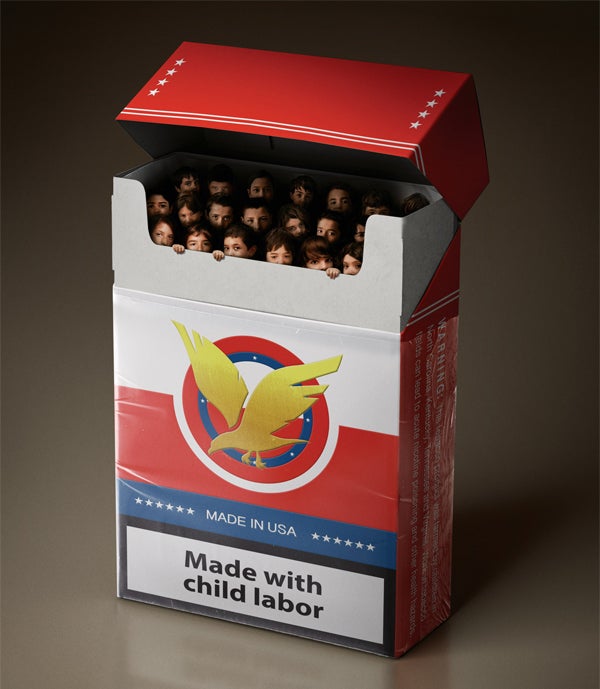 While US law prohibits the sale of tobacco products to children, children can legally work on tobacco farms in the US. The world’s largest tobacco companies buy tobacco grown on US farms, but none have child labor policies that sufficiently protect children from hazardous work.

The 138-page report, “Tobacco’s Hidden Children: Hazardous Child Labor in US Tobacco Farming,” documents conditions for children working on tobacco farms in four states where 90 percent of US tobacco is grown: North Carolina, Kentucky, Tennessee, and Virginia. Children reported vomiting, nausea, headaches, and dizziness while working on tobacco farms, all symptoms consistent with acute nicotine poisoning. Many also said they worked long hours without overtime pay, often in extreme heat without shade or sufficient breaks, and wore no, or inadequate, protective gear.

“As the school year ends, children are heading into the tobacco fields, where they can’t avoid being exposed to dangerous nicotine, without smoking a single cigarette” said Margaret Wurth, children’s rights researcher at Human Rights Watch and co-author of the report. “It’s no surprise the children exposed to poisons in the tobacco fields are getting sick.”

The report is based on interviews with 141 child tobacco workers, ages seven to 17 (view infographic).

Children working in tobacco farming face other serious risks as well, Human Rights Watch said. They may use dangerous tools and machinery, lift heavy loads, and climb several stories without protection to hang tobacco in barns. Children also reported that tractors sprayed pesticides in nearby fields. They said the spray drifted over them, making them vomit, feel dizzy, and have difficulty breathing and a burning sensation in their eyes.

Many of the pesticides used in tobacco production are known neurotoxins, poisons that alter the nervous system. The long-term effects of childhood pesticide exposure can include cancer, problems with learning and cognition, and reproductive health issues.Children are especially vulnerable because their bodies and brains are still developing.Human Rights Watch sent letters to 10 US and global tobacco companies and met with many of them to encourage these companies to adopt policies, or strengthen existing policies, to prevent hazardous child labor in their supply chains.

“Tobacco companies shouldn’t benefit from hazardous child labor,” Wurth said. “They have a responsibility to adopt clear, comprehensive policies that get children out of dangerous work on tobacco farms, and make sure the farms follow the rules.”

Health Hazards for Children
Several hundred thousand children work in US agriculture every year, but no data is available on the number working in tobacco farming. Many children interviewed by Human Rights Watch described going to work on tobacco farms at age 11 or 12, primarily during the summer, to help support their families. Most were the children of Hispanic immigrants who lived in communities where tobacco was grown and who attended school full-time.

Children Human Rights Watch interviewed described feeling suddenly, acutely ill while working on tobacco farms. “It happens when you’re out in the sun,” said a16-year-old girl in Kentucky. “You want to throw up. And you drink water because you’re so thirsty, but the water makes you feel worse. You throw up right there when you’re cutting [tobacco plants], but you just keep cutting.” A 12-year-old boy in North Carolina described a headache he had while working:“It was horrible. It felt like there was something in my head trying to eat it.”

Acute nicotine poisoning – often called Green Tobacco Sickness – occurs when workers absorb nicotine through their skin while handling tobacco plants, particularly when plants are wet. Common symptoms include nausea, vomiting, headaches, and dizziness. Though the long-term effects are uncertain, some research suggests that nicotine exposure during adolescence may have consequences for brain development.

Several children told Human Rights Watch that they had been injured while working with sharp tools and heavy machinery. In Kentucky, Tennessee, and Virginia, children often hand-harvest tall tobacco plants by cutting them with small axes and spearing the stalks onto long sticks with pointed ends. The children said they often cut or puncture themselves on the hands, arms, legs, and feet. A 16-year-old boy described an accident while harvesting tobacco in Tennessee: “I cut myself with the hatchet.… I probably hit a vein or something because it wouldn’t stop bleeding and I had to go to the hospital…. My foot was all covered in blood.” One 17-year-old boy interviewed by Human Rights Watch lost two fingers in an accident with a mower used to trim small tobacco plants.Almost none of the children Human Rights Watch interviewed said that employers had given them health and safety training or protective gear. Instead, children typically covered themselves with black plastic garbage bags in an attempt to keep their clothes dry when they worked in fields wet with dew or rain.

Federal data on fatal occupational injuries indicates that agriculture is the most dangerous industry open to young workers. In 2012, two-thirds of children under 18 who died from occupational injuries were agricultural workers, and there were more than 1,800 nonfatal injuries to children under 18 working on US farms.Most children interviewed by Human Rights Watch said they had no access to toilets or a place to wash their hands at their worksites, leaving them with tobacco and pesticides residue on their hands, even during mealtimes.

Lack of Protection Under US Law
Under US labor law, children working in agriculture can work longer hours, at younger ages, and in more hazardous conditions than children in any other industry. Children as young as 12 can be hired for unlimited hours outside of school hours on a farm of any size with parental permission, and there is no minimum age for children to work on small farms. At 16, child farmworkers can do jobs deemed hazardous by the US Department of Labor. Children in all other sectors must be 18 to do hazardous work.Regulations proposed by the Labor Department in 2011 would have prohibited children under 16 from working on tobacco farms, but they were withdrawn in 2012.

“The US has failed America’s families by not meaningfully protecting child farmworkers from dangers to their health and safety, including on tobacco farms,”Wurth said. “The Obama administration should endorse regulations that make it clear that work on tobacco farms is hazardous for children, and Congress should enact laws to give child farmworkers the same protections as all other working children.”

All of the companies except China National Tobacco responded and said they are concerned about child labor in their supply chains. However, the companies’ approaches do not sufficiently protect children from hazardous work, Human Rights Watch said. In some cases, companies allow for lower standards of protection for children in their US supply chain than for children working on tobacco farms in all other countries from which they purchase tobacco.

Human Rights Watch urged companies to prohibit children from engaging in all tasks that pose risks to their health and safety, including any work involving direct contact with tobacco plants or dry tobacco, due to the risk of nicotine exposure. Companies should also establish effective internal and third-party monitoring of labor policies.“Farming is hard work anyway, but children working on tobacco farms get so sick that they throw up, get covered by pesticides, and have no real protective gear,”Wurth said. “Tobacco companies should get children out of hazardous work on tobacco farms and support efforts to provide them with alternative educational and vocational opportunities.” 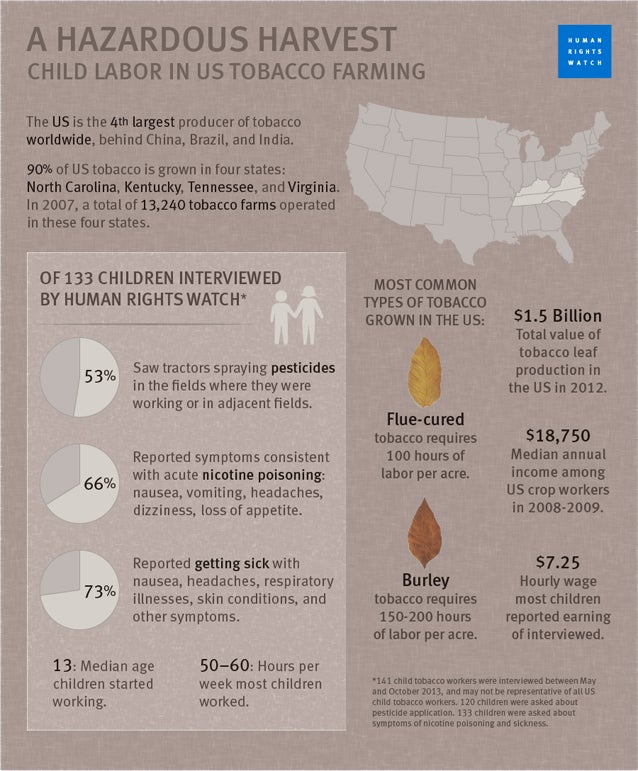