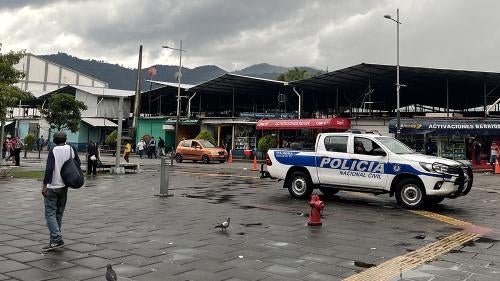 (New York) – Salvadoran security forces have committed widespread human rights violations since the adoption of a state of emergency approved in late March 2022, in response to a peak in gang violence, Human Rights Watch and Cristosal said in a joint report released today.

The 89-page report, “‘We Can Arrest Anyone We Want’: Widespread Human Rights Violations Under El Salvador’s ‘State of Emergency’” documents mass arbitrary detention, torture and other forms of ill-treatment against detainees, enforced disappearances, deaths in custody, and abuse-ridden prosecutions. President Nayib Bukele’s swift dismantling of judicial independence since he took office in mid-2019 enabled the abuses.

rights violations in the name of public safety,” said Juanita Goebertus, Americas director at Human Rights Watch. “To put an end to gang violence and human rights violations, El Salvador’s government should replace the state of emergency with an effective and rights-respective security policy that grants Salvadorans the safety they so dearly deserve.”

Since the state of emergency was adopted, police officers and soldiers have conducted hundreds of indiscriminate raids, particularly in low-income neighborhoods, arresting over 58,000 people, including more than 1,600 children. Officers have often targeted low-income communities where people have, for years, suffered insecurity and lacked economic and educational opportunities.

Between March 2022 and November 2022, Human Rights Watch and Cristosal interviewed more than 1,100 people from all 14 states in El Salvador, including during a Human Rights Watch visit to the country in October. Interviewees included victims of abuse, their relatives and lawyers, witnesses, and government officials. Researchers also reviewed relevant case files, medical records and death certificates, and consulted international forensic experts from the Independent Forensic Expert Group on some cases.

Human Rights Watch and Cristosal found that the police and soldiers carried out similar violations repeatedly, across the country, and over several months. Official policies and the rhetoric of high-level government authorities have in some cases created incentives for abuse, including by, at times, requiring officers to arrest a given number of people daily.

President Bukele has publicly backed the security forces and tried to intimidate the country’s few remaining independent judges and prosecutors who could investigate violations. He has also promoted dehumanizing rhetoric against detainees and their families, and stigmatized independent journalists and civil society groups that report on abuses.

Salvadoran authorities have not reported any progress in investigating human rights violations committed during the state of emergency.

The massive, indiscriminate arrests have led to the detention of hundreds of people with no apparent connections to gangs’ abusive activity. In many cases, detentions appear to be based on the detainees’ appearance and social background or on questionable evidence. Police and soldiers did not show people a search or arrest warrant, and rarely informed them or their families of the reasons for their arrest.

In one case, police arrested a 45-year-old professor and taxi owner at his taxi shop in the state of San Salvador. Before he entered Izalco prison, officers forced him to kneel on the ground for about two hours, under the sun, and to squat 25 times while naked. “Welcome to hell,” prison guards said, he told researchers.

As detainees walked to their cells, police officers stood on both sides and beat them, he said. The cell had capacity for 30 people but held 125. Guards told detainees they could not talk or pray and threw teargas in the cell every time someone disobeyed. He was released on bail on September 22.

In some cases, officers refused to provide information about the detainees’ whereabouts to their families, in what amount to enforced disappearances under international law.

Judges and prosecutors repeatedly failed to provide due process protections under international law, violating detainees’ human rights and making it difficult, if not impossible, for them to adequately defend themselves during criminal proceedings. Hearings were conducted in groups of up to 500 detainees, and over 51,000 people were sent to pretrial detention under recently approved Salvadoran laws that violate international human rights law.

The prison population increased from 39,000 in March 2022 to an estimated 95,000 detainees as of November, over three times the official capacity. Thousands have been held incommunicado for weeks or months, or were only allowed to see their lawyer for a few minutes before their hearings.

Some of the few people who were released from detention reported inhumane conditions and, in some cases, torture and other forms of ill-treatment. Ninety people have died in custody, in circumstances that have yet to be properly investigated.

There are serious reasons to question the long-term effectiveness of President Bukele’s security measures, Human Rights Watch and Cristosal said. Gangs have in the past benefited from mass incarceration by using prisons to recruit new members and consolidate their territorial control outside detention facilities. Failure to invest meaningful resources in prevention and reintegration policies, as well as to address illegal economies that allow gangs to thrive, have contributed to prolonged cycles of violence. In turn, past truces between the government and gangs have often caused only a short-term reduction of killings, followed by surges in gang violence.

The Bukele administration and the Legislative Assembly should adopt sustainable and rights-respecting steps to dismantle gangs and protect the population from their abuses, Human Rights Watch and Cristosal said. These include tackling the root causes of gang violence, including high levels of poverty and social exclusion, and conducting strategic criminal prosecutions focused on prosecuting higher-level gang leaders and investigating violent crimes.

The administration of US President Joe Biden and the European Union should rally multilateral pressure, including from governments in Latin America, to focus attention on the situation in El Salvador, including at the United Nations Human Rights Council.

“The international community should redouble its efforts to help ensure that Salvadorans are safe from heinous crimes by gangs, human rights violations by security forces, and other abuse of power,” Goebertus said.