(Istanbul) – The Turkish government is failing victims of domestic violence even though the police and courts have issued a rising number of restraining orders designed to protect women and break cycles of abuse, Human Rights Watch said in a report released today.

May 26, 2022
Combatting Domestic Violence in Turkey

The Deadly Impact of Failure to Protect

The 85-page report, “Combatting Domestic Violence in Turkey: The Deadly Impact of Failure to Protect,” found failure to enforce court orders leaves women open to continuing abuse from current or former husbands and partners. In some cases, women have been killed despite having obtained restraining orders intended to protect them. The research took place against the backdrop of Turkey’s July 2021 withdrawal from the Council of Europe Convention on Preventing and Combatting Violence against Women and Domestic Violence, known as the Istanbul Convention.

“While police and courts in Turkey are responding to women’s complaints of domestic violence by issuing more restraining orders, the failure to enforce them leaves dangerous protection gaps,” said Emma Sinclair-Webb, Europe and Central Asia Division associate director at Human Rights Watch. “The lack of enforcement has meant that women on the authorities’ radar have been killed by their abusers or subject to recurrent violence over years.”

Human Rights Watch conducted interviews with domestic violence victims and their lawyers, police officers, judges, and prosecutors. Human Rights Watch also examined in detail 18 cases in which women lodged complaints to the police or the prosecutor and had secured protective measures. These included court orders barring abusers from contact with victims, or, in a few cases, ordering measures such as shelter accommodation for the victim. 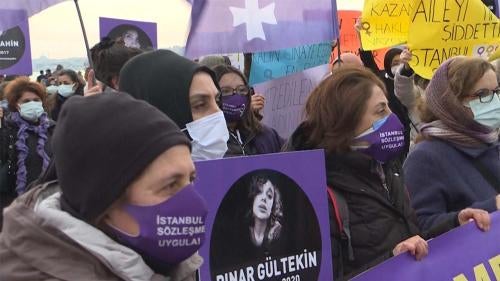 In six of the cases examined, the woman was killed by an abusive current or former husband or partner even though the authorities knew that she was at risk and that she had secured court orders to protect her. In other cases, women had secured multiple court orders, but their abusers repeatedly breached the orders, continuing the cycle of violence and intimidation.

The authorities are not effectively recording such breaches in their official records, Human Rights Watch found. Although the law provides that abusers can be detained for such breaches, men who ignore orders may escape this sanction.

“I kept getting restraining orders,” said Merzuka Altunsöğüt, a victim of recurrent domestic violence by her former husband. “They’d give us a piece of paper ‘Here you are, we’ve issued a restraining order. He won’t come.’ But the following day I’d come home from work and there he was again at the door.… I’d call the police and he’d have gone by the time they came. [They’d say], ‘Well, what can we do?’”

Human Rights Watch found that if an order proved effective, it was usually because a determined lawyer had represented the woman and pushed simultaneously for prompt prosecution of the perpetrator. Human Rights Watch found that it has become a common practice for women survivors, family members, or lawyers to take to social media or tell their story to journalists to demand resolute action by the authorities to restrain the abuser. Police officers and judges interviewed also said that officials tended to be responsive after media reports of domestic violence cases.

In the six lethal cases, the abusers were ultimately convicted of the killings. But the government has not addressed the failings of the authorities to meet their responsibilities to protect the right to life of victims known to have been at specific risk.

Human Rights Watch’s letters to the Ministry of Justice and the Ministry of Family and Social Services asking whether there had been any investigations over a lack of due diligence to ensure the women’s protection received no response. The Interior Ministry replied to the same letter, saying that nine police officers had received unspecified disciplinary sanctions related to one of six killings Human Rights Watch investigated. Another disciplinary investigation into two officers was ongoing. There had been no disciplinary action in the remaining four cases.

In September 2021, Turkey’s Constitutional Court issued a groundbreaking judgment, ruling that the negligence of civil servants, police, courts, and prosecutors had contributed to a woman’s murder by her former husband. The ruling closely matches European Court of Human Rights judgments in cases on domestic violence in Turkey.

The Constitutional Court’s judgement should mean that effective investigations are automatically conducted into the role and potential liability of public officials when women are killed by men against whom they have been granted restraining orders, Human Rights Watch said.

Human Rights Watch was disappointed that the Ministry of Family and Social Services refused its request to meet with personnel from the Violence Prevention and Monitoring Center in Istanbul, operating under the direction of the ministry, and charged with overseeing the implementation of all protective measures issued by the police and courts. Follow-up requests asking the minister to reconsider this decision were not answered.

Lawyers and women’s rights groups interviewed for the report raised significant concerns about Turkey’s July 2021 withdrawal from the Istanbul Convention and government policy not to promote gender equality. While Turkey still has its own Law to Protect the Family and Prevent Violence against Women (Law No. 6284) closely based on provisions in the Istanbul Convention, one lawyer described that law as “like a building whose foundations have been removed.” Turkey’s top administrative court, the Council of State, is due to rule on whether Turkey’s withdrawal from the Istanbul Convention was illegal because it was by presidential decree rather than by parliamentary vote.

Human Rights Watch made detailed recommendations for government action, including for better coordination among agencies to protect women from domestic violence, and better enforcement of court orders. Legal aid should be available to anyone who experiences domestic violence. The authorities should provide clear guidelines to prosecutors and courts that repeated breaches of protective and preventive orders may constitute grounds to place suspects facing prosecution for domestic violence in pretrial detention.

“While Turkey has an elaborate legal, regulatory, and institutional framework for combatting domestic violence, withdrawal from the Istanbul Convention and a government policy of rejecting gender equality undermines domestic efforts to combat violence against women,” Sinclair-Webb said. “Dispensing with international legal norms and failing to situate the eradication of gender-based violence within a broader struggle for women’s rights and gender equality legitimizes discrimination against women.”

Examples of cases in which women were killed as a result of multiple missed opportunities for the authorities to intervene with effective steps: