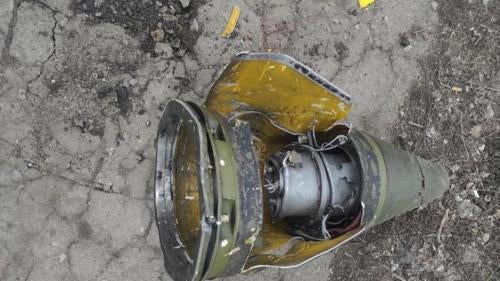 (Berlin) – A Russian ballistic missile carrying a cluster munition struck just outside a hospital in Vuhledar, a town in the Ukrainian government-controlled Donetska region, on February 24, 2022, Human Rights Watch said today. The attack killed four civilians and injured another 10, six of them healthcare workers, and damaged the hospital, an ambulance, and civilian vehicles.

Human Rights Watch interviewed separately by phone a doctor and an official from the hospital, known as the Central City Hospital, who gave the names of those who were wounded or killed, and shared photographs of two of the dead. Human Rights Watch also verified photographs posted to social media or sent directly by hospital staff that show damage from the attack, including two dead bodies, and the remnant of the weapon that was apparently used, a 9M79-series Tochka ballistic missile with a 9N123K cluster munition warhead.

An international treaty banning cluster munitions has been adopted because of their widespread indiscriminate effect and long-lasting danger to civilians. Cluster munitions typically explode in the air and send dozens, even hundreds, of small bomblets over an area the size of a football field. Cluster submunitions often fail to explode on initial impact, leaving duds that act like landmines. Neither Russia nor Ukraine is among the ban treaty’s 110 states parties.

On February 24, President Vladimir Putin of Russia announced military operations against Ukraine. Following the announcement, Russian armed forces began air and ground attacks on military installations across Ukraine. The announcement came during an emergency session of the UN Security Council, as tensions between Russia and the Ukrainian government peaked following a months-long build-up of Russian troops on Ukraine’s borders.

The full-scale invasion of Ukraine by Russian forces was preceded by President Putin’s signing of decrees recognizing the self-proclaimed “Donetsk People’s Republic” (“DNR”) and “Luhansk People’s Republics” (“LNR”) as independent territories and authorizing troops to occupy those areas on February 21.

The hospital’s chief doctor, Natalia Sosyura, described the attack: “I was on the first floor of our two-story building. I heard a loud explosion outside, we ran into the hallway. Luckily, we didn't have many patients. It was around 10:30 in the morning. We all fell to the floor.”

Dr. Sosyura provided the names of four civilians who were killed and said the hospital had treated 10 others for injuries, including six medical workers. An ambulance and three civilian cars were damaged, she said. Human Rights Watch verified two photographs of the damaged cars.

Human Rights Watch also spoke to Tetyana Tyurina, head of the Donetska regional administration’s information and communications department, who also said that four civilians were killed and 10 were injured, six of them medical workers. Two of the injured were taken to the Velykonovosilkivska Central Regional Hospital for treatment while the others were treated as outpatients, she said.

Human Rights Watch verified two photographs of the immediate aftermath of the attack that circulated on social media and a third that showed a remnant of the ballistic missile that was apparently used. One of these photographs showed two dead bodies partially covered by a tarp outside the hospital entrance and damage to the building and nearby vehicles. Human Rights Watch also received and verified 22 images of the hospital taken on February 25 by hospital staff. These images show damage to the hospital buildings, including smashed windows, and three damaged civilian vehicles.

Based on the photograph, Human Rights Watch identified the remnant of the weapon as the nose cone and radar altimeter antenna of a 9N123K cluster munition warhead delivered by a 9M79-series Tochka ballistic missile. The cluster munition warhead contains 50 9N24 fragmentation submunitions. According to the Russian manufacturer, each submunition contains 1.45 kilograms of explosives and shatters into approximately 316 uniform-sized fragments.

Both Russia and Ukraine stockpile the Tochka ballistic missile equipped with a cluster munition warhead.

Ukrainian government forces and Russia-backed armed groups used cluster munitions in eastern Ukraine between July 2014 and February 2015, according to investigations conducted by Human Rights Watch, the Organization for Security and Co-operation in Europe (OSCE) monitoring mission, and others.

Human Rights Watch documented the use of the same type of cluster munition in an attack by Russian and Syrian forces on Sarmin, Idlib governorate, in January 2020.

“All states party to the 2008 Convention on Cluster Munitions should unequivocally condemn this attack and any other use of his horrid weapon,” Goose said. “The risks to civilians are intolerably high.”