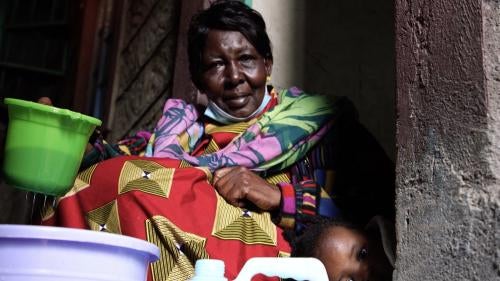 (Nairobi) – Kenyan authorities failed to design a social security program that would guarantee everyone, not just a few, an adequate standard of living during the pandemic, Human Rights Watch said in a report released today.

The 66-page report, “We Are All Vulnerable Here’: Kenya’s Pandemic Cash Transfer Program Riddled with Irregularities” found that only a small fraction of vulnerable families in Nairobi benefited from the program, which was characterized by lack of transparency, cronyism, nepotism and outright favoritism. Government officials failed to follow the stated selection criteria or to share information that should have enabled more vulnerable families to enroll.

“It is disappointing that an otherwise noble initiative can be this heavily undermined by negligence and inadequate oversight by the authorities,” said Otsieno Namwaya, East Africa Director at Human Rights Watch. “Senior government officials, including President Kenyatta, should demonstrate their commitment to providing crucial support for the vulnerable households, by publicly denouncing the mismanagement of the cash transfer program and ensuring credible investigations.”

President Uhuru Kenyatta announced on May 23, 2020, that he had allocated10 billion Kenyan Shilling ($100 million) specifically to cushion the vulnerable households from the economic impact of the Covid-19 pandemic.

Human Rights Watch found that the Covid-19 crisis has devastated many livelihoods since March 2020, when the authorities detected the first positive case in Kenya, and responded with stringent measures to control its spread, including curfews, stay-at-home orders, and other restrictions on movement. Thousands of individuals and families, who lost their only sources of income, with business closures and job losses, faced the threat of hunger and possible eviction.

Human Rights Watch found that the authorities were slow to respond to the needs of the vulnerable households. When the authorities finally created the eight-month cash transfer program, it was not only inadequate and short-lived but also lacked basic transparency. It provided no clear information about eligibility, how beneficiaries were identified, or why thousands of households that met the approved criteria were excluded.

The authorities had a responsibility to ensure that no vulnerable Kenyan was left out of the cash support program, and should have created a mechanism easily accessible to the vulnerable to appeal or challenge the decision to leave them out, Human Rights Watch said.

Although some of the containment measures have remained in place for over a year, cash transfers and tax relief ended in December. The government has imposed new taxes on essential commodities, including on baby food, fuel, and new bank loans, to raise money to fund government operations.

The Cabinet Secretary for Treasury and Planning, Ukur Yatani, told Human Rights Watch that the main criteria for selecting beneficiaries was households with high poverty index, nearly all of them in informal settlements in the case of Nairobi. It was also limited to households whose heads had certain medical conditions, disability, or other factors.

The program was carried out by village elders assisted by community health volunteers and youth leaders, supervised by chiefs, who are government employees, Yatani said. But researchers found that the chiefs largely ignored the criteria and instead registered their friends and relatives, many of whom did not even live in Nairobi.

“At least 25,000 out of the approximately 40,000 households in my area were in serious need of support,” one chief said. But I was allocated only 350 slots. I don’t know how our seniors [officials] arrived at that figure because they did not consult us on the ground. Still, just about 100 households…received the money. We don’t know how they decided.”

A worker in a Nairobi-based nongovernmental organization that helped enroll vulnerable households said: “We are interested in knowing who from the list we submitted benefited from government support. The system was not very transparent and was open to abuse.”

The authorities defended the secrecy. “The needy people who qualified for support here are very many and they would have flocked my office,” one administrator said. “How was I going to handle them?”

Residents also said that for most recipients, the program did not come anywhere close to the government’s stated 35 weekly installments, as many received just three to four installments.

The estimated eight informal settlements in Nairobi, according to Slum Dwellers International (SDINET), have over 600,000 households, all of them in dire need of support, with many having lost jobs or closed businesses. The number of those supported by the government program in Nairobi amounts to approximately 4.8 percent of households in informal settlements.

They should extensively review and strengthen internal mechanisms for implementing the program, including the criteria for selecting vulnerable households and accountability mechanisms such as oversight, supervision, and training of selectors, and establish effective complaint mechanisms, Human Rights Watch said.

Besides the Covid-19 pandemic-related cash transfer, the government also continued disbursing cash payments under the existing “Inua Jamii” National Safety Net Project. By May 23, 2020, President Kenyatta said the government was already sending out 250 million Kenyan Shillings ($2.5 million) to the most vulnerable households each week, but did not say when this started. He also said the government had a program to assist small businesses, but researchers found no evidence that small businesses in informal settlements benefited.

The authorities should further carry out a comprehensive needs assessment of the vulnerable households across Kenya to ensure that no one goes hungry and that the support provided is enough to meet the basic needs and an adequate standard of living, Human Rights Watch said.

Kenya, as a state party to the International Covenant on Economic, Social, and Cultural Rights (ICESCR), is obligated to ensure the enjoyment of the right to an adequate standard of living, including adequate food and housing as well as the fundamental right to freedom from hunger and malnutrition.

“Kenyan authorities should draw important lessons from the challenges the Covid-19 cash transfer has faced and work toward introducing long-term emergency response measures,” Namwaya said. “They should take concrete steps to ensure that for as long as emergency containment measures remain in place, vulnerable households, including those in Nairobi’s informal settlements, can afford basic food, rent, and other expenses fundamental to their human rights.”