One year after the start of the Covid-19 pandemic, the number of new Covid-19 infections is falling, but violent attacks and discrimination against Asian Americans and Pacific Islanders and people of Asian descent continue to rise. Since March 2020, advocacy groups have recorded nearly 3,800 anti-Asian hate incidents, disproportionately targeting women.

On March 16, a mass shooter in an Atlanta suburb targeted three Asian-owned business, killing eight people, including six Asian women. Police later arrested Robert Aaron Long, a 21-year-old white man, for the shooting. Long reportedly denied the killings were racially motivated, although Korean-language media are reporting a witness heard him say, “I will kill all Asians.” 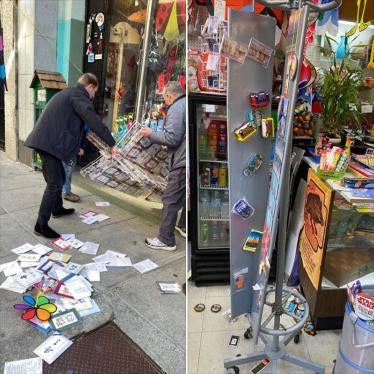 The attacks come as statistics show a 150 percent surge in anti-Asian hate crimes since the start of the pandemic. People of Asian descent are at greater risk of violence and racism than they were a year ago and many live in fear. Women and older people are especially at risk. Asian women experience 2.5 times more anti-Asian violence than their male counterparts while older people of Asian descent reported being physically assaulted 1.5 times more than the overall Asian American and Pacific Islander population.

Whether or not the killings in Atlanta are shown to be racially motivated, they reveal the gravity of the risk and fear people of Asian descent are facing. In addition to ensuring full and fair investigations and accountability for these crimes, local and national leaders should clearly and forcefully denounce anti-Asian racism, misogyny, and white supremacy; develop plans with Asian American and Pacific Islander and immigrant communities to confront violence; and ensure appropriate resources are available for crisis intervention, long-term safety, and healing.