Update January 28, 2021: On January 27, 2021 the Greek Ministry of Migration and Asylum’s press office shared by email with media outlets and with Human Rights Watch a 79-page document detailing the results from the soil sample testing conducted in late November 2020.

The Greek government should release test results and other vital information about lead contamination in a migrant camp on Lesbos island to protect the health of residents and workers, Human Rights Watch said today.

After testing soil samples in November, the government confirmed publicly on January 23, 2021 the presence of dangerous levels of lead in the soil in the administrative area of the Lesbos camp. It says that samples from residential areas showed lead levels below relevant standards but did not release the locations where samples were collected or the actual test results. The government has yet to indicate that it will take the necessary steps to adequately assess and mitigate the risk, including comprehensive testing and measures to remove people from areas that could be contaminated.

“The Greek government knowingly built a migrant camp on a firing range and then turned a blind eye to the potential health risks for residents and workers there,” said Belkis Wille, senior crisis and conflict researcher at Human Rights Watch. “After weeks of prodding, it took soil samples to test for lead contamination while denying that a risk of lead exposure existed. It did not make the results public for over seven weeks, and has yet to allow independent experts to analyze them or vow to take the necessary steps to protect residents and workers and inform them about the potential health risks.”

Human Rights Watch published a report in December documenting that thousands of asylum seekers, aid workers, and United Nations, Greek, and European Union employees may be at risk of lead poisoning in the Lesbos camp. Greek authorities built the new camp, Mavrovouni (also known as new Kara Tepe), on a repurposed military firing range. It now houses 6,500 people. According to a government announcement on January 23, one out of 12 soil samples taken in November came back on December 8 with lead levels that “exceeded the acceptable limit.” The announcement also mentions some steps to mitigate the risk. 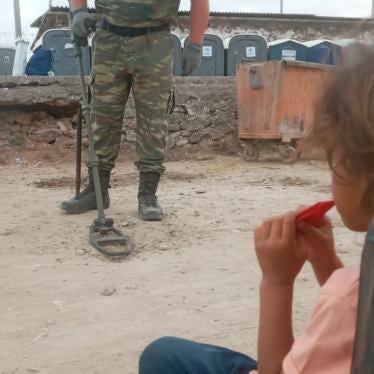 Human Rights Watch has requested the Greek government and the European Commission, which financially supports the camp and with which the government shared the results, to release the testing plan and the test results, which should include such information as the levels of lead for each sample, the sample depths and exact locations, a complete history of the site with location specifity, the expertise of those conducting the testing, the sampling methodology, and information on chain of custody. To date, neither the Greek government nor the European Commission has made this information available.

This lack of transparency means that it is impossible to assess the adequacy of the testing, evaluate what the results represent, or recommend specific strategies to address the identified risks. As a result, it is impossible to determine whether the measures laid out in the January 23 statement, such as adding new soil, gravel, and a cement base in some areas, are adequate to protect people who live and work in the camp.

In early September, large fires broke out inside the Moria camp, the Reception and Identification Center on Lesbos, which was housing 12,767 migrants, mostly women and children. Within days, the authorities constructed Mavrovouni and said they would construct a new permanent camp. Young children and women of reproductive age are most at risk for negative effects from lead exposure.

In a meeting with Human Rights Watch on January 20, Minister for Migration and Asylum Notis Mitarachi said that he hoped that the residents of Mavrovouni would not spend another winter there, but did not specify when the new camp would be ready. Construction has yet to begin.

Mavrovouni functioned as a military firing range from 1926 to mid-2020. Firing ranges are well recognized as sites with lead contamination because of bullets, shot, and casings that contain lead and end up in the ground. Lead in the soil from bullet residue can readily become airborne, especially under dry and windy conditions, which are often present on Lesbos. Lead is highly toxic when ingested or inhaled, particularly to children and anyone who is pregnant or lactating. The World Health Organization (WHO) maintains that there is no known safe level of blood lead concentration. Lead degrades very slowly, so sites can remain dangerous for decades.

After multiple representations by Human Rights Watch to various Greek authorities, the European Commission, the UN refugee agency, UNHCR, and the WHO, the Greek government and the EU Commission commissioned the Hellenic Authority of Geology and Mineral Exploration to take 12 soil samples on November 24. According to the government, 11 soil samples showed lead levels “below the acceptable limits for lead in soil,” based on Dutch standards.

The 12th sample, taken from what authorities described as an “administrative area” on the Mavrovouni hill, “at the end of the firing range,” showed elevated levels of lead above acceptable limits, but authorities did not reveal the concentration of lead in the soil. Mitarachi told Human Rights Watch that the area that showed lead levels above acceptable limits was fenced off, but residents and two aid workers said there were no fences inside the camp in that area or signs warning of a contaminated area. At least five aid organizations have offices in that area. An aid worker said residents, sometimes as many as 200 and including children, line up there for support and information. Younger children risk ingesting lead as they play or sit on contaminated ground.

Human Rights Watch was unable to determine whether the government shared any information with humanitarian agencies about the testing results, but calls with agencies including UNHCR and the WHO indicated that they were not aware of them prior to the January 23 release. A staff member from one aid organization there said that at least one aid worker in the camp is currently pregnant, and 118 camp residents are pregnant, based on November government data.

An environmental expert whom Human Rights Watch consulted said that, given the potential size of the affected area and the likelihood that elevated levels are the result of historic activity, the fact that one out of 12 samples in an area came back positive should trigger further testing.

Greek authorities should immediately release the results and testing plan to the public, and take measures to mitigate the risk to the health of camp residents and workers, Human Rights Watch said. The authorities should ensure that residents and workers are informed about the results and measures to protect their health in languages they can understand. The authorities should also urgently undertake further testing and allow independent experts to comment on investigative work plans, audit the soil testing process, and collect split samples (a sample that is separated into at least two parts so that testing can be carried out at two or more seperate laboraties in order to confirm results) or carry out independent testing.

The European Commission, which financially supports Greece to manage the camp and has staff stationed there, EU agencies, Frontex, and the European Asylum Support office, as well as United Nations agencies, UNHCR, UNICEF, the IOM and the WHO, should urge Greek authorities to make the detailed results and testing plan public, and push authorities to find alternative and safe housing solutions for those affected, including the option of moving them to the mainland. The European Commission, which was given the results and testing plan by the Greek government, should also make public the detailed information it received on the results and the methodology of the testing, to allow independent experts to comment on the risk to residents and workers in the camps.

“Greece and its EU partners have a duty to make sure that people who live and work in the Mavrovouni camp are safe,” Wille said. “That requires transparency about the risks as well as urgent steps to mitigate them.”

In its January 23 statement and in its meeting with Human Rights Watch on January 20, the Greek government made several inaccurate claims regarding remediation and protection of residents. In its statement, the government claimed that after soil samples were taken on November 24, “while awaiting the results” it removed the tents directly on the firing range strip. But satellite imagery and residents’ and workers’ statements indicate that no tents were removed until between December 11 and 16, after the test results were received.

Satellite imagery and aid organization mapping of the camp shows that by January 10, 79 tents remained on the firing range, with 58 more at the base of the hill. The residents in those tents may be at increased risk of coming into contact with contaminated soil, particularly when it rains. In addition, after some tents were removed, three migrants and two aid workers told Human Rights Watch that residents have been using the area for football and other recreation. Authorities have not fenced off the area or notified residents of the health risks.

Since the site was tested, major construction work and heavy rains in the area mean that potentially contaminated soil from the hill and firing range area may have moved to other parts of the camp, which warrants further testing.

Human Rights Watch received information from multiple sources that on January 18, the International Organization for Migration (IOM), which runs two assistance programs in the camp, suspended its operations at its tent on the hill. In response to a Human Rights Watch query, IOM’s Chief of Mission in Greece confirmed that, “Following the announcements regarding lead detection outside the accommodation areas and while waiting for more information from the authorities, IOM staff has been advised to remain inside the residential area.”

In an aid briefing on January 19, the sources said it was revealed that the decision was made because of elevated levels of lead found in the “blue zone” of the camp, an area that includes the firing range and the base of the hill where the IOM Helios tent is located, as well as other aid tents including that of Médecins du Monde (MdM), and the International Rescue Committee (IRC). IOM staff have yet to return to the camp, but aid workers still in the camp said there is still no fencing or signage around that area. According to the camp residents and two aid workers, and 24 photos and videos taken from inside Mavrovouni by the DunyaCollective, a media collective, since December, authorities have been moving large quantities of soil, including removing some from the hill behind the IOM Helios tent.

On January 23, Medecins Sans Frontieres (Doctors without Borders or MSF) issued a statement raising its concerns at the lack of appropriate government and EU action in the face of the testing results. On January 26, a group of 20 nongovernmental groups issued a joint statement calling on the Greek authorities to immediately evacuate camp residents and transfer them to appropriate structures on the mainland and elsewhere, such as hotel units.

Aerial footage from January 14 shows tents still present in the part of the camp built on the former firing range at that date starting at around 02:00.

Update January 28, 2021: On January 27, 2021 the Greek Ministry of Migration and Asylum’s press office shared by email with media outlets and with Human Rights Watch a 79-page document detailing the results from the soil sample testing conducted in late November 2020.