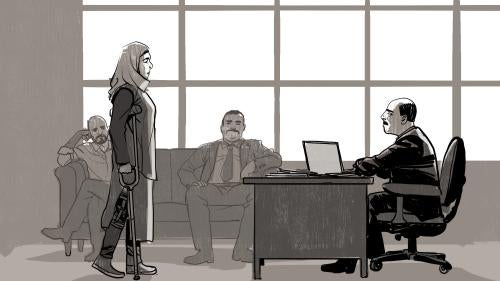 Discrimination and Barriers Facing Women and Girls with Disabilities in Afghanistan

The 31-page report, “‘Disability Is Not Weakness’: Discrimination and Barriers Facing Women and Girls with Disabilities in Afghanistan,” details the everyday barriers that Afghan women and girls with disabilities face in one of the world’s poorest countries. Decades of conflict have decimated government institutions, and development efforts have failed to reach many communities most in need. The Afghan government should urgently reform policies and practices that prevent women and girls with disabilities from enjoying their basic rights to health, education, and work. Afghanistan’s donors should support and advocate for the rights of all Afghans with disabilities.

Afghanistan has one of the world’s largest populations per capita of people with disabilities. More than four decades of war have left millions of Afghans with amputated limbs, visual or hearing disabilities, and depression, anxiety, or post-traumatic stress. The under-resourced Afghan health services are failing to meet the needs of this population, and women and girls with disabilities are far less likely to obtain any assistance.

Human Rights Watch interviewed 26 women and girls with disabilities and their families in the cities of Kabul, Herat, and Mazar-e Sharif, and 14 health and education professionals in these cities.

A young woman whose family moved to the city because of her disability said: “I know people who are in remote districts, but since they have no one [to bring them], they cannot benefit from [healthcare] services.”

Government officials have sexually harassed women with disabilities, including when they visit ministries to claim disability benefits. The stigma associated with reporting abuse of this kind means that few women, especially those with disabilities, report those responsible. A woman in Kabul said: “I went to the ministry to get this certificate [for assistance]. They asked me whether I am married and when I said no, they told me that they can find me a husband. When I refused, the ministry employee told me that I can get this certificate only if I agree to be his girlfriend.”

Entrenched discrimination means that people with disabilities face significant obstacles to education, employment, and health care, rights guaranteed under the Afghan constitution and international human rights law. For example, many people with disabilities in Afghanistan have not been able to acquire the national identity card (taskera) needed to obtain many government services.

Girls with disabilities are far more likely to be kept home from school because of compounded socio-economic barriers and violence. An official with a humanitarian group said that children with disabilities “cannot go to regular schools due to lack of ramps. In some cases, the school principals do not want to enroll them, because they need to be taken care of.”

Afghan women and girls with disabilities are frequently socially isolated, humiliated in public or within their own families, considered a source of shame for the family, or denied access to public spaces and community or family social events. “I’m supposed to get married, but my future in-laws think I cannot now,” said a woman injured during fighting in 2017. “I have no hope for the future, but if I get treatment, I would have hope.”

“In preparing for possible peace talks, Afghanistan’s leaders have generally ignored the large population of Afghans who have disabilities, many as a direct result of the conflict,” Gossman said. “The government needs to ensure that anyone with a disability gets the assistance they need, now and in the future.”