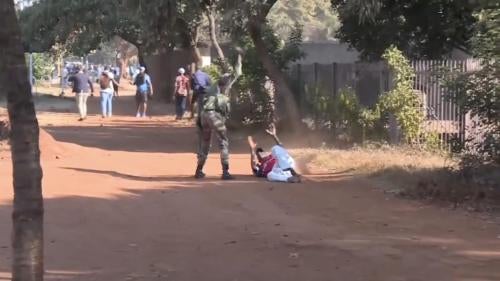 The European Union yesterday called on the Zimbabwe government to ensure perpetrators of human rights violations are swiftly brought to justice and immediately implement the recommendations of an inquiry into violence following the 2018 elections.

The Motlanthe Commission of Inquiry, set up by President Emmerson Mnangagwa following the post-election violence of August 1, 2018, found that six people died and 35 others were injured as a result of actions by the state security forces. Some commission recommendations, which have yet to be implemented, include ensuring perpetrators are held accountable and a special committee to compensate those killed and those who lost property is set up.

Human Rights Watch investigations found some state security forces used excessive and lethal force to crush nationwide protests in January 2019. During and after the protests, the forces fired live ammunition that killed 17 people, and at least 17 women were raped. No security force personnel have been arrested or prosecuted for these abuses. The authorities have also yet to fulfill the requirements of section 210 of Zimbabwe’s Constitution by establishing an effective and independent mechanism for investigating complaints from members of the public regarding misconduct by security services and remedy any harm done.

The EU renewed, for a year, its arms embargo and a targeted asset freeze against one company, the Zimbabwe Defense Industries, pending an investigation into the role government security forces may have had in human rights abuses. It explained that the arms embargo and the asset freeze against the company would not affect the Zimbabwean economy, foreign direct investment, or trade.

The EU said it is ready to review the whole range of its policies at any time, when justified, based on developments in Zimbabwe and that it will seek increased collaboration with international partners, most importantly the African Union, the Southern African Development Community, and international financial institutions, which can play a key role by supporting Zimbabwe in enabling an inclusive dialogue and in accelerating progress in reforms.

The Mnangagwa government should demonstrate that it is serious about upholding human rights and the rule of law. It should ensure government security forces responsible for abuses are appropriately punished, to end the impunity that has characterized alleged abuses by government forces in the past.