(Beirut) – Forces affiliated with the Libyan National Army (LNA) used cluster munitions in a residential area in Tripoli on December 2, 2019, Human Rights Watch said today. The forces, under the command of Khalifa Hiftar, have been battling forces loyal to the United Nations-recognized Government of National Accord (GNA) for control of Tripoli, the capital.

“Using cluster munitions shows reckless disregard for the safety of civilians,” said Stephen Goose, arms division director at Human Rights Watch and chair of the Cluster Munition Coalition. “Cluster munitions should never be used by anyone under any circumstances due to the foreseeable and unacceptable harm for civilians.”

The LNA or their international supporters carried out an airstrike on or around December 2 in a residential area adjacent to al-Asfah road near the Airport Road in the southern suburbs of Tripoli. There were no reports of casualties. Human Rights Watch visited the site on December 17 and found remnants of two RBK-250 PTAB 2.5M cluster bombs, as well as evidence that high-explosive air-dropped bombs were also used in the attack. The area was not known to be contaminated by cluster munitions before the attack. 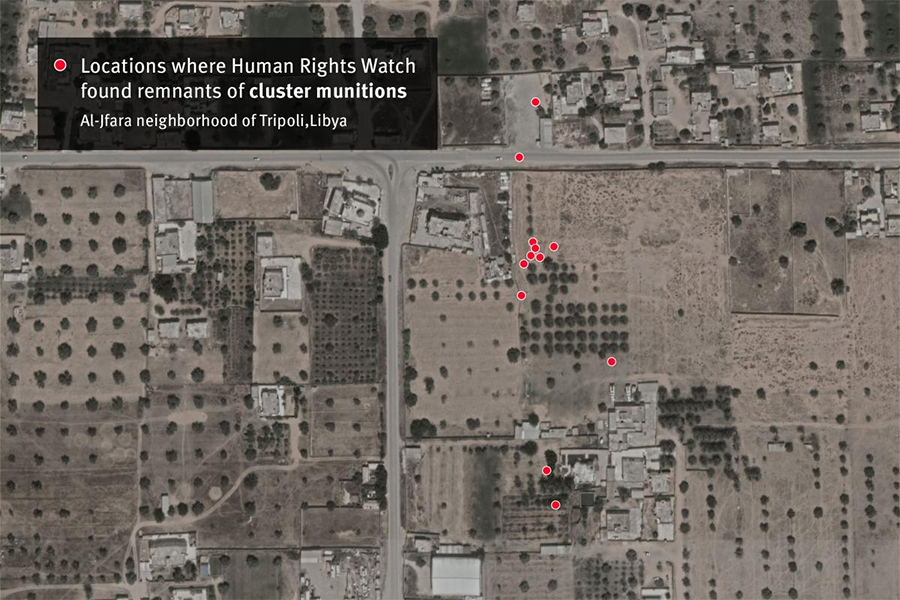 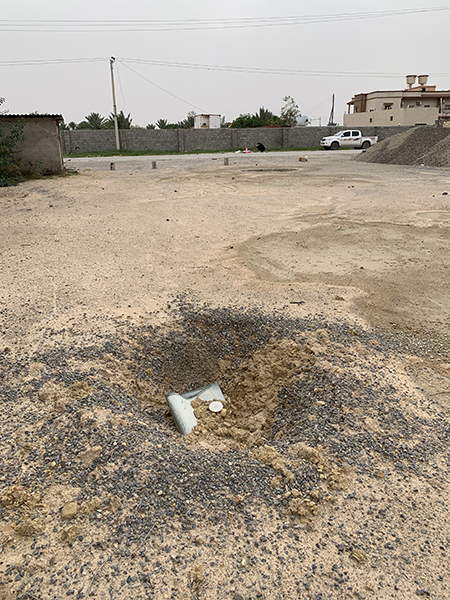 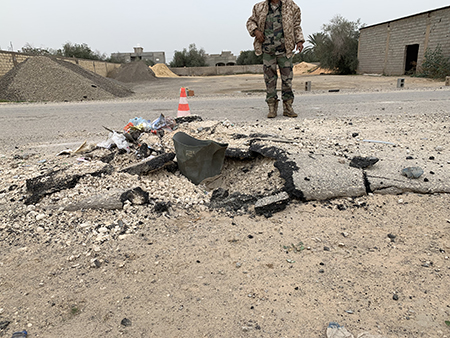 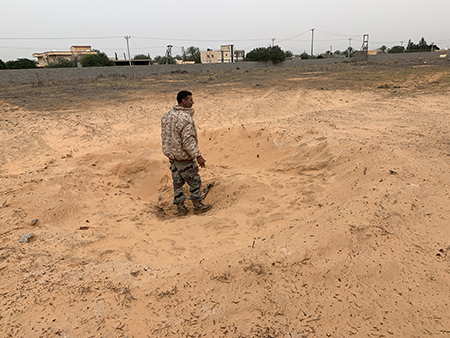 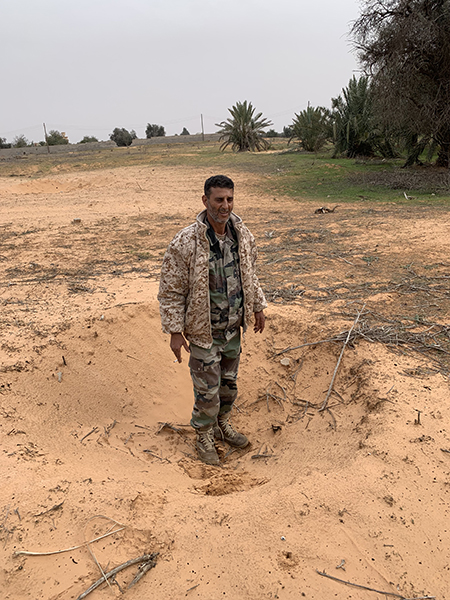 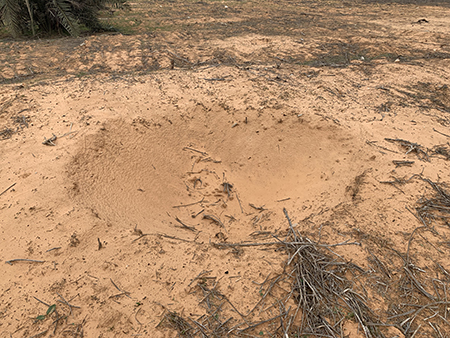 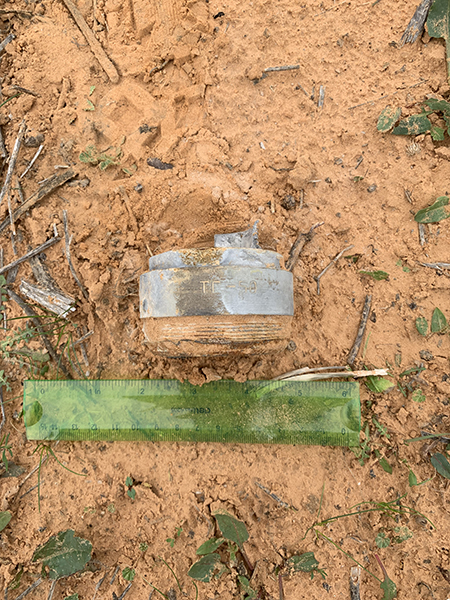 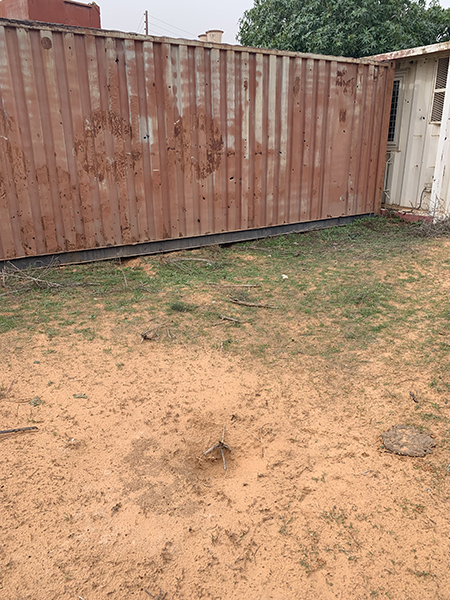 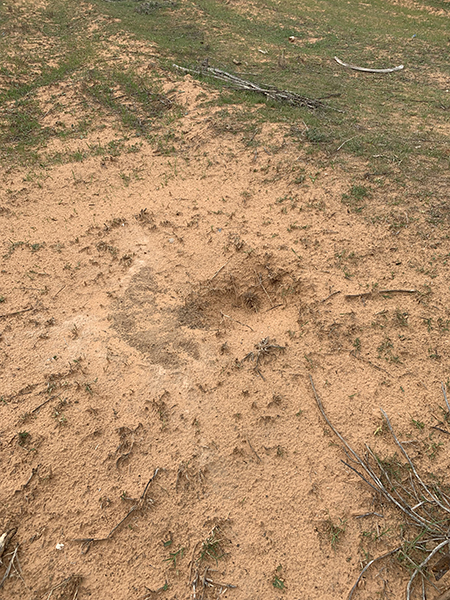 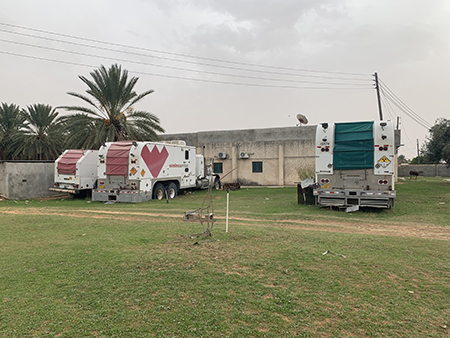 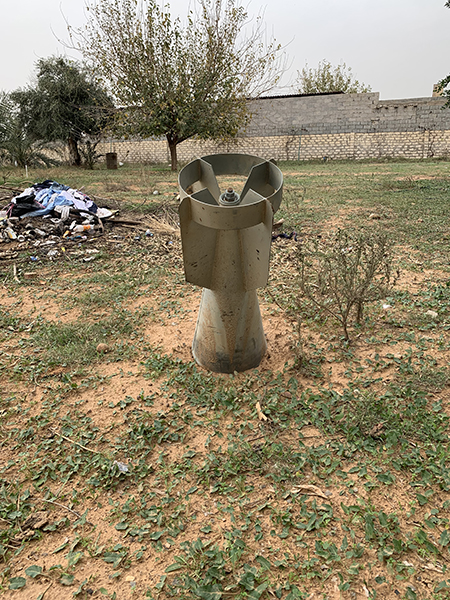 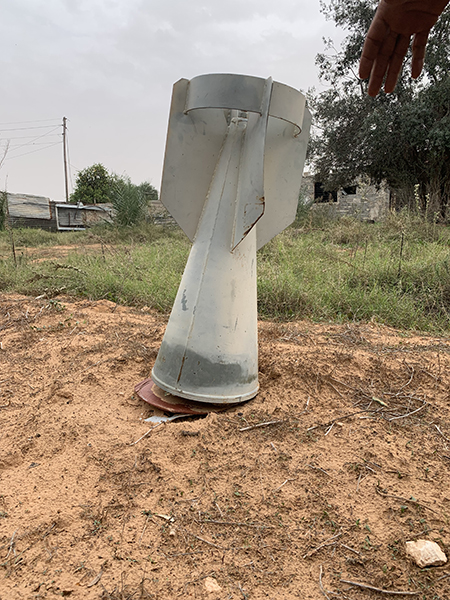 The 2008 Convention on Cluster Munitions comprehensively prohibits cluster munitions and requires their clearance as well as assistance to victims. Libya has not joined the treaty, but all parties to the armed conflict in Libya should abide by the emerging norm it establishes against any use of cluster munitions in any circumstances.

Cluster munitions have been banned because of their widespread indiscriminate effect and long-lasting danger to civilians. They typically explode in the air and send dozens, even hundreds, of small bomblets over an area the size of a football field. Cluster submunitions often fail to explode on initial impact, leaving duds that act like landmines.

During the December 17 site visit, Human Rights Watch interviewed two men who said they were there during the attack. Both men were members of an armed force under the Tripoli-based GNA who were guarding a checkpoint on a main road al-Asfah running through the residential area. The men said there had been no casualties from the attack.

One of the men, who asked not to be named, said that most residents had left the area after months of sustained fighting. But he said that a cluster munition had landed in the yard of a man of about 80, who had refused to leave his home. The guard said the attack was sudden and that he heard the strong explosions of what he believes were the bombs landing in the field.

A researcher found remnants of two cluster munitions and the small but distinctive impact craters of multiple explosive submunitions. Each RBK-250 PTAB-2.5M cluster bomb contains 30 PTAB-2.5M high explosive anti-tank (HE/AT) submunitions. The remnants included the tail and cargo sections of the bombs as well as the fuze rings of the submunitions that detonated.

Larger craters from the explosion of at least two other high-explosive bombs, apparently dropped simultaneously with the cluster munitions, were in the same area. The affected area totalled 17,000 square meters of mixed residential, agricultural, and vacant land. One cargo section of the cluster bombs hit al-Asfah Road, near its intersection with Hay al-matar airport road.

The intended target of the attack is unclear. Human Right Watch did not observe any military use of the location. A researcher saw three large trucks used for telecommunications wire-laying approximately 130 meters from the field where the bombs fell but could not ascertain when the trucks were moved there. Shipping containers along one side of the field appeared to have been placed there as a wall. They were locked. The guard said there had been no military use of the residential area either before or at the time of the attack.

In April 2019, fighters affiliated with the armed group known as the LNA, which is based in eastern Libya and aligned with the Interim Government headquartered in Benghazi and al-Bayda, attacked armed groups loyal to the rival Tripoli-based GNA. According to the UN, airstrikes were the leading cause of civilian casualties as a result of the fighting in western Libya, accounting for 182 out of 284 documented civilian deaths in 2019, between April and December. The UN also said that at least 150,000 people have been internally displaced because of the conflict and that 220 schools have been shuttered, affecting the schooling of at least 116.000 children.

The LNA has received military support from the United Arab Emirates, Jordan, and Egypt, in violation of the Libya arms embargo, based on a report by the Panel of Experts of the Libya Sanctions Committee. The UAE has supported the LNA with armed drones and launched airstrikes in support of the LNA with its fighter jets.

Turkey has reportedly supported the GNA with armed drones, in violation of the Security Council arms embargo, and signed a Memorandum of Understanding with the GNA on November 27 that lays the groundwork for military intervention and support of the GNA.
Fighters from Sudan and Chad have been fighting for both sides, and Russian fighters have been involved in fighting on behalf of the LNA, news reports said. News reports that Syrian fighters had arrived in Libya in December and have been fighting in support of the GNA were confirmed by the head of the UN mission in Libya,who estimated the number of Syrian fighters to range between 1000-2000.
To help bring an end to the cycle of impunity in Libya, the UN Human Rights Council in Geneva should, during its March 2020 session, establish an International Commission of Inquiry to document violations, identify those responsible, preserve evidence where possible for future criminal proceedings, and publicly report on the human rights situation in Libya, Human Rights Watch said.

Libya: Q&A on an International Commission of Inquiry (English)

Cluster munitions are prohibited by the Convention on Cluster Munitions, which 108 countries have ratified. Libya should take the necessary steps to join the Convention on Cluster Munitions without delay, Human Rights Watch said.
“All parties to the conflict in Libya should commit not to use cluster bombs and safely destroy any stocks of these weapons,” Goose said.
Cluster Munition Use in Libya
In the past, various factions in Libya have used cluster munitions, including Muammar Gaddafi’s government in the fighting that took place during the 2011 uprising that ended his 42-year reign.
Human Rights Watch has documented cluster munitions use in Libya in the recent years, but because of the many armed groups involved in conflicts during this period, it has been difficult to independently confirm specific attacks or identify who may be responsible.
According to the Cluster Munition Monitor, which monitors compliance with the international Convention on Cluster Munitions, the status and composition of Libya’s stockpiled cluster munitions is not known, especially comprehensive information on the types, quantities, and storage locations. From the use of cluster munitions in recent years, it is clear that Libya has stockpiled air-dropped bombs (RBK-series bombs containing AO-1SCh and PTAB-2.5M submunitions), ground-fired munitions (MAT-120 mortar projectiles containing submunitions), and an unidentified type of submunition contained in Grad-type 122mm surface-to-surface rockets.
Stockpiled cluster munitions were seized by anti-government forces and civilians in 2011, after storage facilities at arms depots were abandoned by government forces and subjected to NATO airstrikes. There has been no systematic or coordinated stockpile destruction effort by successive interim governments or international actors.
In March 2012, Human Rights Watch visited an ammunition storage depot in Mizdah, 160 kilometers south of Tripoli, which NATO warplanes had attacked more than 50 times between April and July 2011. Human Rights Watch found approximately 15 PTAB-2.5M bomblets and about three dozen submunitions of an unidentified type.
Evidence of Cluster Munitions use in Post-Gaddafi Libya
On August 15 and 16, 2019, aircraft of forces affiliated with the LNA used cluster munitions in an attack on Zuwarah International Airport, according to the UN Panel of Experts report from December 2019. The UN mission in Libya (UNSMIL) dispatched an assessment mission to the location and found no military assets or military infrastructure at Zuwara Airport.
Prior to the August 2019 incidents, Human Rights Watch documented use of cluster munitions in Sirte, Watiya, and Ben Jawad, in 2015.