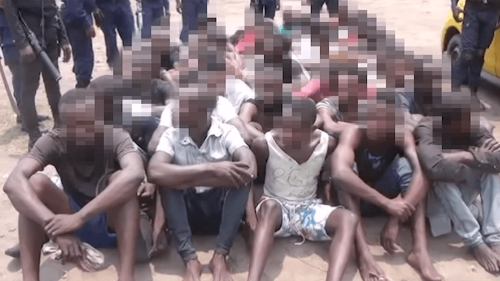 One year ago, on the night of May 3 to 4, 2018, police in Kinshasa, Democratic Republic of Congo dragged four alleged gang members, called kulunas, from their homes and fatally shot them. Their deaths were the first in the latest brutal police campaign, known as Operation Likofi, targeting kulunas in the capital.

Between May and September, security forces summarily killed at least 27 young men and boys and forcibly disappeared 7 others in Kinshasa. Police officers, often wearing civilian clothes, went to their homes or other locations at night. In many cases, the police blindfolded and bound the victims, took them to unidentified locations, and executed them. Often the police dumped the bodies near their homes early the next morning. Most victims were strangled – an apparent strategy to direct attention away from the police.

Kulunas, responsible for serious crimes including armed robbery and violent assaults, have been a serious problem in Kinshasa since 2006. But “Likofi IV” was just the latest iteration of an illegal and ineffective security strategy to deal with the gangs under then-President Joseph Kabila. The first Operation Likofi, from November 2013 to February 2014, implicated the police in the summary executions of at least 51 young men and boys and the forced disappearance of 33 others.

Human Rights Watch has learned that an investigation into these killings and enforced disappearances in one commune, Kalamu, has stalled because of a lack of cooperation from police authorities and government officials. We are not aware of any judicial investigations in the two other affected communes, Kisenso and Limete.

“What hurts me is not knowing who killed him, and why they killed him,” said a woman whose 27-year-old son was killed one year ago. “Everyone in the neighborhood knows it was Operation Likofi, but the courts abandoned us.”

Congo’s president, Felix Tshisekedi, promised that his government would make holding abusive officials to account a priority. He should act to provide justice for the family members of the operation’s victims.