(New York) – Protecting civilians should be a key priority for the US-led coalition and the Syrian Democratic Forces (SDF) as the Islamic State (also known as ISIS) makes its last territorial stand in Syria, Human Rights Watch said today, based on research in northern Syria and analysis of satellite imagery. Satellite-recorded video taken on the morning of February 20, 2019 shows hundreds of people walking along a small agricultural access road in the town of Baghuz near the Euphrates river.

The UN high commissioner for human rights had warned on February 19 that about 200 families remained trapped in the town and called for their safe passage out. On February 20, journalists saw some of these families evacuating the town. But the US-backed Syrian Democratic Forces spokesperson said that some civilians remain in the pocket of land.

“Civilians leaving Baghuz is a relief but it should not obscure the fact that this battle appears to have been waged without sufficient consideration to their wellbeing,” said Nadim Houry, terrorism/counterterrorism director at Human Rights Watch. “Just because they may be families of ISIS members or sympathized with them does not take away their protected status.”

Human Rights Watch interviewed more than 20 people who escaped the ISIS pocket in recent weeks. They described the Baghuz area being repeatedly shelled and subjected to air strikes, resulting in the town’s destruction. An analysis of satellite imagery revealed that the majority of buildings in Baghuz were destroyed during a one-month period between January 19 and February 20, a period during which large numbers of civilians were still present. Human Rights Watch identified over 630 major damage sites in Baghuz during this period, consistent with the detonation of large, air-dropped munitions.

The number of civilians killed in the fighting remains unknown. Many of those who escaped said that they buried people wherever they could. Satellite imagery recorded between January 26 and February 9 appeared to show ongoing mass burials on an empty plot of land next to the main road in the center of Baghuz. Human Rights Watch is not in a position to determine how many of those buried were civilians.

Journalists stationed near the Baghuz front lines told Human Rights Watch that they have observed a decrease in the number of airstrikes since February 14, but that shelling has continued to strike the pocket.

In addition to hundreds of US-led coalition airstrikes on the area, escapees described artillery attacks coming from territory controlled by the Syrian government, the US-backed Syrian Democratic Forces, and even from the Iraqi border, where Iraqi, French, and American artillery were based. French artillery is positioned at a forward operating base on the plateau of the Baghuz mountain in Iraq's western Anbar province opposite Syria's Deir Ezzor region, 10.5 kilometers east of Baghuz. The head of that unit told AFP earlier in February that his forces had fired 3,500 rounds on the Syrian front, which includes Baghuz.

“The scariest part was the shelling,” said a 42-year-old Iraqi man who managed to escape. “It came from all sides, including the Iraqi side. The field was strewn with bodies of people and we’d all stay flat on the ground, for hours on end, not moving while the shells flew from one direction to the other.” Human Rights Watch identified in satellite imagery hundreds of impact craters from heavy artillery fire within Baghuz between January 19 and February 19 consistent with this and other witness accounts.

Witnesses described harrowing conditions in the last months, with lack of food and aid forcing them to eat grass and weeds to survive, even as they moved multiple times to escape relentless attacks. As US-backed troops advanced on the area, large numbers of civilians retreated with ISIS along the Euphrates river to Baghuz, where they were encircled completely with the Baghuz mountains to the east and the river to the south. 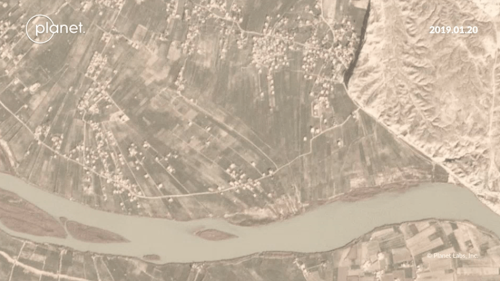 Satellite imagery recorded between January 26 and February 20 shows the movement of thousands of people toward the river as US-led coalition forces hit the built-up areas of Baghuz with air strikes and artillery fire. People who later escaped the area told Human Rights Watch that many of the people with them were relatives of ISIS members, but others were people who had been displaced multiple times in Iraq and Syria and had remained in ISIS controlled areas because they had no place else to go.

Most witnesses said that it was very dangerous to try to escape ISIS-controlled areas because the group punished people who tried to flee and had mined the roads. They said that smugglers were charging up to US$400 per person, which most of them no longer had.

Families slept in open fields for days, in temperatures that got very cold at night, and dug small trenches in the ground to protect themselves from the shelling and air strikes.

The coalition should choose means and methods of warfare to minimize incidental loss of civilian life, injury to civilians, and damage to civilian objects, including in their choice of weaponry in populated areas. The coalition should conduct thorough, prompt, and impartial investigations of the attacks resulting in civilian casualties, do everything feasible to prevent similar attacks, and provide compensation or condolence payments to people who suffered losses due to the coalition’s operations, Human Rights Watch said.

All parties to the conflict should facilitate access for aid groups to populations in need, and the international community should increase its efforts to assist those in need, Human Rights Watch said.

“In the air, we see the international coalition expend vast resources to defeat ISIS, but on the ground it has expended very little to protect children and other civilians caught up in its attacks,” Houry said. 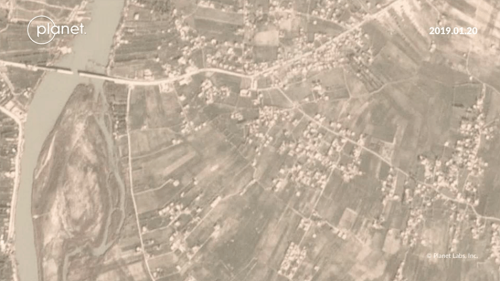 As the strikes intensified in January, thousands of people decided to leave the Baghuz area and made the arduous and dangerous journey out of ISIS-held areas by walking to the top of the Baghuz mountain and into SDF-controlled territory. Those with money paid smugglers to help transport them part of the way. Between December 4 and February 19, more than 31,000 people left the area.

A Syrian woman described the decision to leave:

There were strikes from all directions. It just became too dangerous. At one point, we gathered each other, we were in the hundreds, and we left Baghuz. We walked from 1 p.m. until 10 p.m. We were in a group of 12 families. We slept outside. I tore my dress to cover my child’s head.

“The planes were hitting people even as they escaped – we saw them one night, up on the mountain people trying to escape, women and children and then boom, boom – two rockets right on the mountain,” said an Iraqi man who was among those who escaped in January. His account was corroborated by others who were present, who also described shells falling as they walked to the top of the mountain.

Those who escaped the area faced new struggles. Upon arrival at the first SDF checkpoint, escapees were left out in the cold, in some cases for over a day, without SDF forces providing them with blankets or aid, only a little food, and without access to humanitarian agencies. The SDF then transported them from the checkpoint to al-Omar oil field, where SDF and US forces screened the people and provided them with some food, but still required them to sleep out in the open, before finally transporting them to al-Hol camp, a displacement camp six hour’s drive away that is controlled by the Kurdish-led authorities in al-Hasakeh governorate. Human Rights Watch interviewed the escapees in the camp. 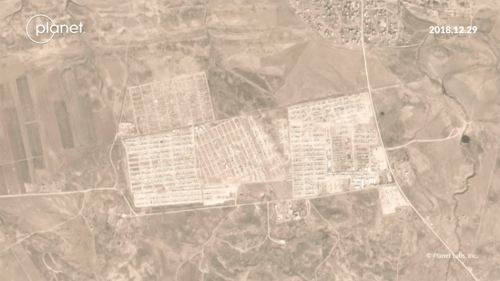 For weeks, transport to al-Hol was in open air trucks despite cold and rainy weather. Since December 4, at least 61 infants have died from hypothermia and malnutrition during the escape from Baghuz or shortly after arriving at the camp, according to the UN. Members of the Kurdish Red Crescent who were providing assistance to displaced civilians upon arrival confirmed that a number of infants died of hypothermia and malnutrition during the transfer.

While conditions have slightly improved since the start of the latest displacement, Human Rights Watch observed during multiday visits to al-Hol in mid-February that humanitarian needs of the displaced population remain high and that the camp administration lacks sufficient support.

Three women in the camp interviewed by Human Rights Watch said they had lost their infants on the way, citing lack of medical care. Two of the children died while in al-Hol due to malnutrition and insufficient access to health care.

Local camp authorities said that the UN and aid agencies had been slow in helping them cope with the large influx and had refused to set up camps closer to the front line. They gave as an example a 15-day delay in the UN delivering tents to the camp as it reportedly awaited approval from Damascus. The UN blames local authorities for not facilitating access.

Satellite Imagery Analysis of Airstrikes and Shelling over Baghuz

Human Rights Watch analysis of satellite imagery of Baghuz identified over 600 distinct impact sites consistent with the detonation of large, air-dropped munitions between January 19 and February 19. Munitions of this size can pose an excessive risk to civilians when used in populated areas, given their large blast and fragmentation radius. The coalition should cease using explosive weapons with wide area effects in populated areas.

International law says that parties to a conflict are required at all times to take all feasible precautions to avoid, and in any event to minimize, civilian casualties to the greatest extent possible. In case of doubt whether a person is a civilian, that person should be considered a civilian. Where civilians are present at the site of a military objective, coalition forces should only target the military objective and determine that the harm caused to civilians or civilian property by any planned attack would be proportional and not excessive in relation to the concrete and direct military advantage anticipated in the attack.