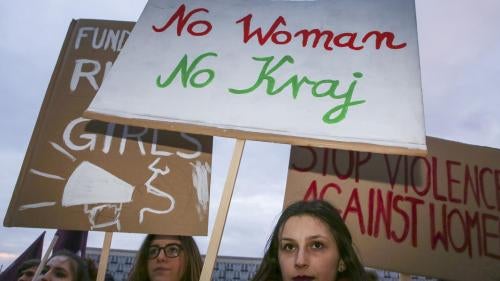 The 75-page report, “‘The Breath of the Government on My Back’: Attacks on Women’s Rights in Poland,” documents how, since coming to power in 2015, the Law and Justice government has targeted women’s rights groups through raids and defunding, often with little warning and no clear rationale. Human Rights Watch found that government agencies have dragged employees who support women’s rights protests or collaborate with women’s rights groups before disciplinary hearings and threatened their jobs. The government has failed to counter – and sometimes appeared to support – public smear campaigns by ruling party and other politicians and church-backed groups that mischaracterize women’s rights organizations and their work as dangerous to families and so-called “traditional values.”

“Using scare tactics to cripple these groups is just another attempt by the Polish government to roll back women’s rights,” said Hillary Margolis, a women’s rights researcher at Human Rights Watch. “Activists have targets on their backs simply for helping survivors of abuse or for supporting basic rights to reproductive health and peaceful protest.”

Human Rights Watch interviewed 30 activists, representatives of nongovernmental organizations, and participants in or supporters of women’s rights issues and protests across Poland, as well as government officials.

Inaccessibility of government funding has led organizations to cut staff, diminish geographic coverage, and reduce essential services for survivors of domestic and other gender-based violence, leaving significant gaps in shelter, counseling, and legal support, Human Rights Watch found. Groups conducting workshops on gender-based violence, non-discrimination, and sexual and reproductive health education have also been forced to cut back activities. Specialized services for women and girl survivors of violence and sexual and reproductive health education and information remain woefully inadequate, and well below international and regional standards. 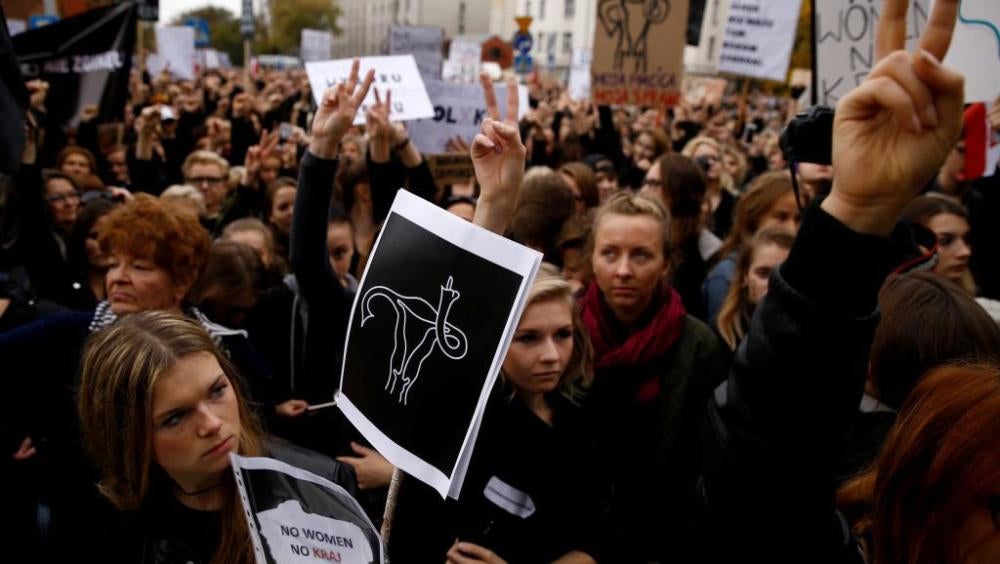 The Women’s Rights Center in Łódź, which provides support for women survivors of violence, was raided by police immediately following a women’s rights protest in October 2017 and faced withdrawal of significant government funding. Anna Głogowska-Balcerzak, the center’s coordinator, said they had to cut service provision drastically outside the city. “We had clients from all over the region,” she said. “Now we have only one support group in one small town.” She emphasized the impact on women facing abuse: “Some women stay with their abusive partners because they have nowhere else to go.”

Against a backdrop of historic reluctance in Poland to grant women and girls full reproductive rights, and with one of the most restrictive abortion laws in Europe, the government has worked to further curb reproductive freedom, including through retrogressive action on emergency contraception and support of bills that would virtually ban abortion. The government has blocked provision of comprehensive sexual and reproductive health education. High-level party leaders and civil servants have also publicly discouraged efforts to combat violence against women.

Such actions have met with widespread protest, including through mass demonstrations beginning in October 2016 that became known as #CzarnyProtest (Black Protest) and #StrajkKobiet (Women’s Strike).

The government’s open disdain for women’s rights and failure to counter misinformation campaigns has fostered a climate of fear among women’s human rights defenders. Activists said it also deters women and girls from seeking help, including survivors of violence.

Agata Teutsch, director of Autonomia Foundation, which conducts workshops in schools to counter gender-based violence and discrimination, said personal smears by conservative politicians and in the press have put her and the organization’s work at risk. “There were articles that mentioned me by name, that said I’m a dangerous person for kids,” she said. “For some communities or some people, [now] I’m someone not to cooperate with, I’m not someone you can trust.”

Some people interviewed experienced intimidation or retaliation due to their support for women’s rights, including participation in peaceful protests or cooperation with groups working on women’s rights. Five women said their public employment came under threat, including three teachers and one school headmistress who were subjected to disciplinary proceedings, though no grounds for disciplinary action were found.

The Polish government should immediately cease attacks on women’s rights defenders and organizations, and investigate and condemn abusive tactics used against them, Human Rights Watch said. It should halt attempts at retrogressive law and policy on women’s rights, including policies on sexual and reproductive health services and information, and stop undermining efforts to address violence against women.

The European Union (EU) and its member states should hold Poland to account for failing to implement EU policy on equality, women’s rights, and violence against women, including the Victims’ Rights Directive, Human Rights Watch said. They should also ensure access to funding for Polish women’s rights organizations.

“The Polish government is punishing not only the activists and organizations it targets, but the women who rely on them for lifesaving help,” Margolis said. “Allowing this to happen sends a dangerous message that women can’t count on the EU’s commitment to protect them.”