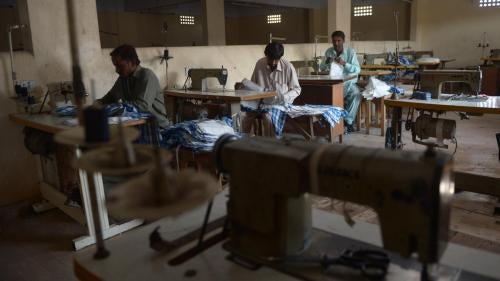 Human Rights Watch interviewed more than 140 people for the report, including 118 garment workers from 24 factories in Pakistan, as well as union leaders, government representatives, and labor rights advocates. Human Rights Watch conducted most of the field research for this report in Pakistan from June 2017 to December 2018.

In recent years, Pakistani garment workers have expressed serious grievances through strikes and protests. In December 2018, garment workers protested at a training institute in Lahore run by a major Pakistani brand, which they said abused a government incentive program. Workers alleged that the training institute actually operated as a factory, extracting free labor from “trainees.” In May 2017, workers protested after Khaadi, a leading Pakistani apparel brand, fired 32 workers for demanding their rights under Pakistani law.

In September 2012, a fire at the Ali Enterprises garment factory in Karachi killed at least 255 workers and injured more than 100. Investigations found a series of irregularities and an almost complete absence of fire and safety systems. Survivors reported that the management made no immediate efforts to rescue the workers and instead attempted to save their merchandise first.

Some of the larger factories in Pakistan, which are part of the organized sector of the industry, supply international apparel brands. But most garment factories in Pakistan cater to the domestic market, with the work carried out in small unregistered workshops in unmarked buildings that escape labor inspectors’ scrutiny.

The working conditions in these smaller factories are usually worse than those in larger ones that are more likely to be inspected, Human Rights Watch found. Owners often refuse to pay the statutory minimum wage and hire workers on short-term oral contracts. However, Human Rights Watch documented violations of labor rights including long working hours and extended temporary employment without job security or benefits even in large Pakistani factories, including some that supply garments to international retailers and brands.

Workers, many of them women, also said that they experienced verbal abuse, were pressured not to take toilet breaks, and were even denied clean drinking water. People demanding their rights could be threatened or fired. In two factories, Human Rights Watch documented beatings of workers by managers.

“I know that the payment is below the government minimum wage, but who will hear our complaint?” said a worker who earns about $90 a month after eight years. “If I protest to the manager, I will be fired in a heartbeat.”

Some garment factories producing for domestic brands use home-based workers for special orders or on a seasonal basis. Women working from home are often denied labor law protections. They are not able to join factory unions or unionize, and their work remains unregulated and vulnerable to middlemen, who often refuse to pay minimum wage.

Pakistan should amend its labor law to comply with international standards including International Labour Organization (ILO) conventions. In the interim, rigorous enforcement of the existing law would go a long way in protecting workers’ rights, Human Rights Watch said. Labor inspectors and other authorities are frequently overstretched, or complicit, and let abuses persist.

Under the United Nations Guiding Principles on Business and Human Rights, domestic and international apparel brands and factories supplying them have responsibilities to prevent and mitigate human rights abuses in factories and should take remedial action if abuses occur. All businesses, regardless of their size or where they are based, should “avoid causing or contributing to adverse human rights impacts through their own activities, and address such impacts when they occur,” the guiding principles say.

“The Pakistani government should ensure that garment factories stop using union-busting and other strategies to prevent workers from organizing and collectively demanding their rights,” Adams said. “Domestic and international brands should recognize that respecting worker rights makes for more competitive businesses.”

“There is no written contract and the only proof of employment is a card. The factory management marks the attendance of the workers themselves and signs everybody out after nine hours so that if the record is ever inspected, it would appear that the management is complying with the law. In truth, we work longer hours and there is not even sick leave. Salary is deducted if someone is unwell even for a day. There is no maternity leave. Any woman who becomes visibly pregnant is told to leave.”

–Shabana (pseudonym), who has been working for more than eight years at a Lahore garment factory with about 500 workers.

“I was fired last Sunday for not working overtime. I have not received a termination letter. On Monday, when I went to work, my name was listed with the security guard at the gate and he told me that I had been ‘gate stopped.’ Gate stopped is the most fearful term in the garment industry since it means that you have been fired and are no longer allowed to enter the factory.”

–Akbar (pseudonym), worker at a factory manufacturing for a domestic brand in Karachi.

“I have been working at this factory for the past eight years. My salary is around 9,000 Pakistani rupees [US$90] per month. I know that the payment is below the government minimum wage, but who will hear our complaint? If I protest to the manager, I will be fired in a heartbeat.”

–Rehana (pseudonym), worker at a factory supplying domestic and international brands in Karachi.

“We are allowed a lunch break for half an hour and two short bathroom breaks. If anyone asks for an additional bathroom break, the managers verbally abuse him and mock him for having a weak bladder. The only way to cope is to not drink water except during lunch.”

“There are 300 to 400 workers in the factory crammed in a small space. The factory is filthy, and the cleaning is done rarely. There is no clean drinking water in the factory. If any worker complains about feeling ill or nauseous, the managers give us a painkiller, deduct the cost of the medicine from our salary and tell us to get on with the work.”

–Kamran (pseudonym), worker at a factory in Lahore.

“There is no maternity leave. Pregnant women are ‘left’ [an industry term for termination] and now whenever a woman worker becomes pregnant, she leaves the job herself to avoid the indignity of being fired.”

–Fehmida (pseudonym), worker at a factory in Karachi.

Intimidation and Harassment of Independent Unions

“Union leaders have been harassed and intimidated multiple times. The management has used the local police to have fake [criminal] cases registered against union members and workers. I have been arrested, kept in a police lock-up, and tortured for calling a strike. Now any worker who is seen talking to a union leader is fired.”