Brazil is the world’s biggest pesticide market. Lax pesticide laws – in danger of becoming even looser – mean that toxic pesticides are sprayed near schools, indigenous communities, traditional Afro-Brazilian communities called quilombos, and rural communities, making people sick and endangering their long-term health. Richard Pearshouse, associate director of the Human Rights Watch environmental division, speaks with Amy Braunschweiger about the plight of rural communities, and why people are afraid to speak out against pesticide use.

The Failing Response to Pesticide Drift in Brazil’s Rural Communities

What’s happening with pesticides in Brazil?

Brazil’s an agriculture powerhouse in terms of the amount of land under farming. The farming of soy, sugarcane, cotton, and corn is done at an industrial scale and pesticides are used intensively. Also, dangerous pesticides are used. Yet there’s a lot of political support for the large farms and the pesticides they use.

Agriculture is a tremendous political force in Brazil. Many politicians are farmers. In Brazil they’re called the “rural caucus,” and they’re a very powerful political block. They try to weaken the laws around pesticides. 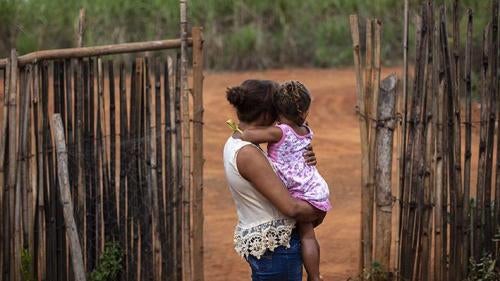 Are pesticides used in a dangerous way?

Across rural Brazil there’s a huge problem with pesticide drift. That’s when pesticides blow off the target crops onto nearby farms, communities, people. And it’s both ground spraying – the big tractor with the arms down each side and the nozzles down the arms – and airplanes that spray as they fly over.

With large industrial farming, fewer workers are in the fields.  We looked at who lived immediately beside these plantations – people in villages, rural schools, afro-Brazilian and indigenous communities – in seven sites across the country. Pesticides are sprayed right up to these areas and sometimes on top of them. If you live there, you can get sick. We found many cases of the acute poisoning that comes on while or immediately after pesticides are being sprayed. People vomit, feel nauseous, feel dizzy from the chemicals. Those are just the most immediate symptoms. Exposure week after week, month after month, can lead to serious health problems like cancer, infertility, negative impacts on children’s development.

We spoke with a woman who studied at a rural school at night, and she told us about coming to class and being overwhelmed by the fumes, even though the pesticides were sprayed a few hours earlier. She had to go outside and repeatedly vomited  and had to go home. Classes had to be canceled. The next day she was still nauseous from the pesticides. And all she did was go to night school. People like that, stories like that, they stay with you.

And Brazil is using pesticides banned in other countries?

When you look at the list of the top 10 pesticides used in Brazil by their active ingredient, 4 of the 10 are banned in the EU, and a fifth will be banned there by 2019.

Brazil’s existing law on pesticides is already quite loose. Yet it’s threatened by a bill that would reduce the health and environmental agencies’ authority in approving pesticides. The decision to approve would be driven only by the agricultural ministry.

So instead of health and environmental authorities revising the hazardous pesticides used in Brazil and working out which should be banned, these ministries are busy defending themselves against this new bill that would threaten their ability to do this job.

What’s the issue with how pesticides are applied?

About a quarter of all Brazil’s pesticides are sprayed from planes. There’s a lot of drift depending on the height of the plane and the wind. If you’re spraying from planes, and there are people or a school nearby, they can get hit.

This happened to me during my research. We were driving on a highway near a plantation, saw a plane spraying, and stopped the car and got out to take iPhone footage of the plane. And we got hit by pesticide spray on the side of the highway. The plane flew down, a few seconds passed, and then we felt the spray. We smelled it, and it started to sting, and we felt a burning sensation on our skin. We started feeling queasy, light-headed, a little nauseous. We washed off with bottled water in the car and drove to a town 30 minutes away and took a shower.

Shouldn’t there be a buffer zone between pesticide spray and people?

Under Brazilian regulation, you’re not allowed to aerial spray within 500 meters of a sensitive site like a school, forest, or waterway. But in practice, the rule is often ignored.

For ground spraying, there is no nationwide buffer zone. You can spray up to the school wall, and that’s legal. Yet you can still get massive amounts of pesticide drift from ground spraying.

In rural Brazil, plantations can start five meters from school classroom windows. These schools are single-story buildings, the window may have some glass, or may just be lattice wire, but the spray in the fields is absolutely going to drift into classrooms. And there are children inside at the time of spraying. And it’s a hot country, so people don’t keep windows closed, or they’re broken, or there aren’t any windows.

What surprised you in doing this research?

How many people didn’t want to talk to us. We would hear of problems in particular communities or schools and then make contact by phone. People would say, “We don’t want to talk about it, we don’t want you to come.” This happened time and again. They fear reprisals for speaking up. It’s a very sensitive issue between them and the large landowners nearby. I knew the pesticide issue was sensitive, but I hadn’t appreciated just how scared people were.

Is this fear justified?

A well-known pesticide activist in 2010 was shot dead in Brazil. He was a local farmer and had been instrumental in pushing the local municipality to ban aerial spraying. The public prosecutor, who believes he was killed for speaking out against aerial spraying and water contamination by pesticides, filed a case but no one has been tried for the killing.

In May 2013, an airplane flew over a school and about 90 children were sprayed and had to go to hospital. It was a national issue at the time. The teacher who took his students to hospital became an activist and was pushing for health care for these kids. He was threatened with death on a number of occasions. We talked to a priest who tried to organize against aerial spraying, and he started receiving pornography on his phone to intimidate him. We also spoke with a man who helped organize a petition on pesticides against a local farmer, and the farmer threatened him by making a gun gesture with his hands. The man reported that to the police but doesn’t know that there’s been any follow-up.

So, there is retaliation. Pesticides and agriculture issues aren’t just livelihoods, they’re a huge economic powerhouse. And when you come up against these forces, absolutely there’s pushback.

Did you speak to anyone else whose story moved you?

We talked to a young woman, in her early 20’s who was eight months pregnant with her first child. She told us that a month earlier she was at home when there was spraying on a nearby farm. There was this extraordinary smell of pesticides, and she started vomiting, she said. Her husband took her to the hospital, and she vomited all the way in the car. She gets to the hospital and they diagnosed her as having a virus – despite her telling them about the pesticides and the smell. When I saw her, she said she had never vomited during pregnancy until that day. And she was worried about her unborn child. Will he or she be OK?

Are medical professionals part of the problem?

Many people exposed to pesticides are misdiagnosed as having a virus, either intentionally or through poor training.

What happens to the health of people exposed to pesticides over the long term?

Cancer is one large concern, and a whole range of reproductive problems including infertility. Pesticides can have negative impacts on fetal development, and there’s also a range of developmental problems for kids.

What’s the impact on the environment?

You have contamination of waterways, which are often the source of drinking water for large towns in rural Brazil. But pesticide residues are turning up in drinking water and food around the country. Sometimes only trace amounts, but very, very few drinking water systems are actually testing the water for pesticides. The same for foodstuffs. And the quality of the little monitoring that does occur gives you cause for alarm.

What do we want to see?

A moratorium on aerial spraying until Brazil understands the health and environmental impacts that come from this. Enforced buffer zones, training for health staff, protection for people who speak up, water and food testing. More broadly, Brazil needs a national-level time-bound plan for reducing pesticide use. And perhaps most urgently, the current bill to further weaken Brazil’s pesticide law needs to be voted down. There’s a lot at stake.