While today’s headlines about Myanmar focus on crimes against humanity and the ethnic cleansing of hundreds of thousands of Rohingya Muslims, a story just as consequential and longer in the making has gone largely unreported. A new Human Rights Watch report describes the impact on small-scale farmers throughout the country whose land has been confiscated over the past 30 years by Myanmar’s government and military.

In cases in which the seizures ostensibly promoted economic development, the plans were carried out without consultation or concern for the impact on those affected. Farmers received little or no notice before their farms were taken and no or inadequate compensation, depriving them of their livelihood. While official statistics show the government has taken hundreds of thousands of acres since the early 1990s, local activists believe millions of acres have been seized.

The award-winning photographer Patrick Brown traveled with Human Rights Watch to Shan State and Ayeyarwady and Yangon Regions to document the effect of government “land grabs” on the people there. His work will be on display in Myanmar at the Pansuriya Gallery in downtown Yangon following the report’s release. He spoke to Human Rights Watch about what drew him to this project and what he’s working on in Myanmar now.

How much time have you spent in Myanmar? How did you become interested in the country?

I went to Thailand in 1999 and ended up in Chiang Mai, where I met Burmese dissidents. My first photo of Myanmar was taken over the Salween River. The mountains and the hills intrigued me, but I had no idea how much the people and the country would interest me. And it's been a large portion of my career for 20 years. I’ve been covering Rakhine State [in western Myanmar] for one year and before that, I was on the Thai-Myanmar border for five years. It’s been a big part of my life.

What drew you to this project?

This story [of land confiscations in Myanmar] doesn’t make headlines. It’s not the most obvious subject matter to document, which makes it intriguing for me. The people we met had no political alliances as such. They were people going on about their lives, much like people in Pittsburgh might. But there were people with power coming in and totally dismantling their livelihoods.

We spent the afternoon with a farmer and we went to his block of land where he had been cultivating rice. The government had taken his land and had therefore taken his income, his self-esteem, his capacity to provide for his family. He hadn't done anything wrong, but they wanted his land because it was fertile. It had a tremendous impact on him and his family.

How would you describe your work as a photographer?

I don't chase headlines as such. I’m not a news photographer. Once the headlines have dissipated from the front page or the World Wide Web, I like to stick around and find out what was happening and what it actually means for people. Sometimes that can take years. I like to slowly find out what the narrative is, not just listen for the soundbite.

Tell us about your current project.

I’m in the Rohingya camps in Cox’s Bazar [in Bangladesh]. I’ve been coming here since August 2017 to document the plight of the refugees and what it’s like to be stateless in a place with a population that would dwarf Liverpool or Copenhagen. I see this as the second phase for the Rohingya, after the initial exodus. At the moment the monsoon season is approaching, but the heavens haven't opened yet. One of the biggest cyclones to hit was in 1991 and that directly impacted Cox’s Bazar. The storm made 10 million people homeless and killed 130,000. At that time, there weren't hundreds of thousands of people living in bamboo and plastic shelters.

I’ve been revisiting people I met a year ago. I just visited a young boy who had his arm shot clean off from just between the elbow and the shoulder while he was escaping. His uncle cleaned his arm as best he could with a knife he sharpened on a river stone, and he knew which leaves had antiseptic qualities. It took him a month to walk out of the region where he was and to get to Bangladesh, and when he arrived, the wound was still open. The bone was still showing. I first met him at the hospital in Cox’s Bazar and he was getting a blood transfusion. I just saw him now. The idea is to come back and follow the people that I’ve made contact with. The camp has its own life. It changes, it evolves, it’s moving constantly.

The Rohingya crisis has been a major news story, but what do you think people who are following the crisis through news stories might be missing?

The sense of statelessness, which I can't even fully grasp. The consequences of not belonging to a state, I can't emphasize enough how demoralizing that can be. It leaves you– psychologically and physically – in a state of flux. They can’t get a job, they can’t farm, they can’t travel, they can’t go see a doctor outside the refugee camps. They don’t have any power. They’re stateless. They literally don’t exist on paper. And that’s very hard concept to grasp if you come from a society where before you’re born, you’re documented in some manner. It’s hard to portray that in imagery and in stories or to people who belong to a society where they are “documented.”

It’s such a hard angle to photograph, the sense of frustration. It’s man-made and totally preventable, and yet we have 900,000 people who are living in plastic and bamboo shelters. I don't think that comes through in some of the news reports. 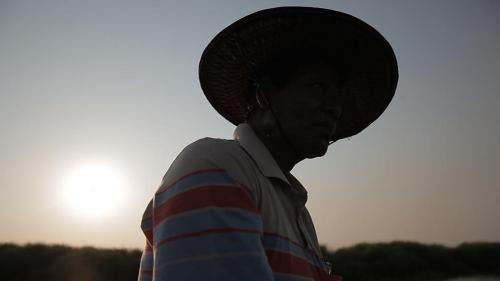 Can you describe what it’s like to be in the camps?

It’s awesome, but only in the sense that it actually takes your breath away. You see the size of it and it just goes on and on and on. Every day I go to a new part of the camp that I've never been to. There are no concrete buildings, no sewage system, no roads. It just keeps rolling. I walked 15 kilometers today and the landscape didn’t change.

What do you want to accomplish with your work?