The Polish government put another nail in the coffin of the country’s once-independent judiciary by forcing 27 Supreme Court judges – well over one-third of the court membership – out of their jobs last week in a blatant attempt to change the court’s political make-up. The streets are full of protesters. Even Mick Jagger is worried, speaking out against the move at a Rolling Stones gig in Warsaw this weekend.

So, what’s going on?

“Step by step, institution by institution.” That’s how Poland’s ombudsman, Adam Bodnar, described the government’s move to take over independent institutions in Poland since President Duda came to power in 2015. 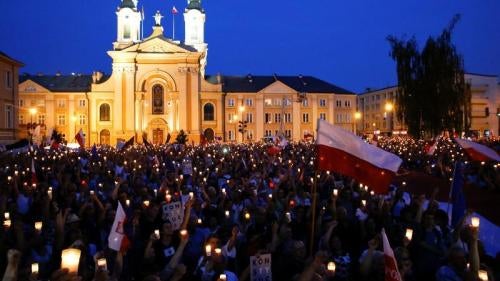 The courts have been a particular focus. Having already taken control of the body that appoints replacements, the government’s latest move was to lower the retirement age at the Supreme Court, to ensure that several judges had to quit. The result will be a court of judges loyal to the current ruling Law and Justice party (PiS).

First President of the Polish Supreme Court, Małgorzata Gersdorf, has refused to take this power grab lying down. Mindful that she and several of her Supreme Court colleagues were the last stronghold of an independent court system, she has bravely continued to go to work, cheered on by thousands of concerned Polish citizens.

This move to control Poland’s Supreme Court follows similar efforts by the government in 2016 to bring the country’s Constitutional Tribunal under its control, by removing several judges and replacing them with its own appointees. The government has since refused to implement rulings not favorable to its policies. Meanwhile, a July 2017 law on the common court system granted the Minister of Justice a six-month period to dismiss presidents of the local courts with little or no checks-and-balances. During that period, common court presidents and vice presidents in 149 of the country’s 300 courts were dismissed and replaced.

It’s unclear if this purge can be stopped.

In response to the crisis, the European Commission has rightly triggered its Article 7 mechanism that deals with EU members who put the union’s values at risk. But EU governments have yet reach to reach consensus on the next steps.

With the justice system gravely eroded, other human rights, like freedom of assembly, media freedom and women’s rights may be next in the firing line. The people of Poland will need even more support and solidarity from the rest of Europe in the months to come.