“We can’t ever go home again,” said one of the three young women, barely in their 20s, as they told their story and struggled to fight back their tears.

They looked to each other for support and protection as they sat in the small hotel outside the Ghanaian city of Kumasi, remembering how their whole lives were shattered in the space of a day, simply because they were suspected of being lesbians.

The women had travelled for two hours just to speak to Wendy Isaack, researcher in the Lesbian, Gay, Bisexual and Transgender (LGBT) rights program at Human Rights Watch. They hadn’t eaten for three days. LGBT people in Ghana are often rejected by their families and left to rely on handouts to survive. 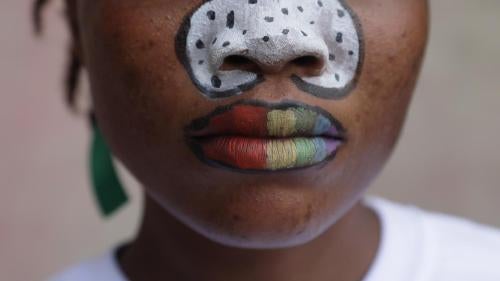 “I knew I would be buying food for many people,” Isaack said, adding that she bought the young women a pizza in the hotel restaurant, where they told her their story.

The women, all of whom had girlfriends in the city, had been living in a soccer training camp in Kumasi when one of their girlfriends started talking openly about their relationship.

Someone reported her to the police and within 24 hours the three teammates had been arrested, jeered at by a crowd, intimidated by police, kicked out of the camp, and rejected by their families. All for being suspected of homosexuality.

In Ghana, the government has yet to repeal a colonial-era law that criminalizes same-sex relations.

A new Human Rights Watch report, “‘No Choice but to Deny Who I Am’: Violence and Discrimination against LGBT People in Ghana,” looks at how the existence of this law – even though it’s rarely enforced – increases the chances that LGBT people will suffer violence and abuse.

While there are pockets of acceptance throughout Ghana, Kumasi – where most of the abuse cases Human Rights Watch documented took place – is less tolerant of homosexuality.

This lack of public acceptance is exacerbated by government officials who condemn homosexuality. In February 2017, Mike Ocquaye, the parliament speaker, referred to homosexuality as an “abomination” and in July he equated homosexuality with bestiality.

When Human Rights Watch’s Isaack arrived in Kumasi, fresh off a plane from the capital, Accra, 28 people were waiting at the tiny hotel to speak with her about the abuse they had suffered because of their sexuality. A local nongovernmental had told people to be there if they wanted their stories heard.

Many had been kicked out of their homes and had no means of supporting themselves.

Violence and Discrimination against LGBT People in Ghana

The three women stood out for Isaack because of how young they were, the way they stuck together, and because they brought back her own childhood memories of playing soccer in South Africa.

“I looked at them and I knew their dream had been taken away from them and they didn’t know what to do next,” Isaack said. “It broke my heart.”

It was the first case of an arbitrary arrest of women in Ghana that Isaack had encountered. The women were not found with their partners, but rather simply accused of being homosexual.

They were terrified as they told their story, recalling how three policemen had gone to the camp and taken them to a township police station.

By the time they got there, they said, word had spread that arrests had been made and about 100 people had gathered to jeer and shout insults at them as they were taken inside.

At this point in their account, Isaack said, the three became so upset they had to pause the interview.

“They were terrified. I could see in their faces that they were re-living it.”

The police yelled at the three women they detained, while the women tearfully denied all the accusations and pleaded to be released. After about three hours they were freed, but their dreams of being professional soccer players were shattered when they returned to the camp to find all their possessions boxed up.

The camp’s master had been told the reasons for their arrest and was kicking them out.

They decided to go home, but when each of them got there it, was clear their mothers had been speaking to each other. All three mothers told their daughters to leave.

Even several months on, one of the mothers is still spreading stories about her daughter and friends around the community. This means they can never go back to their old lives.

After being made homeless, the three teammates sought temporary refuge in a safe house, and since then have been moving from one friend’s house to another every few months.

“They move as a pack – they are all each other has,” Isaack said.

Not wanting to be a burden to anyone, and with no way of making a living, the three never stays too long in one place. They were attending school while they were living in the soccer camp, but now they have no way of finishing their education.

Sadly, the women’s story is not unique. The 114 LGBT people that Human Rights Watch interviewed in Ghana suffered violence at the hands of mobs and even by their own family members. The existence of the law criminalizing same-sex activity means many will not seek help from the police. Repealing the law would not only help the three soccer players, it could help anyone in Ghana whose life was shattered after someone accused them of being gay.