When I picked up the chain that had been tied around his ankle I could barely lift it. It felt like a pile of bricks and made a heavy thumping sound when I dropped it to the ground. It was here, at Nyakumasi Prayer Camp in central Ghana several years ago, where I first met “Solomon” (not his real name), a man in his 50s with a ragged blue cloth around his waist and a thick metal chain around his ankle. 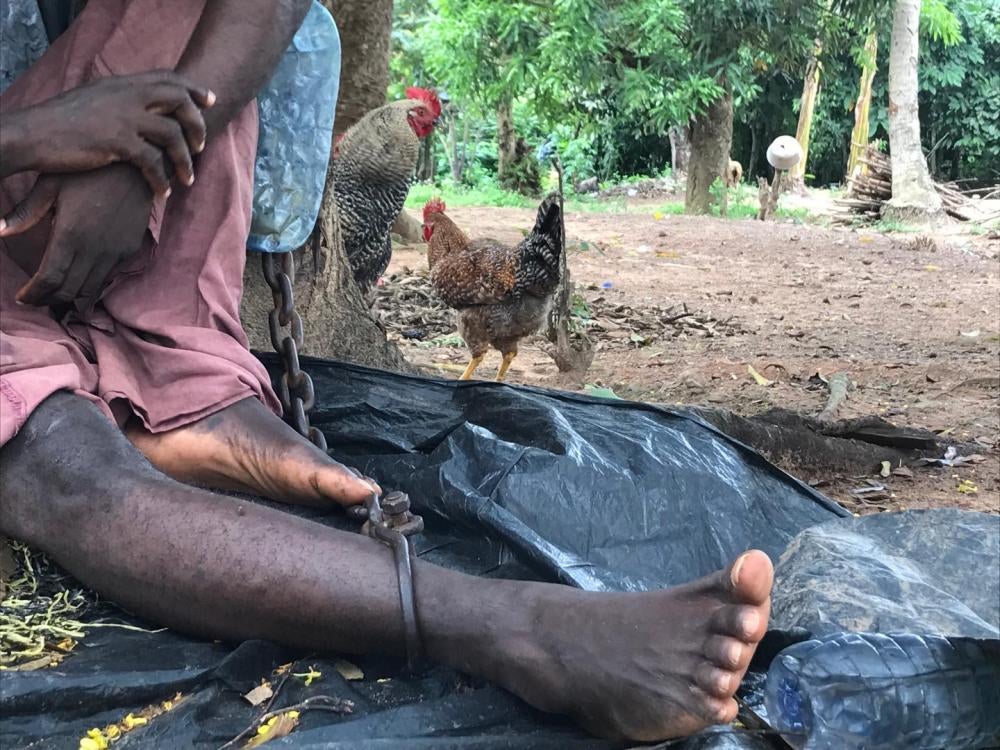 In Ghana people with mental health conditions are being shackled at home or or in prayer camps. Call on the government to help stop this!&#13;


Solomon’s parents had brought him to the camp because they thought he had a mental health condition. They – like many others – believed his disability was caused by a curse or demons, and brought him to the camp for spiritual healing. His ‘treatment’ consisted of regular prayers and a bit of medication, while being chained to the same spot – where he had to sleep, eat, and defecate – for nine-and-a-half long years. When I asked what he did all day, he replied: “Nothing.” He said he didn’t want to be there and wanted to be freed, but his pleas went unanswered.

In June, however, the Ghanaian government finally freed Solomon, along with 15 other people with real or perceived mental health conditions who were shackled in this camp, including two 12-year-old girls.

This week, I returned to Nyankumasi to see for myself. The sight of the shackles still lying beneath the trees was an eerie reminder of what was – and still is – a common practice. People in Ghana resort to shackling people with psychosocial disabilities because they see no alternative. There are not enough community mental health services to cope. And there is too much stigma and misunderstanding around mental health.

I also visited Ankaful Psychiatric Hospital, where Solomon and some of the others are now living. Solomon immediately recognized me and smiled. “Now I’m free,” he told me.

The head of Ghana’s Mental Health Authority announced that as of October 10, World Mental Health Day, the country’s ban on shackling – in place since 2012 – will finally be properly enforced. While progress at Nyankusami is important, it’s just one of many camps where people with mental health conditions are shackled. Much more needs to be done. We and other groups are now urging the government to invest in community mental health services, so other families won’t resort to chaining their loved ones.