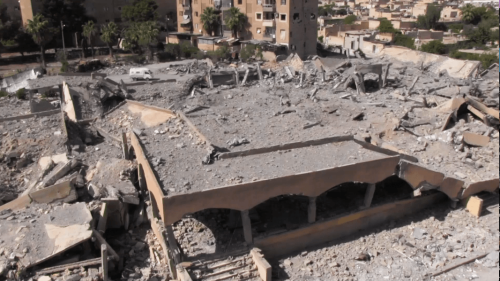 (Washington, DC) – Two aerial attacks near Raqqa, Syria in March killed at least 84 civilians, including 30 children, and raise concerns that US-led coalition forces fighting the extremist armed group Islamic State (also known as ISIS) did not take adequate precautions to minimize civilian casualties, Human Rights Watch said in a report released today. The conclusions are based on an on-the-ground investigation into the attacks.

The 42-page report, “All Feasible Precautions? Civilian Casualties in Anti-ISIS Coalition Airstrikes in Syria,” documents coalition attacks in March on a school housing displaced families in Mansourah and a market and a bakery in Tabqa, towns west of the city of Raqqa. Human Rights Watch found that ISIS fighters were at these sites, but so were dozens, perhaps hundreds, of civilians. The coalition should conduct thorough, prompt, and impartial investigations of the attacks, do everything feasible to prevent similar attacks, and provide compensation or condolence payments to people who suffered losses due to the coalition’s operations, Human Rights Watch said.

“These attacks killed dozens of civilians, including children, who had sought shelter in a school or were lining up buy bread at a bakery,” said Ole Solvang, deputy emergencies director at Human Rights Watch. “If coalition forces did not know that there were civilians at these sites, they need to take a long, hard look at the intelligence they are using to verify its targets because it clearly was not good enough.”

All of those interviewed said that while some ISIS members were at the sites, dozens of civilians were also there. Those interviewed said that the Mansourah school housed a large number of civilians, including many completely unaffiliated with ISIS, and that the Tabqa market, which included a bakery, overwhelmingly served civilians, many of whom were lined up at the bakery at the time of the attack.

The anti-ISIS coalition’s Combined Joint Task Force has acknowledged that it attacked Mansourah school, saying it targeted what it believed was an ISIS headquarters and weapons storage facility and that no civilians were present. While the task force says it is still assessing allegations that coalition aircraft killed dozens of civilians in the Tabqa market attack, the circumstances of the attack make it unlikely that anyone else was responsible.

International law says that parties to a conflict are required at all times to take all feasible precautions to avoid, and in any event to minimize, civilian casualties to the greatest extent possible. In case of doubt whether a person is a civilian, that person should be considered a civilian. Where civilians are present at the site of a military objective, coalition forces should determine that the harm caused to civilians or civilian property by any planned attack would be proportional and not excessive in relation to the concrete and direct military advantage anticipated in the attack.

If coalition forces knew about the civilian presence but decided to attack nonetheless, they may have violated the principle of proportionality.

These attacks are not unique. For example, on March 16, 2017, US aircraft struck a mosque near al-Jinah, west of Aleppo, killing dozens of people whom residents identified as civilians. The authority that approved the strikes did not know that the target was a mosque, according to a subsequent military investigation. The investigation, however, denied the presence of large numbers of civilians and only admitted that one civilian was probably killed.

In correspondence with Human Rights Watch, coalition forces said that there has been no change to the coalition’s rules of engagement or compliance with the law of armed conflict. But US Defense Secretary James Mattis said that US President Donald Trump has ordered the military to accelerate the campaign and to delegate the authority to approve strikes to a lower level; Mattis said this would allow it “to aggressively and in a timely manner move against enemy vulnerabilities.” The previous US administration made similar changes in December 2016.

In the absence of more details about these changes, it is difficult to assess their precise effects. However, the coalition needs at all times to ensure that delegating strike authority to a lower level to “more aggressively” attack the enemy does not reduce the extent or effectiveness of coalition forces’ precautions to minimize civilian harm.

The cases Human Rights Watch documented illustrate the limitations of coalition forces’ methodology for assessing whether coalition airstrikes injured or killed civilians. In the two cases for which the coalition had conducted assessments at the time of publication – the March 20 attack on the Mansourah school and an earlier attack near the Tabqa market in December – the coalition found that the allegations of civilian casualties were not credible. The information provided by coalition forces suggests that they did not visit the sites or interview residents and witnesses, even though partner forces had been in control of the area for weeks.

“If the coalition had visited the sites and talked to witnesses they would have found plenty of evidence that civilians were killed in these attacks,” Solvang said. “The coalition should follow our lead, conduct full investigations, and find ways to make its civilian casualty assessments more accurate.”