An epidemic of opioid-related overdoses has swept across United States and is intensifying. In 2015, more than 33,000 people died of overdose involving opioids, a 15 percent increase from the year before. A key to stopping these needless deaths is naloxone, a drug that is safe, cheap to make, and reverses overdoses. Senior Researcher Megan McLemore talks with Amy Braunschweiger about this life-saving drug and what we need to do to make sure anyone can affordably buy it.

How did this opioid epidemic start?

The factors contributing to it are numerous and complex. There was intense marketing of painkillers, like Oxycontin and Vicodin, by pharmaceutical companies, and weak regulation of prescriptions written by doctors and pain management clinics. Also, there are increasing rates of drug use in areas of the country beset by economic distress.

A substantial number of people dependent on opioids get their start through prescription drugs. That said, they often weren’t prescribed the drugs – kids used their parents’ pain medication, people gave it to friends, they were not necessarily the patient. Once they develop a dependence, people often move on to heroin, which is cheaper and easier to find. Heroin is often cut with other drugs, including super strong opioids like fentanyl. This means people have little information on what they’re injecting. You’re just not sure what effect it will have on you. And it’s killing people.

Tell me about Naloxone. How does it work?

It’s a miracle drug. It’s completely safe – almost like a saline solution. If I injected it into my arm right now, it would not affect me.

When you overdose on opioids, breathing stops or becomes severely limited. Naloxone goes to the part of the brain that controls respiratory arrest and gets people breathing again. 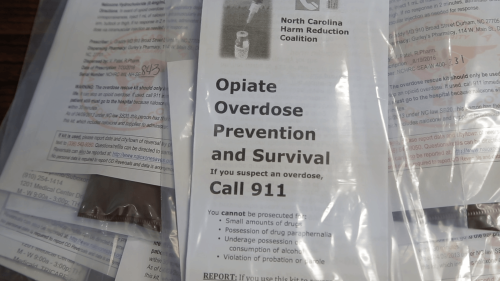 How hard is it to administer?

You need less than five minutes of training. There are three ways to administer it. The first is by syringe, where you stick the needle into someone’s butt or arm. The second method – and the most popular with police and EMTs [emergency responders] – is a nasal spray. The third is an auto-injector. It’s a little cartridge that actually tells you what to do. When you put it over their arm and push the blue button, it pricks them.

How widely available is it?

In the past several years, a lot has been done to get naloxone to the people who need it. Forty-six states passed laws allowing you to buy it at the pharmacy without an individual prescription, meaning anyone can get naloxone to save someone from overdose. Pharmaceutical companies made substantial donations to community and harm-reduction organizations. Its use by police has increased as well, and now 1,200 law enforcement agencies in towns and across the country carry it. Additionally, under the Obama administration – which made it a priority – Congress has passed a couple of bills funding naloxone distribution.

How much does it cost?

The price is a problem. In 2005, syringe kits cost less than US$1 each – even today they only cost pennies to make. But in 2008, around the same time the Center for Disease Control declared an opioid epidemic, drug companies added different formats and prices skyrocketed. The auto-injector costs thousands of dollars, no one can afford it. The syringe method is the cheapest, with each kit ranging from US$15 to US$75. As it stands, syringe kits are too expensive for community organizations to buy in bulk, and it can be challenging for law enforcement and public health agencies to afford too. The price of the nasal spray is US$75 for a package of two.

Naloxone has a 30-year track record and is so safe that we want it sold over the counter. It should be sold like Tylenol. We’d like drug companies to apply to the Food and Drug Administration and ask it to do this. That way, people dependent on opioids and anyone else – family members, for example – could buy it without seeing the pharmacist. If it were affordable and over the counter, it would be a game-changer for access to this life-saving medication.

While on the campaign trail, President Donald Trump promised to tackle high drug prices. We want Congress to explore ways to make naloxone more affordable as part of their overall effort to control medication pricing.

Are there any other problems around naloxone?

Too many states don’t allow syringe exchanges. In these states, it’s often legal to arrest people for possession of syringes and drug paraphernalia. But syringe exchanges are important, as they are an excellent place to distribute both naloxone and information on drug treatment. People who use drugs are mostly not going to pharmacies, doctors, or hospitals. The best way to reach them is to go directly to them, to literally meet them where they are.

The criminalization of drugs in the US also keeps people who overdosed from receiving naloxone. People who use drugs fear they will be arrested if they call 911 – even if their friends have overdosed and they know emergency responders carry naloxone. This costs lives. Many states have a “good Samaritan law,” which says if you call 911 when someone overdoses, you can’t be prosecuted for drug possession. But there are many exceptions to this law, and some states still do not have one.

What states need naloxone the most?

The states with the worst problems are responding well. But states with slightly fewer overdoses are lagging, with people dying unnecessarily. Kansas, for example, hasn’t passed the necessary laws to increase access to naloxone – no third-party prescriptions, no good Samaritan laws, and syringe exchange is illegal. We want to change this.

In many states, it’s the moms who are organizing, the ones who lost children to overdose. We made a video on naloxone and showed it at the National Harm Reduction conference in November 2016 in San Diego. So many moms, as well as people who started small organizations, asked to show the video to their communities. Our answer is always yes – we want people to see this video and get naloxone into all our communities.

What states can be upheld as a good example in fighting overdoses?

North Carolina. It changed its laws to have expanded syringe exchanges and allows people to buy naloxone at pharmacies. This has created a grass roots community effort to get naloxone to people. Since August 2013, the state has reversed more than 6,000 overdoses. That’s 6,000 lives in 3.5 years. They have distributed more than 38,000 kits in every part of the state, and naloxone is carried by 120 police departments in North Carolina.

By distributing naloxone, are you making overdoses more likely as users feel they have a safety net? Or even encouraging drug use?

There’s no evidence that naloxone increases overdoses at all. What it does is keeps you alive so you can have an opportunity to change your life and go into treatment when you’re ready. That’s the story of Kendra, a woman I interviewed. Naloxone saved her life a number of times. Today, she hasn’t used heroin for a couple years, has a baby, and is in nursing school.

Most of the volunteers I met who give out Naloxone with the North Carolina Harm Reduction Coalition were former heroin users. Their lives had gone down the tubes. Now they’re working, they’re students, they’re parents, and they’re spending a lot of time volunteering to save other people. These people are all part of families, communities, and towns.

The saddest part of this research was talking to parents whose kids died of an overdose. It’s such an unnecessary tragedy. I spoke with one woman who lost her son after he came home from a tour in Iraq. At one point, he was both volunteering with the Harm Reduction Coalition and trying to get off heroin. He relapsed, alone and without anyone to give him naloxone. His mother is just heartbroken. Now she tells her story to people who are wondering why it’s important to have naloxone available.

These deaths are devastating, and they can be prevented.

*This interview has been edited