The 88-page report, “‘It is my dream to leave this place’: Children with Disabilities in Serbian Institutions,” documents the pressure families face to send children born with disabilities to large residential institutions, often far away from their homes, separating them from their families. There, children may experience neglect, inappropriate medication, and lack of privacy and have limited or no access to education. 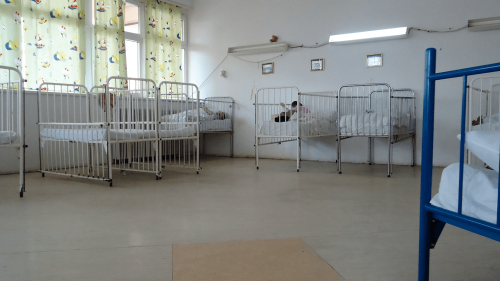 “Families shouldn’t have to face a false ultimatum, feeling that the only choice for their child is life in an institution,” said Emina Ćerimović, disability rights researcher at Human Rights Watch. “Long term placement of children with disabilities in institutions is rarely, if ever, in the child’s best interest.”

Human Rights Watch also documented the government’s failure to invest in community-based services so that families have the support they need to raise their children with disabilities at home and so that children can participate in their communities. Serbia has instead sunk millions of euros into building new institutions for people with disabilities or refurbishing old facilities.

Health professionals often advise parents to place a child with a disability in an institution, claiming it is the best option for their child. Lack of health care and support services such as day care or inclusive and quality schools in the community accessible to children with disabilities, poverty, stigma, and discrimination are key reasons why parents may feel that the only option is to place their child with a disability in an institution.

Ana, a single mother of a 12-year-old girl with intellectual and physical disabilities, said: “Not one single day care center wanted to accept her. They explained they found her too hyperactive. I’ve spent a year and half begging for an alternative...Three years ago, with no other option available, I placed her in an institution.”

Children with certain disabilities, typically those who cannot walk and talk, are segregated in special wards, where they spend their days lying down, with minimal interaction with others.  Many are rarely given the opportunity to go outside, access education, or play with other children.

Most adults with disabilities living in Serbian institutions are also deprived of legal capacity, or the right to make decisions about basic rights. They are placed under guardianship – often nominated by the state – who make all decisions for them. For example, Human Rights Watch documented cases in which young women with disabilities deprived of legal capacity were subjected to invasive medical interventions, including termination of pregnancy, on the consent of the guardian, but without their own free and informed consent.

“Institutionalization of babies can harm their health and social and emotional behavior, with long-lasting effects on their future life chances,” said Ćerimović.
Serbia is party to a number of human rights treaties, including the Convention on the Rights of Persons with Disabilities, the Convention on the Rights of the Child, the Convention Against All Forms of Torture and the European Convention on Human Rights (ECHR). Under these treaties, Serbia is obliged to protect the rights of children with disabilities and ensure their full participation in society. This includes ensuring that no child is separated from his or her family because of a disability.

Serbia is also a candidate for European Union (EU) membership. Under the Stabilization and Association Agreement, a key step toward EU accession, Serbia is expected to gradually bring its laws into conformity with those of the EU, including with respect to the treatment of people with disabilities. In the latest progress report on Serbia, the European Commission has taken a strong stance on Serbia’s problematic treatment of children with disabilities in institutions and has urged authorities to prevent placement in institutional care.

The Serbian government should immediately take steps to end neglect, isolation, segregation, and inappropriate psychiatric treatments and discrimination against children with disabilities in Serbian institutions and to provide community support services, Human Rights Watch said. Where it is not possible to return children to their birth families, for example in cases of abuse and neglect, children should have an opportunity to live in a family environment, with relatives, foster families or adoptive parents.

“With Serbia firmly on the path to full EU membership, the European Union should ensure Serbia puts an end to routinely placing children with disabilities behind institutional walls,” Ćerimović said. “A child should not be isolated from his or her family or community or denied the chance to be a child, because they have a disability.”