(Beirut) – Houthi forces and allied forces loyal to the country’s former president have repeatedly fired mortar shells and artillery rockets indiscriminately into populated neighborhoods in the southern Yemeni city of Taizz. The attacks violate the laws of war. 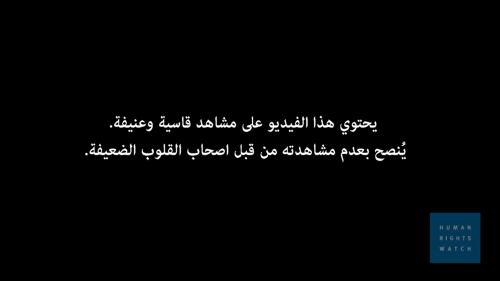 In addition, since October 2015, the Houthis, also known as Ansar Allah, have unlawfully confiscated food and medical supplies from civilians in the city. The pro-Houthi forces should take all possible steps to minimize harm to civilians, end the unlawful confiscation of essential goods from civilians, and hold accountable commanders responsible for unlawful attacks.

“Pro-Houthi forces have been shelling Taizz without regard for the safety of its residents,” said Joe Stork, deputy Middle East director. “The Houthis should stop firing heavy explosive weapons into populated areas of the city.”

Human Rights Watch documented three attacks on Taizz in August 2015 by Houthi forces supported by military forces loyal to former President Ali Abdullah Saleh that killed at least 14 civilians, including 5 women and 5 children. In the second half of August, Houthi shelling and sniper attacks on civilian neighborhoods in Taizz killed at least 42 civilians, the United Nations Office of the High Commissioner for Human Rights reported. Residents told Human Rights Watch that the attacks have continued.

In September, Human Rights Watch visited three neighborhoods in Taizz partially controlled by armed “local popular committees” opposed to the Houthis who had come under fire from Houthi rockets and mortars since March. Local residents as well as military experts said that these committees have firearms but no mortar or rocket capabilities. Human Rights Watch also reviewed photographs and video of the attacks and their aftermath.

Human Rights Watch investigations of impact sites and weapons remnants found that artillery rockets had been used, including one apparent Grad rocket, and mortar rounds with blast and fragmentation effects that can cause injuries and damage over a wide area. These weapons, in particular unguided rockets, are difficult to target with accuracy, and when directed toward populated areas are indiscriminate. Indiscriminate attacks violate the laws of war and amount to war crimes when carried out deliberately or recklessly.

Human Rights Watch previously documented Houthi use of unguided artillery rockets against populated areas in Saudi Arabia and in the southern Yemen port city of Aden.

Pro-Houthi forces attacked the Taizz neighborhoods repeatedly over many weeks, the UN Office of the High Commissioner for Human Rights and a Taizz-based human rights activist reported. The reports exclude the possibility of occasional or one-time misdirected fire. The location of impact marks on buildings indicated that the munitions had come from the direction and within range of al-Hawban district, the area of Taizz that has been under Houthi control.

The activist, who has been documenting civilian casualties from attacks by all parties, told Human Rights Watch that from late March until October, Houthi forces deployed on an elevated area in the northeast al-Hawban district fired into the city center, nominally controlled by the local popular committees. Buildings in much of central Taizz were peppered with fragmentation marks only on their northeast facing walls, Human Rights Watch said.

In two of the most deadly attacks, shelling by pro-Houthi forces killed 5 civilians and wounded 38 in the Wadi al-Madam neighborhood on August 13, and killed 10 civilians and wounded 38 in the Osiefra neighborhood on August 20, the activist said. Human Rights Watch was unable to interview the victims of those two attacks because of lack of cell phone reception.

Residents from the attacked neighborhoods that were interviewed by Human Rights Watch said that no Local Popular Committee forces were holding positions in those neighborhoods at the time of the attacks and that more generally these fighters had not used residential neighborhoods to launch attacks against the Houthis. During its visit, Human Rights Watch saw no evidence of military installations or other military objectives that would constitute legitimate targets. For example, one attack on August 23 hit near a group of boys playing football, killing three of them and one boy’s father, who was watching them, but witnesses said there were no military installations or forces in the area.

Since early October, pro-Houthi forces at checkpoints have confiscated water, food, and cooking gas that civilians try to bring into non-Houthi controlled neighborhoods. Sadeq Shujaa, the secretary general of the Doctors and Pharmacists Syndicate branch in Taizz, told Human Rights Watch that the Houthi restrictions began in September but have become increasingly draconian. Those who have complained directly to Houthi commanders have reportedly been told to “Ask the Resistance to feed you.”

In a recent incident, the Houthis confiscated drugs from three trucks that were sent by the World Health Organization to Taizz. The Houthis took the drugs that were intended for hospitals in areas not under Houthi control. They have not given the Health Ministry offices in Sanaa and Taizz the authorization to provide hospitals and clinics in non-Houthi-controlled areas with medical support.

International humanitarian law – the laws of war – which governs the hostilities in Yemen, prohibits indiscriminate attacks which strike military objectives and civilians or civilian objects without distinction. The laws of war require military commanders to choose a means of attack that can be directed at military targets and will minimize incidental harm to civilians. Weapons that are so inaccurate that they cannot be directed at military targets without imposing a substantial risk of civilian harm should not be deployed in populated areas. Forces deployed in populated areas must avoid locating military objectives near densely populated areas and try to remove civilians from the vicinity of military activities.

The laws of war do not prohibit sieges of enemy forces. However, starvation of civilians as a method of warfare is prohibited, as is confiscating or destroying objects that are indispensable to the survival of the population.

“Houthi leaders should realize that they could someday face war crimes trials for ordering or taking part in indiscriminate rocket and mortar attacks on civilian neighborhoods,” Stork said.

August 11 Attack on al-Shamasi Neighborhood
Ali al-Abudee, 40, an al-Shamasi resident, told Human Rights Watch that on August 11 between 9 and 10 p.m. his next-door neighbor Ali Bin Ali al-Shouba, 55, was sitting outside the entrance to his own house when a munition hit the street and exploded, sending a metal fragment into al-Shouba’s throat, killing him. The explosion also damaged al-Shouba’s home and car. Al-Abudee found a remnant of the weapon used. He described a tail with a small fan-like shape consistent with that of a remnant of a mortar round.

Al-Shouba’s son, Nawfal Ali Bin Ali al-Shouba, 32, who was in front of the house with his father at the time of the attack, said that no one else was hurt in the attack. He told Human Rights Watch in a telephone interview that he saved the tailfin: “I kept it with me so that it can be used one day to condemn the criminals who are firing these kinds of weapons indiscriminately into the middle of residential areas without any reason.” Both al-Abudee and al-Shouba said that at the time there was were no fighters or military vehicles in the area.

August 23 Attack on al-Kawthar Neighborhood
Pro-Houthi forces fired a projectile into al-Kawthar neighborhood in the al-Qahera district in central Taizz, on the afternoon of August 23, local residents told Human Rights Watch. The explosion killed four people, including three children, and damaged the walls of several homes in the area. Human Rights Watch visited the site of the attack on September 3 and saw damage that was consistent with the witness testimony.

The brother of a neighborhood resident, Muhammad Ali Ajamiya, 35, told Human Rights Watch that since March residents have found themselves caught between the Local Popular Committee fighters and pro-Houthi forces, with the groups encamped on opposite sides of the neighborhood. As a result the area has come under fire from the pro-Houthi forces since March, with heavy fire starting in April.

Ajamiya said that on August 23 fighting had lessened. His sister Reem Ali Muhammad Ajamiya, who also lived in the neighborhood, told him over the phone that boys living in the neighborhood were playing football outside because it was quiet. Salah Noman, 40, another resident, said that at least 10 children were playing when at about 5:15 p.m., a munition flew over the east wall of his neighbor, Fateh al-Hakimi, hitting the ground floor of al-Hakimi’s house and exploding. The boys were playing on the street right outside of al-Hakimi’s home and metal fragments from the attack hit some of the children, as well as some neighbors standing in the street at the time. “It was very scary,” Noman said.

One moment the kids were playing, the next moment we saw the same kids’ dead bodies covered with blood. Later we discovered that on that day there had been five or six other shells that landed in the neighborhood but thank God no one was killed or wounded in those. But that is how we could tell that these attacks were indiscriminately hitting this neighborhood.

Noman told Human Rights Watch that there were no fighters in the area, nor were there any vehicles passing by on the road at the time of the strike. He said he did not find any remnants of the munition that would help to identify the weapon used in the attack.

August 23 Attack on Deluxe Neighborhood
On August 23 at about 9:30 p.m., an explosion rocked the Deluxe neighborhood in western Taizz. The explosion killed nine people, including five women and two girls, and partially destroyed one house. Anas Farooq al-Ariqi, the head of the local Youth Development Organization, who was living in the area at the time, told Human Rights Watch:

We were sitting at dinner with our family when I heard my daughter Lin, who is seven years old, scream. Then we heard a loud bang and suddenly the house was covered in dust and it was hard to see clearly. I rushed to the bedroom to grab my one-year-old daughter Oumayma, and we went downstairs to hide under the stairs.

A few minutes later I dared to go outside to try to figure out what had happened. I heard screams everywhere and there was bright light and heat that was blurring my vision from fires burning around me. It was then that I realized that my wife’s relatives’ house, which was next door, had been hit.

Human Rights Watch visited the site of the explosion on September 3. The munition had hit the wall from the north side, destroying both the north and the west walls. The first floor of the building was partially damaged while the ground floor remained largely undamaged. Al-Ariqi said the remnants that he saw looked like burst pipes and the small metal fragments were the size of a small stone. This is consistent with the description of the remnant of a Grad rocket. Human Rights Watch was not able to conclude the type of rocket used in the attack.

Al-Ariqi and his wife, Raja Abd al-Khalek al-Qadasi, told Human Rights Watch that they had moved to this neighborhood from al-Kawthar in Taizz after an explosion near their home on July 4 wounded their friend Abd al-Salam Asakra and his daughter Maha, 17.