(Nairobi) – Mobs in Kenya’s coastal region have repeatedly attacked people based on their sexual orientation and gender identity, PEMA Kenya and Human Rights Watch said in a report released today. In at least six incidents between 2008 and 2015, mobs in the coastal counties of Mombasa, Kwale, and Kilifi have attacked or threatened lesbian, gay, bisexual, and transgender (LGBT) people or health workers serving the LGBT community, without sufficient response from authorities.

The 70-page report, “The Issue is Violence: Attacks on LGBT People on Kenya’s Coast,” is based on research conducted in 2014 and 2015 by Human Rights Watch and PEMA Kenya, a community organization in Mombasa that provides support to gender and sexual minorities on human rights, health, HIV/AIDS, and economic well-being. The groups documented rights abuses against members of sexual minorities in Kenya’s coast region, including mob violence, assault, rape, incitement to violence, and inadequate protection. The groups identified ways the Kenyan authorities could improve their response to these abuses.

“For many LGBT people in the coast region, safety is a daily concern,” said Esther Adhiambo, executive director of PEMA Kenya. “While police treatment of LGBT people has improved in recent years, discrimination remains a major problem. LGBT peoples’ justified fear of reporting hate crimes to the police means that violence continues with impunity.”

The authorities’ response to mob attacks and other forms of anti-gay violence has been limited. Officials rarely condemn the attacks. Police, even in the few instances in which they provide protection to victims, have not arrested anyone for participating in or inciting these attacks.

Many victims do not file complaints with police, believing that the police will not help them or, worse, might arrest them instead. In several cases, LGBT people who did attempt to file complaints met with discriminatory treatment by the police, who mocked or harassed them or refused to take statements.

Kenyan law provides for a sentence of up to 14 years in prison for so-called carnal knowledge against the order of nature. Although prosecutions for same-sex conduct are rare in Kenya, police in Kwale County arrested two men in February 2015 solely on the basis of rumors, subjecting them to humiliating anal examinations in a deeply misguided attempt to “prove” their sexual orientation. The arrests took place in the context of an anti-gay witch hunt by Kwale County residents. At least two men were physically attacked during that period, both slashed with broken bottles, in what appear to be homophobic hate crimes. They told Human Rights Watch and PEMA they were afraid that if they reported the incidents to the police, they would be arrested.

Unchecked violence on the basis of sexual orientation and gender identity not only constitutes a serious human rights abuse, it also jeopardizes Kenya’s efforts to address an HIV epidemic that is highly concentrated among vulnerable populations, including transgender women and men who have sex with men (MSM), the organizations said. In three of the mob attacks, violence or threats from residents and local religious leaders caused health providers serving MSM to temporarily or permanently close their doors or shut down workshops. Anti-gay attacks in Kwale in February led dozens to flee the region or stay in their houses for weeks, leading to a notable decline in participation in HIV-prevention activities at a Mombasa-based health center. 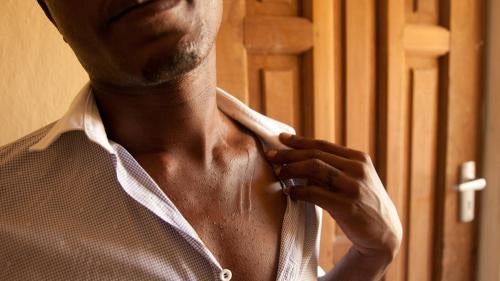 UNAIDS has called for decriminalizing same-sex conduct, pointing out that criminalization drives vulnerable groups underground and away from essential HIV-prevention and treatment services.
Civil society organizations in Kenya’s coast, including PEMA Kenya, have undertaken initiatives to train police officers, healthcare providers, and religious leaders on sexual orientation and gender identity issues, and on the importance of nondiscrimination in providing services. These initiatives have gradually improved the climate in which LGBT people live at the coast, but civil society groups argue that this should not be their responsibility alone – the government should also play a role in ending homophobic and transphobic violence and discrimination.

“President Kenyatta recently described gay rights in Kenya as a ‘non-issue,’” said Lorna Dias, executive coordinator of the Gay and Lesbian Coalition of Kenya, an umbrella organization of which PEMA Kenya is a member. “Our response is that being gay or lesbian is a non-issue, but being harmed because of who you are is a serious issue. And the government can’t abdicate its responsibility to address violence against our communities.”

The African Commission on Human and Peoples’ Rights passed its groundbreaking resolution 275 in 2014, calling on governments to prevent and punish all forms of violence targeting people on the basis of their real or imputed sexual orientation or gender identity.

“While some Kenyan leaders have attempted to paint homosexuality as ‘un-African,’ the African Commission resolution cements what many African human rights advocates have long said – that it is violence and exclusion that are un-African,” said Daniel Bekele, Africa director at Human Rights Watch. “Kenya should uphold this resolution and protect, rather than persecute, sexual and gender minorities, at the coast and wherever anti-LGBT violence exists.”