(Washington, DC) – The Obama administration should conclude its years-long review of US policy on antipersonnel landmines with a decision to ban the weapon and join the international ban treaty, Human Rights Watch said today, on the eve of the International Day for Mine Action.

“It is nonsensical that the US has spent billions of dollars to clean up the mess caused by landmines, but insists on the right to use them again in the future,” said Steve Goose, arms director at Human Rights Watch. “Throwing money at the problem is not enough. A permanent solution is needed and the Mine Ban Treaty provides it.”

The United States is not among the 161 nations that have signed the 1997 Mine Ban Treaty, which comprehensively bans antipersonnel landmines and requires their clearance and assistance to victims. The Clinton administration in 1997 set the objective of joining the treaty in 2006, but the Bush administration reversed course in 2004. 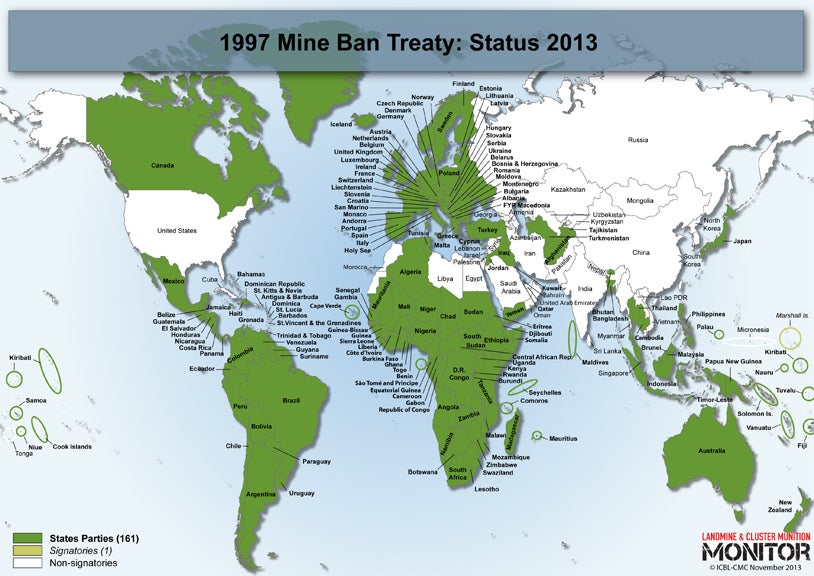 At a Mine Ban Treaty meeting in Geneva in December 2013, the US announced that the policy review initiated in 2009 is “pressing forward to a conclusion” but gave no indication of when it would announce its decision.

In a March 28, 2014 letter, Human Rights Watch urged US President Barack Obama to announce the results of the US landmine policy review by the time of the Mine Ban Treaty’s Third Review Conference, which opens in Maputo, Mozambique on June 23.

Since the Mine Ban Treaty came into force on March 1, 1999, more than 47 million stockpiled antipersonnel mines have been destroyed, 27 countries have completed mine clearance to become mine-free, and the annual number of casualties from landmines and explosive remnants of war has decreased dramatically.

Globally, use of antipersonnel mines is now rare. In recent years, the only government forces laying new mines have been Syria, Burma, and Libya under Muammar Qaddafi. None of these countries have joined the treaty.

The US is the world’s largest contributor to global mine clearance and victim assistance programs. According to the Landmine Monitor initiative by the International Campaign to Ban Landmines (ICBL), the US provided more than US$2 billion to these programs from 1993 to 2013. In 2012, the US contributed US$134.4 million for 30 countries and three territories through more than 40 organizations. Afghanistan and Iraq received the largest contributions, accounting for 48 percent of US mine action funding in 2012.

Human Rights Watch is a founding member of the International Campaign to Ban Landmines, which received the 1997 Nobel Peace Prize, together with its coordinator, Jody Williams, for its efforts to bring about the Mine Ban Treaty and for its contributions to a new international diplomacy based on humanitarian imperatives.

In 2005, the United Nations General Assembly declared that April 4 of each year would be observed as the International Day for Mine Awareness and Assistance in Mine Action. To mark 2014 Mine Action Day, events are planned at the United Nations in New York, at the US Capitol in Washington, DC, and in nations around the world.