(New York) – New satellite imagery and eyewitness accounts reveal that the bombardment of the Baba Amr neighborhood in Homs has inflicted widespread destruction and a large number of deaths and severe injuries of civilians, Human Rights Watch said today. The bombardment has severely restricted movement and relief efforts and deprived thousands of civilians of the ability to access the most basic commodities, Human Rights Watch said.

Local sources have reported that approximately 700 civilians have been killed and thousands wounded in Homs since the Syrian military began its current assault on the city on February 3, 2012. Indiscriminate shelling and sniper fire has caused most of the casualties in Baba Amr, which is a residential area where elements of the armed opposition have sought refuge. Human Rights Watch interviewed 15 Homs residents who escaped the city in the last two weeks, as well as two foreign correspondents who spent time in Baba Amr during the military assault.

“These new satellite photos and witness accounts show the extent of the brutality unleashed on Baba Amr," said Sarah Leah Whitson, Middle East director at Human Rights Watch. “Despite the killing, Russia and China continue to block any international action.”

Human Rights Watch acquired and analyzed this commercial satellite image of the Baba Amr neighborhood of Homs on February 25. A wide view of the image clearly shows the extensive damage caused by the use of surface-delivered explosive weapons in a populated area. The image reflects the damage that has occurred since previous images were taken between four and six weeks ago. 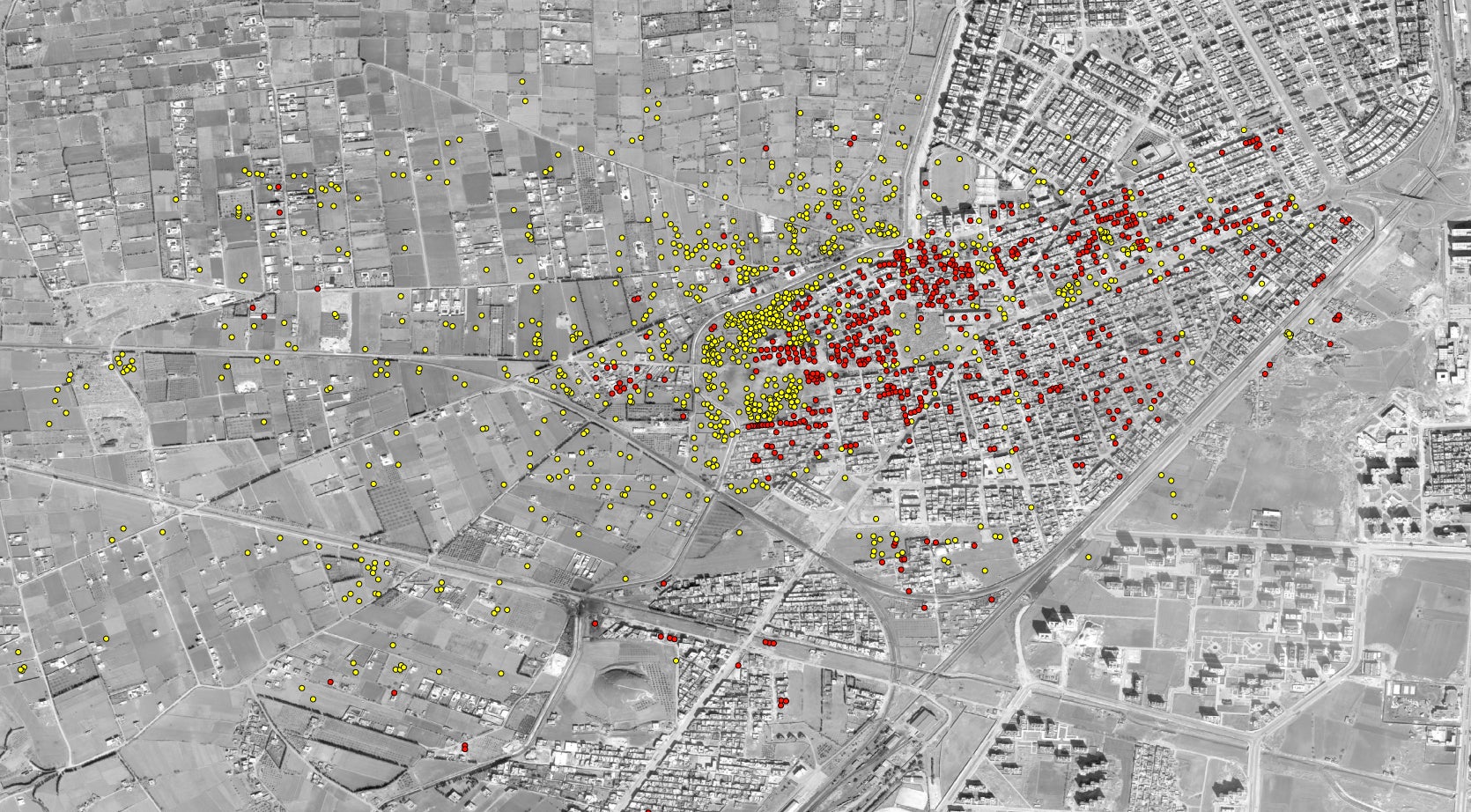 Analysts have overlaid the large-scale image of Baba Amr with symbols to highlight certain features:

-       Yellow circles are impact craters in open areas like fields, or roads.

At least 950 craters are visible on open lands, such as roads and farmland, from the impact of indirect fire weapons. The number of craters indicates the frequency of the attacks and how many artillery and mortar shells have fallen. There are 640 buildings in the neighborhood with visible damage. However, the damage to buildings is likely to be significantly underestimated from viewing the satellite image because views from satellite images do not show hits to the sides of buildings made by explosive weapons.

A Western journalist described a makeshift field hospital in Baba Amr that she visited on February 6:

It was one room and a hallway. There were three people whose bodies had been pulverized as a result of the shelling. A dozen wounded were there but there were no doctors; only two nurses who were trying to help the wounded. They would call for help and relatives of the wounded would try to help them. They could only help two persons at a time.

Baba Amr has been an opposition stronghold since the start of protests against the Syrian government. Throughout the past year, security forces have conducted multiple raids on the neighborhood to arrest activists and protesters. Human Rights Watch has also documented attacks by armed opposition forces on security forces in the area, including at checkpoints. Since the shelling began at the beginning of February, there have also been media reports of exchanges of fire between the armed opposition, whichwitnesses say has access to small arms and light weapons, and Syrian government forces.

The presence or activity of armed opposition forces in Baba Amr, however, in no way justifies the scale and nature of the attack on the residential area that is reflected by the satellite imagery and the accounts from witnesses obtained by Human Rights Watch. It also does not excuse the Syrian government’s refusal to coordinate safe passage for civilians in Baba Amr seeking to leave the area.

According to Western journalists and local residents who recently escaped Baba Amr to neighboring countries, a few thousand residents remain trapped in the neighborhood, which has had no running water or electricity for two weeks.

All witnesses interviewed by Human Rights Watch described shelling that would start every day at around 6:30 a.m. and that did not begin to let up until sunset. The shelling would continue during the night, but with less frequency, the witnesses reported. One foreign journalist told Human Rights Watch that she counted 200 explosions in two hours on February 6. Another journalist counted 55 explosions in 15 minutes on February 16. A local resident who volunteered to help collect and transport the wounded said that shells would often hit the same spot twice, three to five minutes apart.

Close ups of the satellite image obtained by Human Rights Watch show tanks and other armored vehicles positioned on a secondary road to Aysoon, just west of Baba Amr, and confirm the presence of tanks, infantry fighting vehicles, and other military vehicles at the main roundabout at the northwest entry point of the city. Two tanks are shown advancing down the road, to the south, toward Baba Amr. 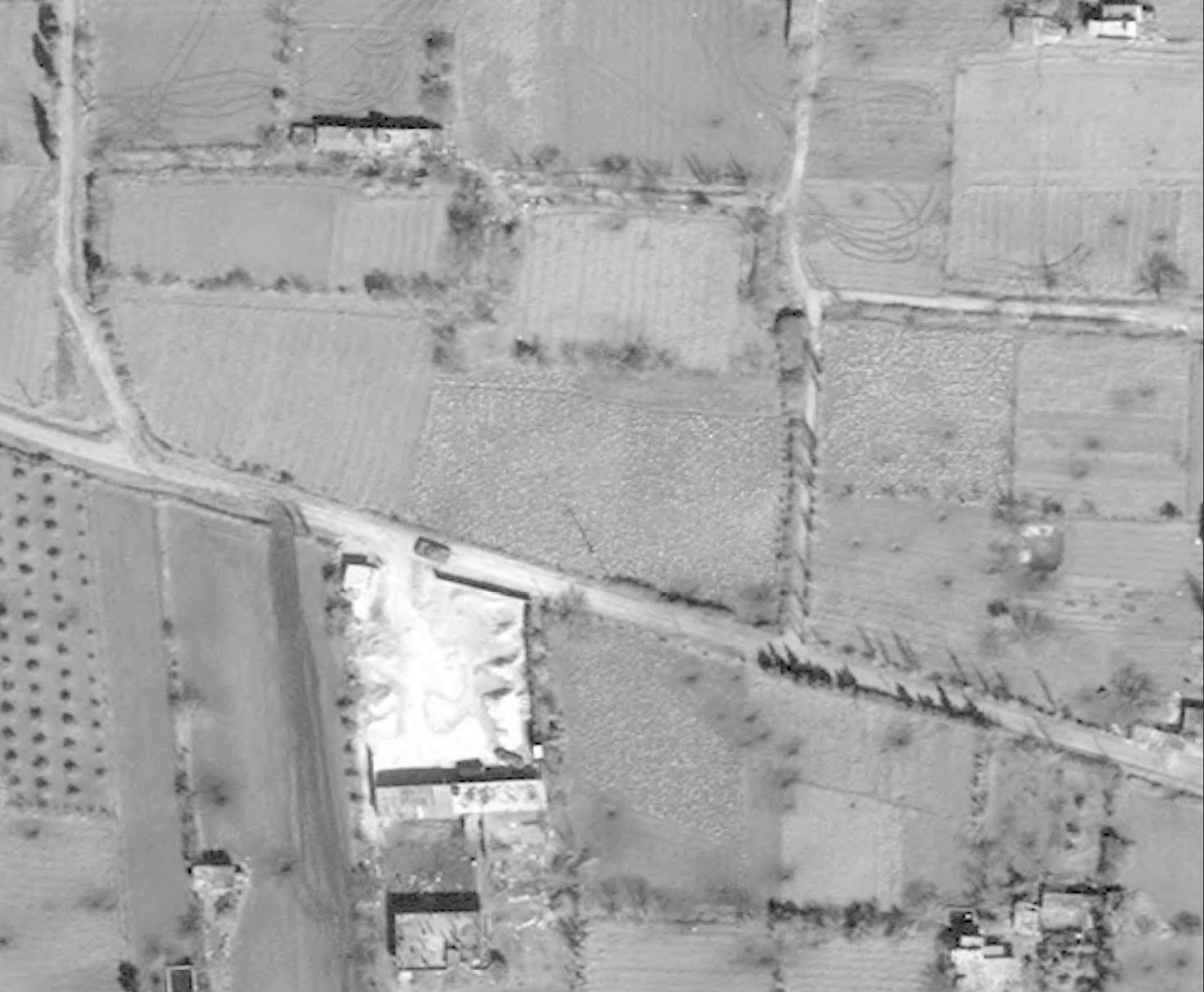 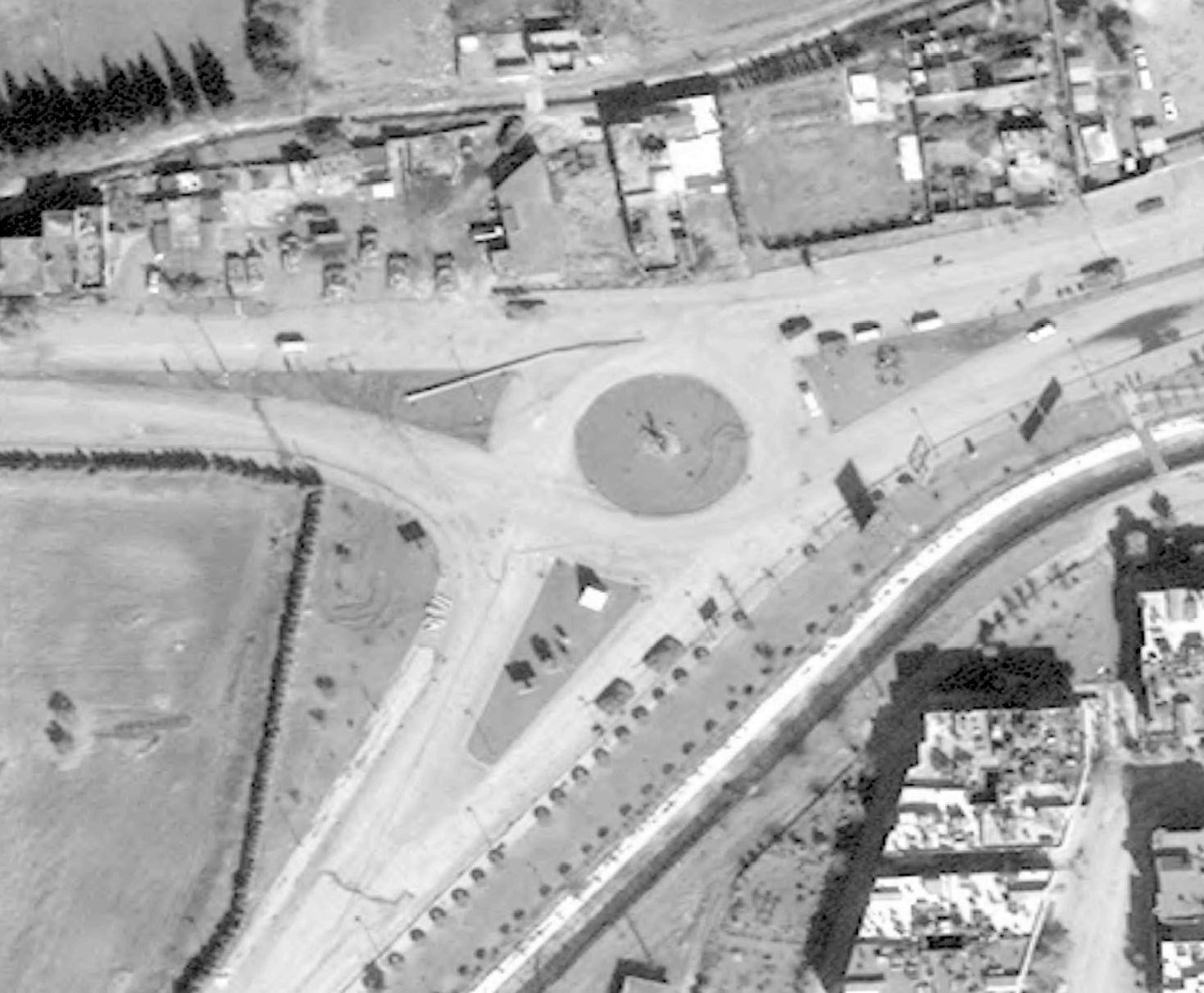 Another close-up also shows a number of large dust clouds caused by the probable impact of several shells that landed within an estimated 10 to 15 minutes before the satellite image was recorded. It also shows hundreds of smaller impact craters across the adjacent fields next to the buildings, most of which are heavily damaged. 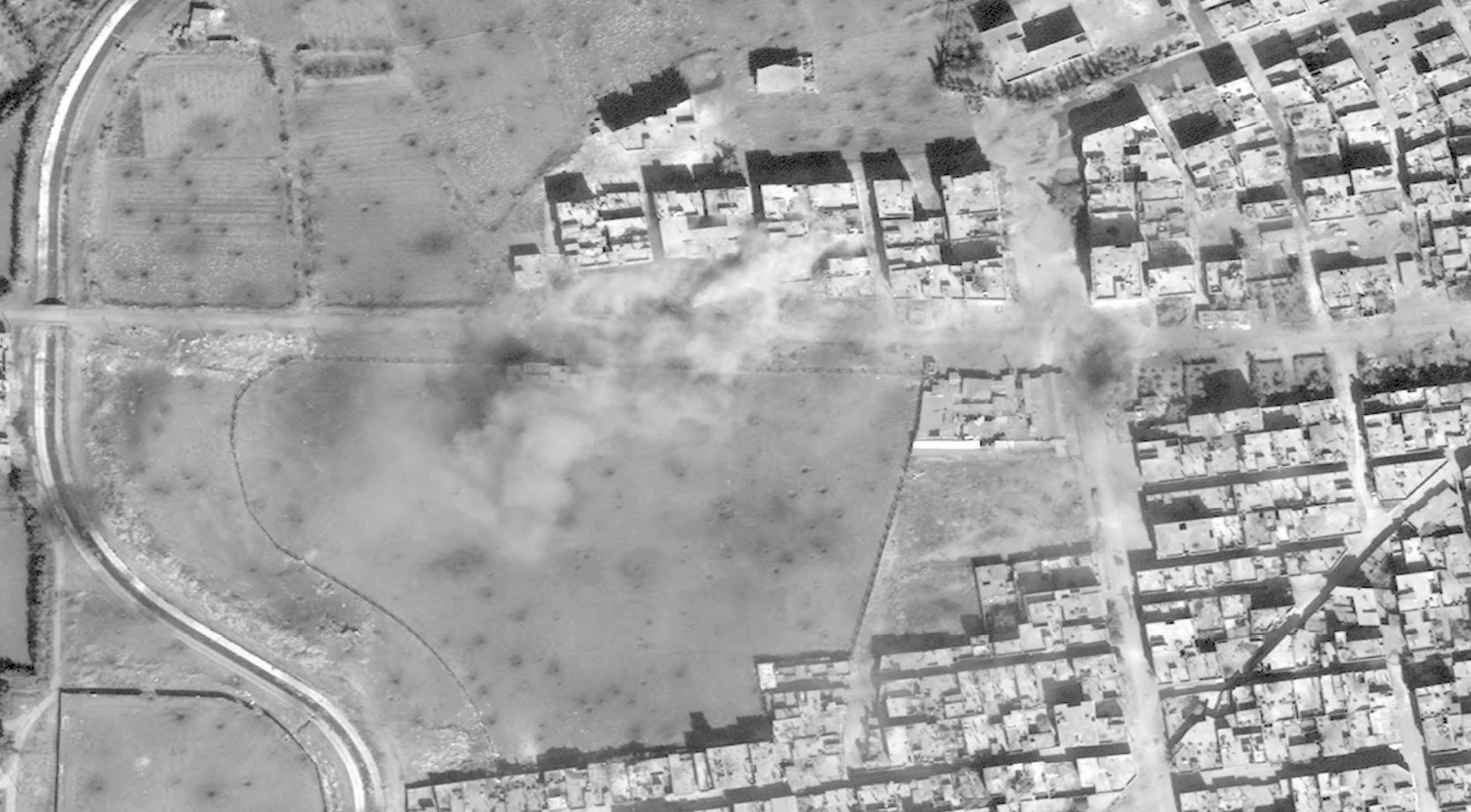 The impact of the use of explosive weapons in the neighborhood is also highlighted by the numerous unexploded projectiles shown in videos made by residents, including 122mm howitzers and 120mm mortars.

A wounded civilian from Baba Amr who escaped on February 24 described the intensity of the shelling:

On February 23 I was in my house when the whole building shook as if an earthquake had happened. I looked outside the building and saw that a rocket went through the building adjacent to mine, completely demolishing the roof. Seconds later, another rocket hit the same building destroying the second floor, and a few seconds later, a third rocket destroyed the first and ground floor. In three to four minutes the building had fully collapsed. I directly went outside to see if anyone survived. I pulled one woman but she had no legs. Her legs were cut off. As I was trying to remove another wounded person, the building on the other side of the street was hit by a rocket. The rocket’s shrapnel injured my legs and neck. I was transferred to the field hospital but they couldn’t remove the shrapnel from my neck. So they transferred me to Lebanon.

A wounded member of the armed opposition told Human Rights Watch: “The shelling generated so much damage that everyone we found inside the buildings that had been hit came out in pieces. I found a mother in Insha’at [a neighborhood north of Baba Amr] cut in half with her head missing. Her two daughters were in a similar state.”

Human Rights Watch previously documented the use by the Syrian army of Russian-made 240mm mortar systems against Homs. These systems fire the world’s largest high-explosive mortar bomb, designed to “demolish fortifications and fieldworks,” according to a Russian arms merchandizing catalogue.

A doctor in Homs and two volunteers who have transported the wounded inside Baba Amr told Human Rights Watch that many of those wounded in the shelling died for lack of proper care.

A volunteer who helped move the wounded until he was injured himself and left for Lebanon told Human Rights Watch:

At the beginning we managed to transfer the wounded outside Baba Amr during the night. But in the past two weeks it became practically impossible to do that. Every time men tried to evacuate the wounded at least two or three would get shot or killed.

After 25 days of shelling, all supplies ran low, residents reported. A man who escaped on February 24 reported: “We ran out of bread, milk for children, gas and fuel. People are using whatever is left from a destroyed building, like doors and other wooden stuff, to burn and warm up.”

Human Rights Watch urges the United Nations Security Council to pass a resolution demanding that the Syrian government end the indiscriminate shelling of cities and allow the delivery of humanitarian aid and the safe passage of civilians and the injured.

Russia and China should make clear that if President Bashar al-Assad does not immediately heed this call, they will permit further Security Council action. Such action should include targeted sanctions against officials involved in the abuse, an embargo on arms delivery to the Syrian government, and a referral of the situation to the International Criminal Court.

The UN Human Rights Council voted overwhelmingly during an emergency session on March 1 to call on Syria’s government immediately to end its attacks against civilians and allow access to UN and humanitarian agencies. Russia, China, and Cuba voted against the resolution, while India abstained. Meanwhile, Syria has so far refused to allow a visit by the UN Undersecretary-General for Humanitarian Affairs Valerie Amos.

“The existence of an armed opposition in Baba Amr cannot justify flattening the neighborhood on all its inhabitants nor can it justify denying medical care and humanitarian assistance, as these accounts and satellite imagery document,” Whitson said.