A trial under way in Russia is testing the country's commitment to ban the use of torture and evidence obtained via torture in criminal procedures. Fifty-nine men are on trial for leading an armed uprising on October 13, 2005 in Kabardino-Balkaria, in Russia's unstable Northern Caucasus region. At least 12 of them have alleged that they were tortured and then forced to sign self-incriminating statements. Medical documentation indicates that more than half were beaten.

On February 5 the judge presiding over their trial, which is still in the preliminary phase, will rule on whether these testimonies may be admitted as evidence.

The uprising reportedly resulted in more than 140 deaths, including 35 law enforcement officers, 15 civilians, and at least 92 of those involved in the uprising. The 59 defendants were charged with terrorism and other crimes, including hostage-taking, murder, and blackmail.

Many of the defendants told their lawyers they were tortured until they signed alleged confessions.

Human Rights Watch reviewed forensic examination reports for all 59 defendants. The examinations were conducted by authorities and document severe injuries that many of the defendants sustained during and after their arrest. Injuries included concussions and severe bruising, in some cases, covering their entire bodies. In most cases the causes of the injuries are noted as "blows caused by a blunt hard object at close range." The reports strongly indicate that the majority of the defendants were brutally beaten. One examination called for the detainee to be referred for an expert examination due to life-threatening injuries.

Some of the defendants have complained about the torture to the prosecutor's office and asked for the alleged confessions to be excluded from the case. The prosecutor's office conducted inquiries, but despite the forensic medical evidence, has taken at face value law enforcement officials' claims that they acted within the framework of the law. To date, it has refused to open a criminal investigation.

Russia is a party to the European Convention on Human Rights, the International Covenant on Civil and Political Rights, and the UN Convention against Torture and Other Cruel, Inhuman or Degrading Treatment or Punishment. Under all three treaties Russia has obligations to prohibit all forms of torture, inhuman and degrading treatment, to punish those who resort to such actions, and to ensure that no evidence obtained in violation of the prohibition can be used in courts.

Below are photos of four of the defendants and summaries of their forensic medical examinations: 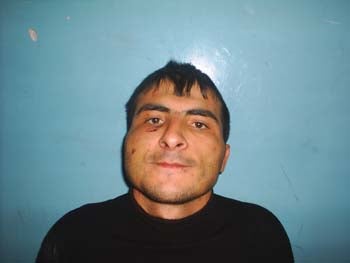 "R. Kudaev, born in 1978, received abrasions on the face, bruises on the face, extremities, rib cage, and buttocks, as well as injuries to the soft tissue on his head. These injuries were caused by hard blunt objects at close range."

According to Kudaev's mother, Fatimat Tekaeva, Kudaev was home on the day of the attack. She witnessed his arrest and told Human Rights Watch in a 2005 interview that about two dozen men dressed in camouflage and masks arrived in armored vehicles, cars, and trucks, armed with automatic weapons and sniper rifles, and swarmed onto the property. They beat Kudaev as they handcuffed him and hustled him across the yard. Three days later, his lawyer described Kudaev's wounds to a local journalist:

"Rasul couldn't hold up his head. On the right side of his face there was a large hematoma, his eye was full of blood, his head was a strange shape and size, his right leg was broken and he had open wounds on his hands."1 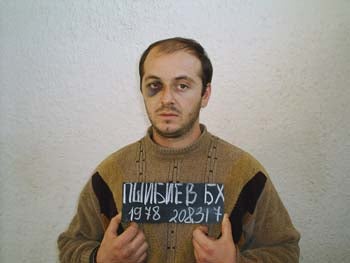 "B. Pshybiev, born in 1978, received bruises on the face, rib cage, and hands and feet. The described injuries are the results of blows caused by blunt, hard objects at close range."


"...there [Dolinsk] I was tortured, specifically they [6th division UBOP personnel] beat me with rubber sticks, a chair, and butts of machine guns; they beat me on various parts of my body (on joints and back), saying that they ought to make me an invalid. They also tortured me with electric shocks... I screamed and begged them to stop, but they didn't listen and demanded that I confess to participation in the attack on Nalchik on October 13, 2005... The torture continued for two months, two-three times a day, either at the 6th UPOB division, or in SIZO..."
- Batyr Pshybiev, undated statement 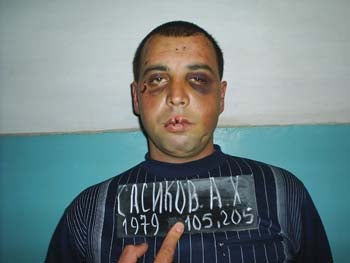 " A. Sasikov, born in 1979, sustained soft tissue damage and bruises on his face, rib cage, and neck; compound wounds on his head and face; abrasions on the face, left hand, and both feet. The wounds were the result of blows caused by blunt hard objects at close range."

"Configuration of the face is altered due to swelling of soft tissue. Crimson-blue bruises on the right eye and cheek 14x8cm, the left eye and cheek 14x10cm, on the front part of the rib cage there were several bruises with an area of 60x50cm; bruises on the chest 8x2cm, lower left side of the neck 8x4 cm, right nipple 6x11cm, an oval-shaped wound with uneven borders from the center of the forehead to the hair line. Wounds on the upper left lip 2x2cm, abrasions on the front left shoulder forming a line covered with a brown scab 4x4cm; wounds on the left temple 4x3cm, front left knee 4x1cm, and middle of the shin 3x1cm."

"I was taken to a police station to be interrogated and around 15 people ...kicked me, punched me, and beat me with their weapons... I passed out several times... and ended up waking up in a different place, where they continued the beatings in the presence of the Prosecutor's office staff."
- Anzor Sasikov, in a letter to the European Court of Human Rights, October 10, 2007 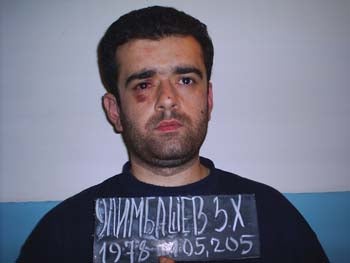 "Z. Ulimbashev, born in 1978, suffered bruises on the face, rib cage, and lower back; abrasions on the face, head, back, and left foot, caused by blunt, hard objects at close range."

"...[Several men who appeared to be law enforcement personnel] pushed us to the ground and started kicking and beating us with rifle butts. Someone kicked me in the eye; it filled with blood instantaneously, and I couldn't see out of it anymore...Later, one of them asked someone to bring a ‘telephone'. They brought a piece of electric equipment with two wires. They attached the wires to my ears and turned it on... They used the "telephone" on me several times ...I didn't care at that point, I only wanted to be left alone-so I signed where they indicated, practically without reading the protocol-I was physically unable to read it."
- Zalim Ulimbashev, in a letter to his family, October 2005

All photographs are of the men taken while in custody, received from Human Rights Watch by their families. © Private 2005