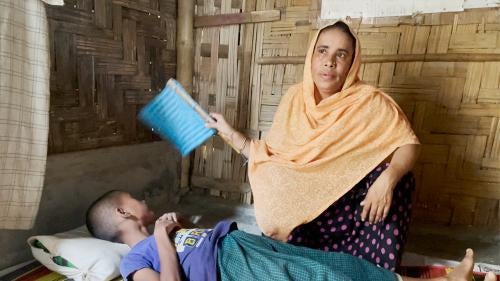 (Bangkok, August 24, 2022) – Rohingya Muslims are still awaiting justice and protection of their rights five years after the Myanmar military began a sweeping campaign of massacres, rape, and arson in northern Rakhine State on August 25, 2017, Human Rights Watch said today. More than 730,000 Rohingya fled to precarious, flood-prone camps in Bangladesh, while about 600,000 remain under oppressive rule in Myanmar.

No one has been held accountable for the crimes against humanity and acts of genocide committed against the Rohingya population. This anniversary should prompt concerned governments to take concrete action to hold the Myanmar military to account and secure justice and safety for the Rohingya in Bangladesh, Myanmar, and across the region.

[Please] open the road [border]. They [Myanmar military] are destroying everything. They are not listening to any governments. Thousands are being killed inside their houses. We do not know the count. Please look at today’s situation.

This video was filmed by a Rohingya refugee whose village was attacked by the Myanmar military in August 2017. He was pleading for media attention to get international help.

Five years ago, Myanmar’s military launched a sweeping campaign of massacres, rape, and arson against the Rohingya, a Muslim minority who have lived for generations in Myanmar’s western Rakhine State. Security forces killed thousands of Rohingya in crimes against humanity and genocidal acts.

Hundreds of thousands fled to neighboring Bangladesh, while others remained under apartheid conditions.

We walked for three days.

The houses of our [village] were burned yesterday. An Islamic scholar from Tula Toli was shot dead.

This is Abdul Halim with his mother. They are Rohingya refugees crossing into Bangladesh to escape the Myanmar military’s atrocities in 2017.

They were some of the 730,000 Rohingya who managed to reach refugee camps in Bangladesh, joining hundreds of thousands who had fled earlier violence.

When I was carrying my mother on my back, “My child, may you live long and never face any sorrow in your entire life. Might you have a perfect life.” my mother always blessed me.

After arriving here in Bangladesh with my mother, at the hospital, the doctor said to me that her condition is not good, and she may not survive. My mother died on the 16th of Zil Hajj [Arabic lunar calendar].

Now I have three children. The oldest is a daughter and the younger ones are sons.

For the past five years, the schools are not up to the standard for Rohingya children to attend. There is no formal schooling like classes 1, 2, 3, 4… so our children can’t be properly educated.

In Myanmar, they called me “Nowa kalar”, to say we are like animals. They could call us that because we had no education. Here too, we can’t give our children an education.

Bangladesh banned all Rohingya-led schools in December 2021. Teachers and parents were threatened with relocation to Bhasan Char, an isolated island, or having their ID cards revoked. The Myanmar curriculum is now being introduced, but only up to Grade 9, and is not certified.

Five years on from the atrocities against the Rohingya in Myanmar, nearly a million refugees live in overcrowded camps struggling to survive in increasingly repressive conditions.

Bangladesh should be recognized, and provided international support, for assisting Rohingya refugees.

Bangladesh authorities should respect the rights of Rohingya refugees to freedom of movement and access to work, education, and health care.

In August 2017, Myanmar security forces massacred and raped hundreds of men, women, and children in the village of Tula Toli.

Mohammad Ayaz was shot while trying to flee. At least 12 members of his family, including his parents, were killed.

Our mother and sisters were killed [in my village]. The houses were burned. They [soldiers] were shooting at us. Some of us with bullet wounds managed to escape to this area [Bangladesh].

Mohammad is now 21, and lives in a refugee camp with his aunt and uncle.

Because of sickness and the bullet wound, I’m not able to do any heavy work. I don’t know what to do.

The hospital here only prescribes paracetamol, but that doesn’t help cure me. We need to go to Cox’s Bazar or Palong Khali, but that would cost us a lot of money. The hospital inside the camp doesn’t provide proper health care.

The lack of clean water, sanitation, and hygiene has increased the risk of disease for the refugees. Restrictions on space and resources have left the camps prone to landslides, flooding, and fires, without permission to leave.

Concerned governments should step up support for Rohingya refugees.

My father died by falling down a slope because of the raining and chaos.

Hasina Hatu fled Myanmar in 2017 with her son and husband, Abul Hossain, who suffered from chest pain.

The first three years of life in the camp were so distressing. Arranging treatment for my husband was very tough. Then he died. I don’t have an adult son or husband now, so there’s no breadwinner. We are two people in the family. We have to buy extra five kilos of rice. [The aid ration] isn’t enough. Now I do some sewing work to make money for food. If we had our house and land again, if we could go back [to Myanmar], we would be happy.

In Myanmar, about 600,000 Rohingya remain trapped under a system of apartheid and persecution.

In 2021, the generals responsible for the atrocities against the Rohingya launched a coup and brutal nationwide crackdown.

The international community should pursue every avenue to hold the Myanmar military accountable and deliver justice for the Rohingya.

Rohingya Refugees in Bangladesh at Risk During Monsoon