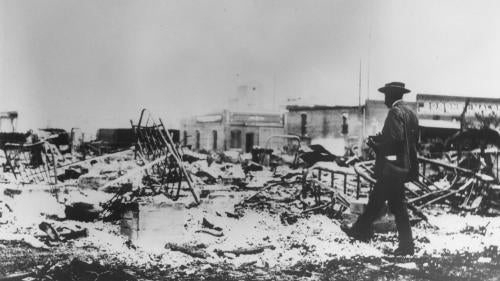 (Washington, DC) – The House Judiciary Subcommittee on the Constitution, Civil Rights, and Civil Liberties will hold a hearing, Continuing Injustice: The Centennial of the Tulsa-Greenwood Race Massacre, on May 19, 2021, ahead of the Tulsa Race Massacre’s centennial. The 9:30 a.m. hearing will examine the legacy of the massacre, remedies for the continuing harm, and the connection to the current crisis of police violence and systemic racism experienced by Black communities across the country.

State and local authorities in Tulsa, Oklahoma should provide reparations for the 1921 Tulsa Race Massacre, when a white mob killed several hundred black people and destroyed a prosperous black neighborhood. They should promptly develop and carry out a comprehensive reparations plan, in close consultation with the local community, to address the harm caused by the massacre and its lasting impact.

Greg Robinson, Community Activist And certainly, there is not a more clear example of a space where reparations is indeed needed than the Greenwood community here in Tulsa, Oklahoma.

Reverend Robert Turner, Historic Vernon AME ChurchThe whole world is watching Tulsa, right? What happened in Greenwood, is being made known all over the world.

Dreisen Heath, Human Rights Watch In June 2020, Human Rights Watch went to Tulsa, Oklahoma to support our community partners and to celebrate Juneteenth, which marks the day enslaved people were declared free in the US. The event was held in Tulsa’s historic Greenwood district, the home of what was once a thriving, wealthy Black community. Greenwood was destroyed in 1921 in one of worst cases of racial violence in the history of the US.

I stand here today, only because of the resolve of my ancestors, the unrelinquishing strength of my Tulsa family and friends and the possibilities that we can break from the chains of injustice. I was born here in Tulsa. My parents were patrons of Mount Zion which is often pictured in smoldering flames as a result of the targeted and vile racist destruction of the 1921 Tulsa race massacre.

Title: The Case for Reparations in Tulsa, Oklahoma

When I hear my family and my predecessors talk about what Greenwood was like …I have to literally close my eyes so that I can imagine it. We’re talking about a four-square mile area where it’s like a metropolis.

Kristi Williams, Descendant of Survivors of the Tulsa Race Massacre

Greenwood was a Black community who had shared principles, shared values, who loved each other, who helped each other and that’s what kept it thriving.

On May 31, 1921 a white mob invaded Greenwood, after a young Black man was falsely accused of assaulting a white woman. The mob attacked Black residents and businesses, burning down the 35 square blocks of the district in under 24 hours, looting and destroying over 1200 homes, a dozen churches, and over 60 businesses.

I guess I might have been five. I guess, I don’t know. Very small. I remember men coming through the house. They were white men. I don’t know what they called themselves. Ku Klux Klan or what they called themselves, were coming in and destroying the people’s homes, and burning them down. I heard people screaming and saw people running and hollerin’ and trying to get out of the way.

About 300 people were killed, the vast majority of them Black, and thousands of Black people were left homeless. Property damage claims from the time amount to tens of millions in today’s dollars.

As a descendant of a survivor of the Tulsa race massacre, I see my people who left and fled Tulsa in me.

They lost everything. They lost their homes, their dignity, the hope that came with them out of chattel slavery. That hope was destroyed in one night.

Because the city called this a riot and blamed the Blacks, African-Americans, my people. We couldn't collect on our insurance claims. And we know for a fact that the Black people in Greenwood couldn’t get a fair hearing. We know that. The people that they were going to go in front of, burnt them down.

A state government commission charged with investigating the Tulsa Race Massacre confirmed in a 2001 report that Tulsa officials, and the hundreds of white people they deputized, participated in the violence by looting, killing, and destroying property. No one was ever prosecuted or punished for these violent crimes.

We know that the city of Tulsa and the state of Oklahoma had a conspiracy of silence about what actually happened. I mean I went to school, right on this street, right on Greenwood and didn’t know anything about it until 1997, 1998.

And so, now all the attention that’s coming to Greenwood is something that I’ve always said, If we say their names enough, the bones will rattle the earth and people will hear it.

In the summer of 2020, the city of Tulsa finally began excavations for mass graves from 1921, exploring areas where eyewitnesses say black bodies were buried.  Neither the city nor the state has provided reparations in the form of compensation to the survivors and descendants of the massacre, as recommended by the 2001 Commission, or to the broader Black community in Tulsa. We know of three remaining survivors who are all over 100 years old so providing repair is urgent.

What are reparations? The root word means “to repair.” It’s very simple. We need to repair the damage that was done, not just in 1921 but the continual massacre that has happened ever since that day.

Even after the tremendous losses the Black community suffered due to the massacre, government officials committed no public money to help Greenwood rebuild

After the massacre, they rebuilt by 1925. And they did that in the face of white supremacy, Jane and Jim Crow and in the face of the very people who bombed and looted and destroyed and murdered blocks of a community.

At its height, the Greenwood district was 35 square blocks. In the ‘30’s, parts of Greenwood were redlined, agencies designated it as higher risk for lenders. Urban renewal led to the building of highways through the district, displacing Black families. Then authorities built OSU-Tulsa and Oneok Field, a minor league baseball stadium in the historic district of Greenwood. Today, gentrification is now encroaching on Greenwood, leaving just a small triangular area just south of the highway. Yet neither of the survivors or the descendants of the Tulsa Massacre nor the broader Black community in Tulsa, got a meaningful share of the wealth.

Urban removal, the government calls it urban renewal, I’ll call it urban removal came through this community like they did in so many other Black communities And literally destroyed Greenwood.

100 years after the Tulsa Race massacre, the city remains highly segregated with most Black people living in North Tulsa. In 2019, Human Rights Watch analyzed data around policing, poverty, and racial inequality in the city. We found that:

Black Tulsans are twice as likely to be unemployed.

And the Black poverty rate is 35%.

And I can't help but reflect back on this very ground that we're standing, what my great-grandmother, Rebecca Brown Crutcher went through, and she had to flee and fight for that same right to live in the midst of racial terror violence. I can't help but think about that continual trauma that's been passed down my family line, you know, fast forwarding to 2016 with my brother.

Time for taser I think.

Police offers running when he was innocent, needing help.

Gotta feeling that’s about to happen.

That’s a bad dude. Could  be on something.

Terence Crutcher was killed by Tulsa police in 2016.

We’re still fighting to run outside. We’re still fighting just to sit on our sofa and eat ice cream or play video games with our nephew. Or birdwatch. Our outside isn’t free. We’re fighting just to be Black in America. And I believe that Tulsa is the microcosm of part of a broader issue that we’re facing all over this nation. And if we can get it right here, right in Tulsa, I believe we can get it right everywhere.

Many cities, states and institutions across the US are attempting to come to terms with their racist past and present with local forms of reparations.

Rosewood, Florida; Evanston, Illinois and the state of California are just a few places that have taken steps to address the inequalities brought on by systemic, anti-Black discrimination. Human Rights Watch has long been supportive of reparations by the federal government to account for the brutality of slavery and subsequent racist laws and institutions. In February 2021, I testified in front of US Congress about HR 40, a bill that explores a pathway to federal reparations.

If racial justice is ever to be achieved, repair needs to be part of the equation.

With mounting pressure from the public to address systemic racism the House Judiciary Committee held a vote on HR 40 and approved it. This offers new hope that an opportunity for racial healing will finally happen in the US.

Give my people back land, give my people money that our ancestors built this country, built these corporations off their blood, sweat, tears, agony, pay them for that. Give us good policies to operate within this system.

And I believe that the Covid-19 break, coupled with what happened with George Floyd, opened up an opportunity that we can finally get to the root of all the disparities, the inequality and the discrimination which is anti-Black white supremacy

So the very fact of reparations if they ever did it, would be given, will give a sense of hope and optimism that this country that I loved for so long, finally loves me back.

“Get on the Ground!”: Policing, Poverty, and Racial Inequality in Tulsa, Oklahoma

The Case for Reparations in Tulsa, Oklahoma