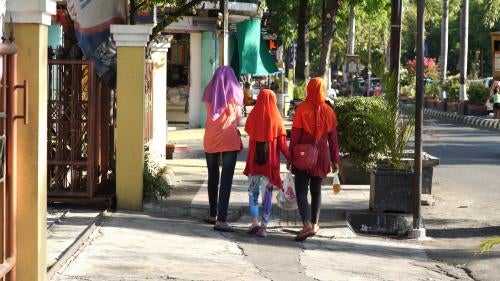 (Jakarta, March 18, 2021) – Dress codes for women and girls in Indonesia discriminate against students, civil servants, and visitors to government offices and should be revoked, Human Rights Watch said in a report released today. The government should fully enforce a February 2021 decree that bans abusive dress codes for female students and teachers in Indonesia’s state schools, and take additional legal steps to end discrimination against women and girls.

The report, “‘I Wanted to Run Away’: Abusive Dress Codes for Women and Girls in Indonesia,” documents government regulations that require girls and women to wear the jilbab, Muslim apparel that covers the head, neck, and chest. Human Rights Watch describes the historical imposition of discriminatory regulations on clothing, and the widespread bullying to wear a jilbab that causes women and girls psychological distress. Girls who don’t comply have been forced to leave school or have withdrawn under pressure, while female civil servants have lost their jobs or resigned to escape constant demands to conform.

“I Wanted to Run Away”