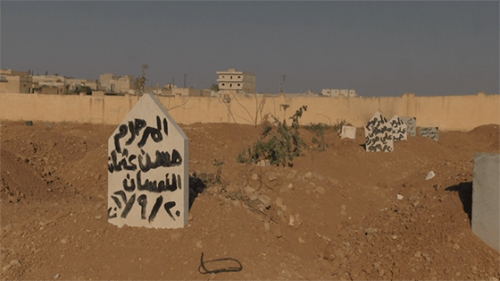 Homemade landmines have killed and injured hundreds of civilians, including dozens of children, in Manbij, a city in northern Syria. The antipersonnel mines, often called improvised explosive devices, were planted by the extremist group Islamic State, also known as ISIS, which until recently controlled the city. Most of the mines appeared to be victim-activated and therefore banned under international law.

During a five-day investigation in the city from October 4 to 9, 2016, Human Rights Watch collected the names of 69 civilians, including 19 children, killed by improvised mines in schools, homes, and on roads during and after the fighting over control for the city. The total is most likely much higher because Human Rights Watch was not able to collect information from all neighborhoods and villages. Hospital staff said that they had treated hundreds of people injured by improvised mines.

Text on screen:
This is Manbij, a city in northern Syria.
Until August 2016, it was under the control of ISIS
Before they left, ISIS planted landmines in homes, schools and hospitals, and on roads and bridges.

SOUNDBITE: Adnan, Injured by landmine
The mine exploded beneath us. All the dust came up.
At first, I didn’t feel line I was injured.
After the explosions stopped and the smoke cleared,
That’s when I felt that my leg was injured.
Everyone was torn apart.
Some had their legs blown off, others their arms. And one had his guts falling out.

SOUNDBITE: Claudia, Injured by landmine
I can only move like this.
And like this.
All of this.
My skin began to heal but I still have a bone that’s protruding.